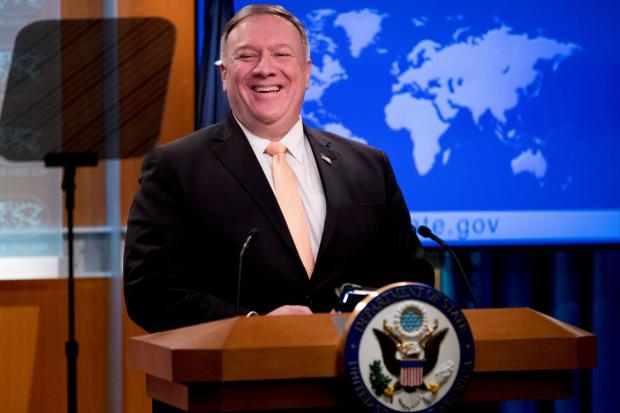 Hardball Trump regime tactics against China are pushing the envelope toward rupturing relations or something worse — possible direct confrontation.

If presumptive Dem presidential nominee Biden triumphs over Trump in November, what appears most likely, unrelenting US hardball policies toward China won't change.

His regime will likely escalate Obama's 2011 Asia pivot that was and remains all about advancing America's political, economic, and military objectives in the Indo/Pacific — notably by wanting China contained, weakened and isolated by whatever it takes to achieve these objectives.

Bilateral friction has nothing to do with a Chinese threat to US national security — everything to do with its growing political, economic, industrial, and technological prominence on the world stage.

The new millennium is China's century, an intolerable notion to both right wings of the US ruling class, seeking unchallenged dominance over other nations, wanting them transformed into client states to serve US interests over their own.

Pompeo is a loose cannon sociopath, masquerading as top Trump regime diplomat — the State Department weaponized against humanity under his psychopathological control.

His militant hostility toward China is evident whenever the topic of bilateral relations is addressed.

On Friday, he discussed what he called "Europe and the China Challenge," remarks featuring his usual litany of misinformation, disinformation, and bald-faced Big Lies.

He falsely claimed that "Europe is being forced to choose between the United States and China (sic)."

No either or choice exists.

He maintained the myth of US/Western democracy that's nonexistent, including no democratic "rising tide" in Eastern Europe, nations operating as virtual US colonies at the expense of their own people.

He defied reality by calling "capitalism…the greatest anti-poverty program in all of history (sic)."

It transformed chattel into wage slavery in the West and most other countries, a system rife with inequities that's dominated by predatory/exploitive giants — prioritizing profits over human health and welfare.

Pompeo falsely claimed that China "t(ook) advantage of (US) goodwill, what doesn't exist geopolitically or in how it treats ordinary Americans — exploited, not served.

He lied claiming China deceived the US by "assuring us they wanted a cooperative relationship" — what Beijing seeks with all nations, far different from US rage to dominate them, by brute force if other tactics fail.

All nations are obligated to protect their territory, sovereign rights, and populations from hostile and intrusive actions by foreign powers — what the law is all about.

It notably aims to counter hostile US interference in its internal affairs.

In Hong Hong, it's by disruptive made-in-the-USA protests that feature violence and vandalism, part of Washington strategy to weaken China by targeting its soft underbelly — what no nation should tolerate.

The city is no longer an exploited UK colony. Nor does Beijing tolerate foreign interference in its internal affairs — what the UN Charter and other international laws prohibit, what the US ignores in dealings with other countries.

Like Trump, Pompeo is an unapologetic serial liar, much of his time spent on mass deception.

He lied saying President Xi Jinping "greenlighted a brutal campaign of repression against Chinese Muslims, a human rights violation on a scale we have not seen since World War II."

He ignored longstanding US human and civil rights abuses from the republic's inception to the present day.

For centuries, the US has more grievously violated these fundamental rights against more people at home and abroad over a longer duration than any other country in world history.

Pompeo falsely blamed China for tensions along the country's border with India, calling its fascist Modi regime "the world's most populous democracy," a fantasy one like the US and Europe.

Pompeo lied claiming Beijing threatens China Sea waters — what the US threatens by its military presence in a part of the world not its own.

He repeated the Big Lie about the made-in-the-US coronavirus, calling it a Wuhan virus spread by China worldwide and co-opting the WHO.

He lied accusing China of "pushing disinformation and (waging) malicious cyber campaigns to undermine our governments to drive a wedge between the United States and Europe, and is saddling developing nations with debt and dependency."

He lied claiming China "strongarms nations to do business with Huawei."

He lied calling the company "an arm (of Beijing's) surveillance state."

He maintained the myth of the US prioritizing "freedom (over) tyranny" — the former abhorred by its ruling class, the latter prioritized at home and abroad.

He lied claiming China aims to "throw away the progress we in the free world have made with NATO and other institutions…and adopt a new set of rules and norms to accommodate" its interests.

He and other US hardliners want China increasingly shut out of Western markets, notably Huawei and its other tech giants — to give corporate America a competitive advantage.

Pompeo's overall aim is reversing the unstoppable tide of US decline while China and other nations are rising.

It's all about what I stressed before, the same dynamic dooming other empires.

The US is declining because of its imperial arrogance, its destructive rage for global dominance, its endless wars against invented enemies, its exploitation of ordinary people at home and abroad — and unbending refusal to change.

That's why its imperial project is inexorably heading for the dustbin of history where it belongs — unless it destroys planet earth in its rage to own it.

"China is playing an ever-growing role in global politics, and we have great interest in working together on many issues…"

The EU and Beijing are working on consummating a bilateral investment treaty before yearend — what Pompeo and other US hardliners want undermined.

"This is not at all in contradiction with the strategic outlook, which clearly said China is, simultaneously, in different policy areas, a cooperation partner with whom the EU has closely aligned objectives, a negotiating partner with whom the EU needs to find a balance of interests, an economic competitor in the pursuit of technological leadership, and a systemic rival promoting alternative models of governance."

"China and the EU are longterm, comprehensive, strategic partners."