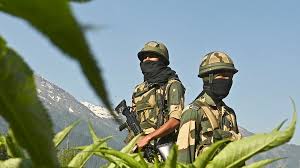 A longstanding line of control dispute along the border separating China and India flared up weeks earlier.

Both countries claim sovereignty over the disputed territory. Until April, forces of both countries hadn't used live fire for decades.

According to Indian media, the Modi government gave commanders along the line of control freedom to handle things on their own tactically.

Live fire used by forces of both countries killed and wounded unclear numbers of soldiers.

Tensions remain high, risking escalation. It's in the interests of both countries to resolve differences diplomatically.

Both sides deployed more forces along the disputed line of control.

Beijing and Delhi are trying to resolve differences. Conflict serves the interests of neither country.

"The adventurous acts of the Indian army have seriously undermined the stability of the border areas, threatened the lives of Chinese personnel, violated the agreements reached between the two countries on the border issue, and breached the basic norms governing international relations."

"China has lodged solemn representations and strong protests to the Indian side."

He stressed that Beijing urged Delhi to maintain bilateral communications and pursue efforts for mutual accommodation.

"We extend our deepest condolences to the people of India for the lives lost as a result of the recent confrontation with China."

A similar 1962 border dispute escalated to war between both countries, what neither Beijing or Delhi want now.

If skirmishes continue, they're likely be limited. Both countries best serve each other's interests as allies, not adversaries.

For the US, it's the other way around, its hardliners wanting China marginalized and weakened, a prescription for rupturing relations.

On Monday, China's Global Times reported that Beijing "doesn't want to escalate conflict with India, but (it has) sufficient capacity to smash any provocations from the Indian troops," adding:

"It's hoped that Indian troops can remain sober and Indian elites keep rational."

"It's in the India's interests to work with China to put the border disputes under control."

In 1996 and 2005, both countries signed agreements, stressing that neither side will use military force against the other.

Did Modi change India's position? After last week's clash, he sounded conciliatory, saying "(n)obody has intruded into our border, neither is anybody there now, nor have our posts been captured."

"The Chinese side (must) reassess its actions and take corrective steps."

Indian "frontline troops (must) immediately cease all provocative actions. (Delhi) must not underestimate China's firm will to safeguard its territorial sovereignty."

Modi is playing a dangerous game, allying with the US in provoking China, a reliable ally — polar opposite how Washington operates, exploiting other countries to serve its interests.

Washington's "us(e) (of) term the Indo-Pacific instead of Asia-Pacific" is all about "contain(ing) China," what Modi and other Indian officials surely understand.

There's nothing "benign" about US strategy. It's "divisive," not "inclusive."

US interest in India is co-opting its government, using it as a "counterweight" to China, aiming to undermine its economic and technological development.

Beijing is working more closely with Pakistan strategically and economically, including by construction of pipeline, rail and road links to its Gwadar Arabian Sea port.

Pretending to want differences between China and India resolved diplomatically, conflict between both countries serves US interests at their expense.

Beijing is much stronger militarily, why India's show of force is limited.

If things escalate ahead, China will force Modi to back off.

According to Beijing-based military expert Wei Dongxu, his tough talk aims to please his base — with no intention of wanting an escalated clash with a militarily superior neighbor he'll lose.

Modi won't invent a major new one by challenging China militarily, what he'll lose, gaining nothing but lots of casualties and egg on his face.

Beijing's military superiority "is why India hasn't dared to launch a full attack against the PLA in decades but keeps creating low-level tensions occasionally," Lin explained.

A statement by India's military said talks between both sides were "positive."

"There was mutual consensus to disengage. Modalities for disengagement from all friction areas in Eastern Ladakh were discussed and will be taken forward by both sides."

Clearly China wants confrontation ended. It's up to both sides to back their statements with commitment, notably the belligerent Modi regime.

You Won't Believe What's Being Used In The China-India Border Fight!