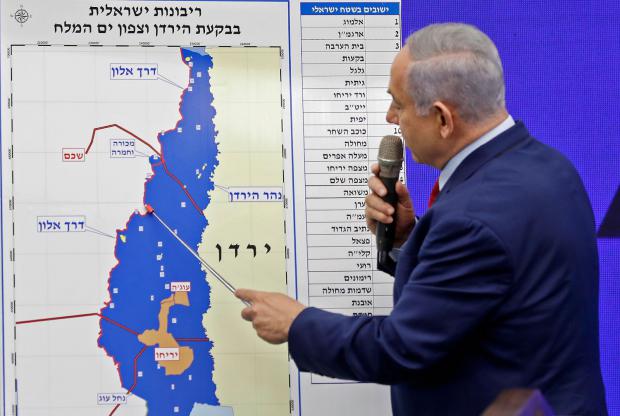 Netanyahu earlier vowed to press ahead with annexation.

Reportedly on or around July 1, he'll initially announce the annexation of what the Times of Israel called "three West Bank (settlement) blocs," not the Jordan Valley for now, adding:

"Well-placed sources told The Times of Israel last week that the joint mapping committee tasked with delineating the contours of the annexation move still had weeks if not months of work, and the IDF has not been told precisely what Netanyahu has in mind."

According to the broadsheet, there's "relative consensus, domestically and in Washington," to making the move.

Or is there? The Times of Israel added the following:

"The US initially said it would recognize annexation immediately, but subsequently appears to have at the very least tempered its enthusiasm for the controversial move before the joint mapping committee can complete its work."

"The (Trump regime) is highly unlikely to approve an Israeli move to unilaterally annex parts of the West Bank by the July 1 date envisioned by Netanyahu," according to an unnamed "well-placed source."

Annexation of historic Palestinian land in whole or in part will formally end the two-state illusion — what long ago was possible, clearly not now.

Trump regime hardliners are on board with the most extremist of Netanyahu regime policies — time and again blaming victims of US/NATO/Israeli high crimes for what's committed against them.

At most, Trump and Pompeo et al may only press Netanyahu to slow, not abandon, illegal annexation of Palestinian land.

It's highly unlikely that Biden will soften US policy toward long-suffering Palestinians if he succeeds Trump in January.

Throughout his time as US senator and vice president, he one-sidedly supported Israel, including three preemptive wars on Gaza based on Big Lies.

They warned that it'll "normalize Israel's colonial project and amounts to apartheid via the continued expansion and construction of illegal settlements, displacement and dispossession of Palestinians, and demographic manipulation," adding:

"The Israeli plan would further entrench racial, ethnic, and religious segregation as a legal norm, and Israel will formally establish itself as the sole sovereign regime over the Palestinian people in historic Palestine."

On the same day, 47 UN special rapporteurs denounced the annexation scheme as "a vision of 21st century apartheid."

A presentation by Cairo Institute for Human Rights Studies' international advocacy officer Nada Awad to the UNHRC on behalf of Adalah and the four Palestinian human rights groups said the following:

"Last month, in the midst of the coronavirus pandemic, Israel swore in a new government seemingly committed to formally annexing parts of the occupied Palestinian territory (OPT) in the West Bank in July, in a blatant violation of international law."

"This annexation, part of the so-called Trump-Netanyahu 'Deal of the Century' and the Netanyahu-Gantz coalition agreement, normalizes Israel's colonial project and amounts to apartheid via the continued expansion and construction of illegal settlements, displacement and dispossession of Palestinians, and demographic manipulation."

"The principles of this plan are enshrined in Israel's Jewish Nation-State Basic Law enacted in July 2018."

"This law established a constitutional order based on systematic ethnic supremacy, domination, and segregation in the so-called 'Land of Israel' and the denial of the realization of national self-determination for the Palestinian people."

"Article 7 of this law provides that Jewish settlement is a national value to be encouraged and strengthened, giving the state authorities further constitutional legal tools to justify the illegal settlement enterprise in the occupied Palestinian and Syrian territories."

"This law intends to justify as constitutional segregation in land and housing that targets all Palestinians in historic Palestine, including Palestinians citizens of Israel, who have suffered decades of systematic oppression."

"Annexation would further entrench racial, ethnic, and religious segregation as a legal norm."

"In this context, Israel will formally establish itself as the sole sovereign regime over the Palestinian people in historic Palestine."

"We call on the UN and the international community to call for the dismantling of all settlements, to vehemently oppose any annexation, and to guarantee the right of the Palestinian people to self-determination, including the right of return to their homes and property."

If annexation proceeds as planned, the West Bank will resemble Gaza, a second open-air prison for a bludgeoned into submission people.

On Monday, thousands of Palestinians rallied in Jericho against Netanyahu's annexation scheme.

Dozens of foreign diplomats joined them, including Nickolay Mladenov, UN special coordinator for Middle East peace — a position accomplishing nothing because of the US/Israeli regional imperial project.

As long as Washington supports Israeli aims, views of other nations never made a difference because a price to pay by the world community on its ruling authorities for the worst of their high crimes was never imposed.

The so-called peace process was and remains a colossal hoax, a notion the US, NATO and Israel reject.

Yet the illusion of what never was and isn't now persists, establishment media, Western officials, and UN secretary general fostering it.

Palestinians were abandoned over a century ago by the infamous Balfour Declaration, the beginning of the end of historic Palestine.

Generations of political, military and cultural repression of its people followed, including dispossession from their land, other property, their fundamental rights, and in countless thousands of cases their lives.

Establishment of a nation for Jews on stolen Palestinian land was and remains a scheme to advance Western interests in the oil-rich region.

It led to over 100 years of endless conflict, occupation, dispossession, and repression, along with social and cultural fragmentation,

Historic Palestine and rights of its people were and continue to be abandoned in deference to Western/Israel regional control.

Palestinians are largely on their own, resistance their only option, staying the course no matter the long odds against them.

It's much the same in the West as in the Middle East and Occupied Palestine.

Ordinary people are largely on their own to press for positive change they'll never get any other way.