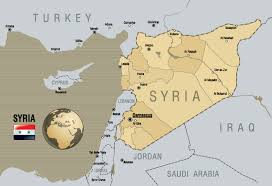 NYT-led propaganda war on Syria has been raging since Obama regime aggression was launched on the country in March 2011.

In its 9th year, US rage to transform Syria into a vassal state, eliminate an Israeli rival, and isolate Iran regionally failed.

Yet endless war continues because both right wings of the US one-party state reject resolution in all its war theaters.

Along with pursuing its imperial objectives, they feed the diabolical US military, industrial, security, media complex — at the expense of world peace, the rule of law, and a nation safe and fit to live in.

Establishment media reports on what remains ongoing in war-torn Syria are some of the most abysmal in modern memory — bearing no relation to reality on the ground.

US-led aggression, supported by NATO, Israel, and the Saudis is called "civil war" — despite nothing remotely "civil" about what's going on.

At the request of Damascus, Russia has been involved in combatting terrorists in the country since September 2015.

The vast majority of Syrians want no one else leading them. They blame the US, Israel, other foreign dark forces and jihadists they support for endless war.

Most parts of the country were liberated. Terrorist infested Idlib province remains the remaining key hot spot, along with other parts of the country where jihadist pockets exist — as well as northern and southern areas illegally occupied by US forces, using bases to train ISIS and likeminded elements to continue endless war in the country.

"The Syrian people do not accept meddling in their internal affairs.  So we say to Washington: President Bashar Assad will remain in power for as long as the Syrian people would want him to," adding:

The Obama and now the Trump regime want governance imposed on Syrians that "corresponds to the American and the Israeli views."

"(O)ur people will only accept (rule that complies with) national aspirations…This choice belongs to" them alone, never to a foreign power in flagrant breach of international law.

It stipulates that nations may not interfere in the internal affairs of others for any reasons other than in self-defense if attacked.

Syria is at war with no other nations, threatening none. The US and its imperial partners are at war on humanity.

"For nine years, Mr. al-Assad has relied on brute force to beat back the rebels who sought to end his family's decades-old grip on power (sic)."

"But now, with the war's biggest battles behind him, he faces new threats that he cannot bomb his way out of or count on his few allies to help him surmount (sic)."

The Times ignored US-supported ISIS and other jihadist proxy forces in the country — recruited, armed, funded, trained, and directed by the Pentagon and CIA.

The "new threats" it referred to are tough new illegal sanctions imposed on the country by congressional legislation signed into law by Trump.

It has nothing to do with protecting Syrian civilians, everything to do with starving and otherwise immiserating them into submission — a flagrant violation of international and US constitutional law.

The measure threatens sanctions on nations, entities and individuals that maintain legitimate economic, financial, military, and intelligence relations with Damascus.

It imposes a hardened illegal blockade on the country — similar to US state terror on Iran, Venezuela, North Korea and other countries, aiming mainly to harm ordinary people.

The NYT and other establishment media applaud these illegal actions.

They never met a US war of aggression they didn't cheerlead.

By supporting what demands condemnation, they're complicit as accessaries to US high crimes of war, against humanity and genocide.

Washington Post anti-Syria hit pieces are some of the worst.

Calling overwhelmingly popular Assad-led government a "brutal dictatorship" is typical of how it turns reality on its head in reporting on governments the US wants toppled — including by falsely calling protests in Damascus an expression of opposition to Assad.

Iran's Press TV, a reliable source of news, information and analysis, explained what US and other Western media suppress, saying:

It was "against Washington's sanctions," not Assad and his government.

"(T)housands of demonstrators chant(ed) slogans against the United States while waving Syrian flags and images of Assad in a show of support for his government."

What the NYT, WaPo, and other Western media should report, they suppress, fake news featured instead.

Similar anti-US protests were held elsewhere in Syria, including in Sweida in the southwest near the Jordanian border.

The vast majority of Syrians support their government and the country's military involved in combatting US-supported jihadists.

Unexplained by Western media is that the US is waging all-out hot, economic, sanctions, and propaganda war on the Syrian Arab Republic.

Its government and people survived over nine years of US-led aggression.

According to Press TV, Damascus "insists that the economic situation in Syria will improve as the country is emerging from years of devastating" war.

Russia and Iran are helping, the US, Israel, and their imperial allies losing.

Their strategy is to inflict maximum suffering on the Syrian people, a war crime against the entire population.

Similar tactics are used against all US adversaries, state terror in various forms.

It reflects what the scourge of imperialism is all about, the US by far the most egregious abuser in world history — waging permanent war on humanity from inception, risking nuclear war that could end us all.