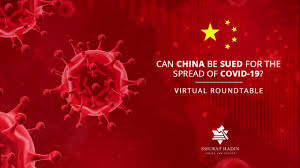 According to Courthouse News,  Senate Judiciary Committee members discussed "amending the Foreign Sovereign Immunities Act (FSIA) in order to hold China accountable for injury, losses and damages related to the outbreak of the novel coronavirus."

More on this below.

An earlier article explained that no evidence suggests that COVID-19 originated in a Chinese lab or from bat-eating Chinese people.

Most likely, the misnamed "Wuhan virus" originated in a US biolab, Fort Detrick, MD the likely facility.

In all its preemptive wars on nations threatening no one, the US uses chemical, biological, radiological, and/or other banned weapons.

In 1975, the Senate Church Committee confirmed from a CIA memorandum that US bioweapons were stockpiled at Fort Detrick, MD – including anthrax, encephalitis, tuberculosis, shellfish toxin, and food poisons.

Evidence shows that the SARS-Cov-2 virus that produces COVID-19 disease originated in the US last summer.

It showed up in France and elsewhere in Europe last year before infecting Chinese nationals in late December.

Most likely it was exported by the US abroad, unleashed on Americans as well.

What's gone on for months is all about engineering the greatest ever wealth transfer from ordinary Americans to privileged ones and corporate favorites.

Tens of thousands of small, medium, and some large firms that filed for bankruptcy enables them to gain greater market share by eliminating competition.

On Wednesday, a record number of US COVID-19 cases were reported — over 36,000, mostly in states that lifted lockdown and social distancing restrictions.

Texas Gov. Gregg Abbott said hospitalizations in the state are "at an all-time high…coronavirus (outbreaks) spreading…across the entire state…"

It's likely to be repeated in other US states. Large gatherings are petri dishes for outbreaks, notably because many people show up unmasked.

Reopenings aren't the key problem. It's failure of individuals to take appropriate precautions that include mask-wearing in public places, social distancing, proper hand-washing, and taking the highly contagious coronavirus seriously.

Everyone is responsible for his and her own well-being. Transmissions are increasing for failure to do the right things.

I've seen it firsthand on Chicago streets, including many unmasked individuals, outdoor dining with people seated to close together for maximum business, unsafe gatherings, and overall eagerness to restore  normality at a time of very abnormal conditions.

Mask wearing in my residential building is mandatory outside individual apartments.

Based on what I've observed visually in public, things are largely anything goes.

According to the Chicago Tribune, there were 715 new Illinois COVID-19 cases Wednesday, 64 deaths from the disease.

Gov. Pritzker has "no plans to quarantine visitors from states with spiking infection rates," said the broadsheet.

Beginning Friday, "(g)atherings of up to 50 people will be allowed across the state," a worrisome sign with outbreaks surging in states following the same pattern.

"According to the (city's)  reopening plan, schools, child care programs and restaurants are allowed to resume a range of services and activities as long as they follow public health guidelines."

"Movie theaters, health clubs and retail stores will also be allowed to open with limits in place for capacity."

"Employees at 'nonessential' businesses are allowed to return to work…"

Will Illinois be the next US hot spot, especially Chicago with its large population?

Falsely blaming China for coronavirus outbreaks in the US is all about diverting responsibility away from where it belongs.

The US 1976 Foreign Sovereign Immunities Act (FSIA) deals with under what circumstances foreign nations can be sued in US federal, state, or local courts — even when the legitimacy of taking this step is questionable.

It's why the American Bar Associations wants FSIA changes enacted.

Suing Beijing for what it had nothing to do with initiating is a non-starter.

China's Global Times called the scheme "international hooliganism," a way to divert attention from the Trump's failure to deal with outbreaks effectively, along with its indifference toward public health and welfare.

On Tuesday, the US Senate Judiciary Committee heard testimonies from state officials.

"We must hold China accountable now so that they and all other nation-states will know that we will not allow them to act with impunity (sic)."

No evidence was cited backing Fitch's claims because none exists.

Yet anti-China class action suits have been filed in at least Mississippi, Missouri, Nevada, Florida, and California, seeking trillions of dollars in damages.

According to Law Professor Chimene Keitner:

"(A)ny scholar or practitioner with working knowledge of the law of foreign sovereign immunity (knows) that there is no basis for jurisdiction in a US court" for these lawsuits.

As for amending FSIA to facilitate anti-China suits, Keitner said it won't work and will highlight US culpability for earlier viral outbreaks, adding:

Public attention in the US should focus on questionable actions by its federal officials.

It's a "bill to amend the Foreign Sovereign Immunities Act (FSIA) to establish an exception to jurisdictional immunity for a foreign state that discharges a biological weapon, and for other purposes."

Aimed at China, Govtrack said it has a "3% chance of being enacted according to Skopos Labs."

In late May, China's Foreign Minister Wang Yi dismissed the notion of litigation against the country for COVID-19 outbreaks, saying:

"Those unwarranted lawsuits against China over the COVID-19 have zero basis for fact, law or international precedence," adding:

Beijing will respond with appropriate countermeasures, including if unacceptable US sanctions are imposed.

"The Chinese side urged the US side to stop blaming and smearing China, stop pushing forward anti-China bills and stop acts of abusing litigation against China and focus on safeguarding American people's lives and health."

"There are no general legal duties and obligations that apply to China as a violation of international law" related to COVID-19 outbreaks.

"(N)ational courts are not competent to entertain an international dispute between states."

"(I)ndividual complaints in domestic courts have no legal basis so China can invoke its immunity from such jurisdiction."

"The doctrine protects the Chinese government or its political subdivisions, departments, and agencies from being sued without its consent in any country including in the United States."

The International Court of Justice (ICJ-World Court) is the proper legal venue for settling disputes between nations.

Neither the US or China recognizes its jurisdiction so neither country can use it to sue another nation.

Nor is the International Criminal Court (ICC) a venue to sue China for COVID-19 damages or anything else.

Its mandate is solely to prosecute individuals (not nations) for crimes of war, against humanity, genocide and aggression.

The UN Security Council can't be used to target China for any reason. Its veto power negates any attempt.

According to Poorhashemi, "no national or international court (is legally) competent to bring a claim against China."

He added that in times of a pandemic that "affect(s) all of humanity…(t)he principle of cooperation has been considered as one of the cornerstones of international law."

"(A)ll states have an obligation to cooperate in such a situation collectively" to protect public health.