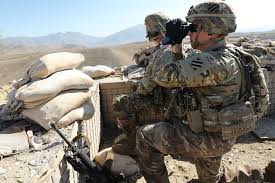 Big Lies take on a life of their own when drummed into the public mind by establishment media.

When repeated enough, they get most people to believe almost anything, no matter how unlikely or implausible.

No matter how often ordinary Americans have been duped by propaganda, they're easy marks to be fooled again.

Long before the age of television and the Internet, famed US cowboy humorist/vaudevillian Will Rogers once quipped:

"All I know is just what I read in the papers, and that's an alibi for my ignorance."

More on the Russiagate connection below.

"Baseless and anonymous accusations (published by @nytimes) of Moscow as mastermind behind killing of US soldiers in Afghanistan have already led to direct threats to the life of employees of the Russian Embassies in Washington DC and London."

"In the absence of reasons to #BlameRussians, @nytimes is there to invent new fake stories."

Kremlin envoy to Afghanistan Zamir Kabulov slammed the report as "an outright fake that even Trump (and those around him) denied."

Its aim is maintaining permanent US occupation of the country.

Pentagon troops, US private military contractors, and jihadist proxies came to Afghanistan and other US war theaters to stay —part of its permanent war agenda.

Supported by both militant wings of the one-party state, it's all about seeking control over planet earth, its resources and populations — wars by hot and other means its favored strategies, a new era of peace and stability long ago ruled out.

Kabulov stressed that "there are forces in the United States who do not want to leave Afghanistan."

Producing fake news about a Russia-Taliban connection to kill US forces is the latest dirty trick to assure they stay.

Director of National Intelligence John Ratcliffe backed Trump's assertion that he was told nothing about bounties to Afghan fighters by Russia, saying:

"I have confirmed that neither the president nor the vice president were ever briefed on any intelligence alleged by the New York Times in its reporting," adding:

The NYT report "and all other subsequent news reports about such an alleged briefing are inaccurate."

A Pentagon statement said proof of a Russia-Taliban connection to kill US forces doesn't exist.

The Pentagon "continues to evaluate intelligence that Russian GRU operatives were engaged in malign activity against the United States and coalition forces in Afghanistan," adding:

"To date," its intelligence "has no corroborating evidence to validate the recent allegations found in open-source reports" — notably from the NYT.

Information to protect US forces abroad "is shared throughout the national security community, and with US allies, as part of our ongoing efforts to ensure the(ir) safety…"

Her statement said nothing about an alleged Russia-Taliban connection to harm US forces, suggesting the claim is false — based on information available to Langley.

Endless US war in Afghanistan continues after nearly two decades.

What possible benefit could Russia gain by collaborating with the Taliban to kill US forces?

Conflict resolution is in its interests, along with an end of US occupation of the country.

Russia is the world's leading proponent of peace and stability among major powers.

No evidence whatever suggests it's done anything to promote or perpetuate wars anywhere.

Lots of evidence shows its peace initiatives to resolve conflicts between warring nations and factions.

Omitted from the fake news report by the Times and other establishment media was information explaining the above.

With November elections in a few months, the US political season is well underway.

The phony NYT claim of a Russia-Taliban connection to kill US forces in Afghanistan is the latest chapter in the long ago debunked Russiagate hoax.

The Big Lie that refuses to die is all about delegitimizing Trump's 2016 election, wanting him defeated in November.

There's plenty about him to criticize, wanting better relations with Russia a good thing to be praised, not slammed — even though his motive likely relates to pursuing business interests in the country.

Russiagate in old and new forms aims to make him a one-term president.

Falsely portraying him as a Putin puppet is part of the diabolical plot.

According to Real Clear Politics, Trump is behind by 9 points — based on an average of mid-to-late June polls.

If the US presidential election was held today, he'd lose by a landslide.

Given the economy's dismal state at a time of record-high COVID-19 outbreaks in recent days, his prospect for turning things around in his favor look slim.

Triumphing over Hillary in 2016 when economic conditions were stable was world's apart different from now.

Americans most often vote with their pocketbooks.

With real unemployment at around 35%, benefits for the jobless to expire in a few weeks if not renewed, new claims for unemployment exceeding one million for 14 straight weeks, and unparalleled dire US economic conditions for most Americans, Trump tenure as president seems likely to end in January.