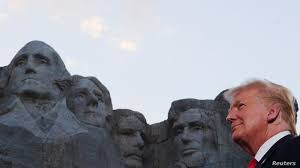 Half a century ago I visited the site with my family.

We were relocating to Chicago from California in mid-1969. It was along the northern route we took.

The move was related to my small family enterprise to begin a midwestern operation at a time when our business flourished.

Things were world's apart from today's dismal environment, not knowing at the time that Chicago would become our permanent home.

We should have skipped what Cheyenne River Sioux Nation chairman Harold Frazier called a monument to "our molesters," adding:

"Nothing stands as a greater reminder to the Great Sioux Nation of a country that cannot keep a promise of treaty than the faces carved into our sacred land on what the United States calls Mount Rushmore."

"Lakota (people) see the faces of the men who lied, cheated, and murdered innocent people whose only crime was living on the land they wanted to steal."

"This brand on our flesh needs to be removed and I am willing to do it free of charge to the United States, by myself…"

His July 3 campaign address at the site came at a time when public gatherings are hazardous to human health and should be avoided because of COVID-19 contagion.

Social distancing should be practiced in public while the threat remains.

Unmasked thousands turned out to hear unmasked Trump deliver remarks not worth hearing.

Nor are hardly any by politicians on the stump, especially when supporting policies demanding rejection and campaigning for reelection, making hollow promises to be broken in office.

Ignored in his remarks was US Independence Day Hypocrisy.

For the nation's founders, "(w)e the people" meant them and other members of its privileged class, not ordinary people to be exploited, not served — notably the state of the nation today.

They created a government of men, not laws, a nation of, by, and for the interests of its owners.

They were disenfranchised until adoption of the 19th Amendment, ratified in August 1919 — 132 years after the nation's founding.

My mother was disenfranchised when initially eligible by age.

None of the 55 framers believed the Constitution was the glorious achievement it's portrayed to be. Only 39 signed it.

Falsely considered the father of the Constitution, James Madison was a minor figure at the time.

What went into its creation is known because of extensive notes of proceedings he kept.

Added five years after its adoption, the Bill of Rights (the first 10 amendments) were and remain all about protecting the interests of the nation's privileged class exclusively.

Ambassador to Britain at the time, leading constitutional theorist John Adams disapproved of what Alexander Hamilton called "a shilly shally thing," what other critics called no masterpiece of political architecture, far from it.

Jefferson believe the nation's founding document to be updated every 20 years to make it relevant to the times.

Its 27 amendments fell way short, the last one ratified over 28 years ago.

Expanding America from "sea to shining sea," Alaska and Hawaii added later was part of the nation's imperial project.

It's ongoing today globally at the expense of peace, equity, justice, and the rule of law — along with abandoning fundamental rights of ordinary people everywhere.

The supreme law of the land never deterred the US government from doing what it pleases extrajudicially, operating exclusively by its own rules, making them up along the way as the nation's ruling class sees fit.

So-called elections are farcical when held, creating an illusion of democracy, never the real thing.

America today is a plutocracy and autocracy, remaining freedoms slipping away, things hurtling toward full-blown tyranny.

The dismal state of the nation is too debauched to fix. Elections assure continuity, not positive change

And more more thing. World peace and stability over endless US wars of aggression against invented enemies is vitally needed, especially in the thermonuclear age.

From inception to today, America has been and remains a belligerent state.

At war on humanity at home and abroad with no end of it in prospect without challenging authority for change not possible any other way, the nation I grew up in was never beautiful.

Today it's unsafe and unfit to live in. The celebratory holiday weekend masks the unparalleled harm its ruling class inflicts on countless millions of people at home and abroad.

As for Trump's Friday remarks, below is a sample their lowlights:

A figure contemptuous of heroic efforts by US doctors, nurses and other medical professionals on the front lines of helping COVID-19 patients, his remarks ignored how much harder their task is for lack of all-out federal aid not forthcoming.

He maintained the myth of a nation dedicated freedom it disdains.

No ordinary "American…should swell with pride…"

None "should cheer with delight (and) be filled with joy…"

No one should accept the myth of "liv(ing) in the most magnificent country in the history of the world…soon (to) be greater than ever before (sic)."

Even by Trumpian standards of  political chicanery, his Friday remarks were way over-the-top.

No "justice, equality, liberty, and prosperity" exists in the US for the vast majority of its people.

One of my early articles was titled Holiday Hypocrisy, discussing the nation's federal ones.

I quoted a line from Gilbert & Sullivan's HMS Pinafore, saying:

"Things are seldom as they seem. Skim milk masquerades as cream."

Democracy in America is pretense, never the real thing.

From inception to now, it's always been this way with fleeting moments of positive change.

The state of the nation today is dismal, notably for tens of millions unemployed, most working Americans way underemployed.

Nothing in prospect suggests positive change ahead.

The notion is banned by both right wings of the one-party state — along with prioritizing endless war on invented enemies, peace and stability shunned.