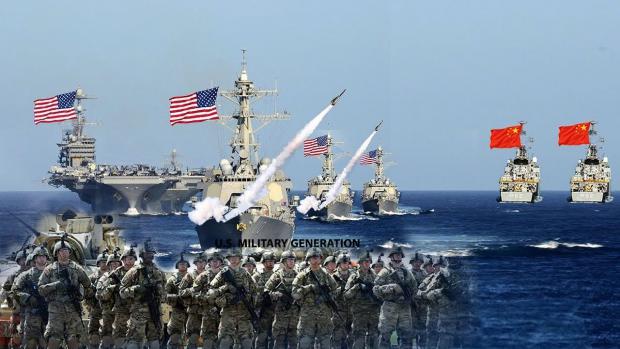 Imagine how the US and world community would react if Chinese, Russian, or Iranian warships conducted military exercises in the Gulf of Mexico or off America's east or west coasts.

Bipartisan hardliners in Washington and establishment media might consider this action a casus belli.

Clearly it would provoke a sharp US reaction, including possible interdiction of foreign ships by Pentagon ones, risking a possible clash that could lead to something much more serious.

Numerous times before, Pentagon warships conducted provocative drills in the South China Sea and other parts of the world where they don't belong —their presence posing a threat to regional countries.

In response to legitimate Chinese military exercises in its own waters, the Pentagon falsely accused Beijing of "the latest in a long line (of actions) to assert unlawful maritime claims and disadvantage its Southeast Asian neighbors in the South China Sea (sic)," adding:

The US will continue to monitor Chinese military activity — in a part of the world where US forces close to its borders are a hostile presence.

"Reality has proved once again that the US is the biggest facilitator of the militarization of the South China Sea, and is a troublemaker for the region's peace and stability," adding:

"The PLA will remain on high alert, and adamantly safeguard national sovereignty, security, and development interests, as well as the peace and prosperity of the region."

In response last May to US Naval Institute encouragement of privately owned ships to seize Chinese merchant vessels, the PLA slammed the call as promoting "act(s) of piracy," adding:

"These actions are criminal activities explicitly prohibited under international laws, and will absolutely receive joint opposition and a severe backlash from the international community."

A previous article explained that for the first time since the pre-1990 Cold War ended, three US aircraft carriers with other Pentagon warships are patrolling Asia/Pacific waters.

Two US aircraft carriers, the Reagan and Nimitz, are holding large-scale military drills in the South China Sea close to its waters, along with four other Pentagon warships.

Their stated purpose is to challenge what they called Beijing's unlawful territorial claims (sic).

Two mainland USA Barksdale air force base, nuclear-capable, B52 warplanes that refueled in Guam are involved in the exercises, a statement by US 96th Bomb Squadron commander Lt. Col. Christopher Duff, saying:

"Bomber Task Force demonstrates US capability to rapidly deploy to a forward operating base and execute long-range strike missions," adding:

"This sortie demonstrates our ability to reach out from a home station, fly anywhere in the world, and execute those missions, rapidly, regenerating from a forward operating base and continuing operations."

Over the weekend, a US Navy statement said Pentagon military exercises in the South China Sea aim to protect against "possible attacks by the enemy" — at a time when no US foreign threats exist, so they're invented to justify what's unjustifiable.

What's going on is a provocative Pentagon show of force far distant from US territory in a part of the world where its forces don't belong.

According to an unnamed Chinese military expert, "(t)he US is saying one thing and doing another. It is applying different standards on China's actions than it does on its own."

China's Foreign Ministry earlier called US Asia/Pacific military exercises Pentagon "flexing of muscles…thousands of miles away" from its homeland.

Reportedly since South China Sea arbitration in 2016, the Pentagon refrained from multiple aircraft carrier exercises in its waters — the last one in 2014 until now.

According to retired PLA naval officer Wang Yunfei, "China's resolve to safeguard its territorial integrity, sovereignty and maritime interests will not waver (despite) the latest threat posed by the US."

"The Chinese military is prepared and will deal with the (the US provocation) with ease."

"The South China Sea is fully within the grasp of the PLA. Any US aircraft carrier movement in the region is at the pleasure of the PLA."

The Pentagon's global empire of bases and provocative actions against sovereign independent nations China, Russia, Iran, and others risk increased US war on humanity than already.

Instead of being the world's leading proponent of peace, stability, and the rule of law, the US prioritizes dominance over other nations by whatever it takes to achieve its aims.

Shipments Of 20,000 Fake IDs From China Seized By Feds Ahead Of Election