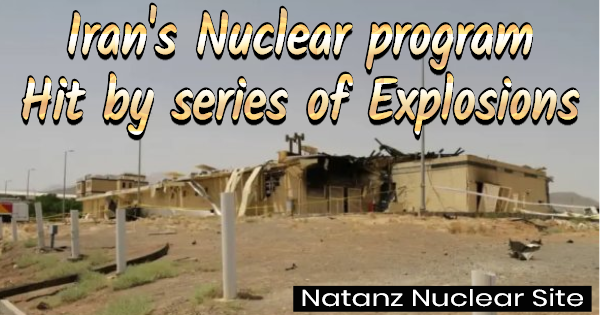 A previous article discussed blasts including a fire, reportedly caused by an explosion (possibly triggered by a cyberattack), responsible for extensive damage to its Natanz nuclear site last week.

"Fortunately, there were no casualties, no radioactive radiation and no impact on our activities in the country's peaceful nuclear program."

"Certainly, if we come to the conclusion that there has been foreign interference in this incident, we will respond appropriately."

Days earlier, a report by the Kuwaiti Al-Jarida broadsheet said Israel was behind the Natanz attack, caused by a "cyberattack" on the facility's computers that control pressure gauges inside gas containers.

"Considering that this so-called incident happened just a few days after the explosion near the Parchin military base, the possibility of sabotage cannot be ruled out," adding:

"Also, the Natanz enrichment facility has been targeted in the past by (an Israeli Stuxnet) computer virus."

On Tuesday, Ali Rabiei urged the world community to respond to Israeli actions against Iran, saying the following:

"This method Israel is using is dangerous, and it could spread to anywhere in the world," adding:

"The international community must respond and set limits to these dangerous actions by the Zionist regime."

His remarks related to multiple blasts in Iran this month, clearly blaming the Netanyahu regime for what happened — likely signed off on by Trump regime hardliners.

On major regional issues, they coordinate with each other, notably when attacking nations targeted for regime change.

According to Iranian Nour News, the IRGC's strong air defenses makes "an airstrike on (the facility) almost impossible" to conduct successfully, adding:

"(T)he combination of intelligence, logistics, action and the volume of destruction" at Natanz prove that the incident was deliberate.

Hostile US and Israeli actions against Iran have nothing to do with deterring threats to their security — everything to do with their longstanding war on the country by other means.

For the US, it's all about gaining another vassal state, including control over Iran's huge oil and gas resources.

For Israel, it's part of its regional imperial project, wanting Arab states and Iran balkanized for easier control.

In the case of the Islamic Republic, it aims to neutralize the Zionist regime's main regional rival.

Iran vowed to retaliate in its own way at a time of its choosing to hostile attacks on its facilities.

Striking back appropriately won't deter further US and Israeli hostile acts, but it'll give the pause to know there's a price to pay that hurts.

Turmoil at Home, Turmoil Abroad: Israel and the U.S. Escalate Their War Against Iran