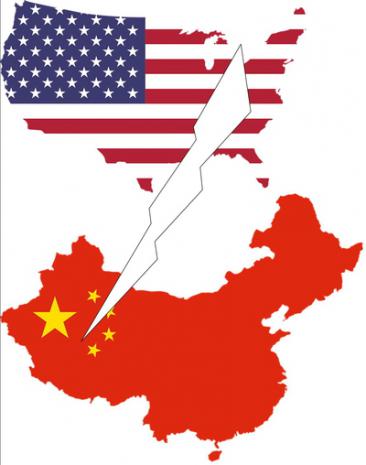 China seeks cooperative relations with other countries, at war with none, threatening none except in self-defense of attacked — the legal UN Charter right of all nations.

Geopolitics of both right wings of the US war party is polar opposite what just societies cherish — seeking dominance over other nations by brute force if other tactics to achieve its aims fail.

Mutual cooperation and respect for the sovereign rights of other nations according to international law is a nonstarter for the US.

It's why a permanent state of war by hot and other means exists between its ruling authorities and all other nations it doesn't control.

Highly distracted by bread and circuses, along with establishment media propaganda, most Americans are none the wiser about how their government breaches the rule of law, harming their health, welfare, safety and security.

US manufactured irreconcilable differences define its relations with China and other nations on its target list for regime change.

With China, they have nothing to do with trade, everything to do with Beijing's growing prominence on the world stage — an intolerable reality that conflicts with US hegemonic aims.

Both nations are rivals, not partners. The further China rises, the greater the possibility of an East/West clash of civilizations.

While calling for resolution of major bilateral differences to avoid rupturing relations, China's Foreign Minister Wang Yi accused the US of encircling and smearing Beijing, along with unacceptably meddling in its internal affairs.

At the same time, Washington demands Chinese support for its geopolitical agenda, he stressed.

According to former Chinese vice-foreign minister Fu Ying, Beijing should pursue relations with the US with its fundamental interests in mind that include continued internal development and world peace.

They "are the latest in a long string of PRC actions to assert unlawful maritime claims and disadvantage its Southeast Asian neighbors in the South China Sea (sic)."

"We are strongly dissatisfied with it and express our resolute opposition," adding:

"We hope the US side can reflect on its behaviors, stop military provocations in the South China Sea, and stop its groundless accusations against the Chinese side."

In contrast to Pentagon military exercises with warmaking in mind, drills by China's PLA are all about national defense — unrelated to attacking another nation.

Stability in the South China Sea is breached by the hostile presence of US warships — notably given that no nations anywhere threaten America's security, reality throughout the post-WW II period.

On Thursday, Pompeo announced the latest anti-China action by the Trump regime.

Ignoring unacceptably hostile actions by the world's leading human rights abuser at home and abroad USA, he accused China of these abuses against Uyghurs, Kazakhs, and "members of other minority groups in Xinjiang," claiming Beijing is waging war on Islam — a longtime US specialty.

They and family members are prohibited from entering US territory.

Visa bans were also imposed on other Chinese officials and their family members.

The latest Trump regime anti-China shoe to drop is all about US war on the country by other means.

They're all about US efforts to weaken and isolate China internationally, along with aiming to undermine its development as a major economic, industrial, and technological power.

According to Treasury Secretary Mnuchin, "all property and interests in property of the entity and individuals named above, and of any entities that are owned, directly or indirectly, 50 percent or more by them, individually, or with other blocked persons, that are in the United States or in the possession or control of US persons, are blocked and must be reported to OFAC," adding:

"Unless authorized by a general or specific license issued by OFAC or otherwise exempt, OFAC's regulations generally prohibit all transactions by US persons or within (or transiting) the United States that involve any property or interests in property of designated or otherwise blocked persons."

China will likely respond in its own way at an appropriate time to the latest hostile Trump regime action.

Fact: For months, the US orchestrated violence, vandalism, and chaos in the city, part of its war on China by other means, targeting its soft underbelly.

Pompeo: "We've also seen this stain of the century in western China that rivals any that we've seen across the globe (sic)."

Fact: Washington's imperial project is responsible for global human rights abuses on an unparalleled scale from its wars by hot and other means.

Fact: Its ruling authorities time and again accuse victims for US high crimes committed against them.

So-called US support for "preserving (the) unalienable rights" of everyone everywhere is polar opposite how both wings of its war party operate.

Hostile US actions against China, Russia, Iran, and other nations it doesn't control risk greater war and instability than already.

US war on humanity by hot and other means against multiple countries worldwide denies it to countless millions and ordinary Americans at home.

In his latest commentary, the Economic Collapse editor Michael Snyder noted the "unending (economic) nightmare" that's ongoing in the US, explaining:

"Businesses are shutting down at a pace that we have never seen before in American history…(an unprecedented) "retail apocalypse."

For 16 consecutive weeks, since around mid-March, more than a million US workers filed claims for unemployment benefits.

According to Shadowstats economist John Williams, real US unemployment exceeds 31%, not the phony BLS reported 11.1%.

Nearly one-third of working-age Americans have no jobs.

Most individuals with them earn poverty or sub-poverty wages with few or no benefits.

Snyder noted an "unprecedented…tsunami of job losses," far exceeding the worst of times before, including during the Great Depression.

Yet Washington fiddles while the Greatest Depression causes enormous harm to most Americans with no end of the hardest of hard times in prospect.

Congressionally passed and signed into law emergency measures to help unemployed US workers expire in two weeks if not renewed.

Other than for committee work, the House is in recess until July 13, no Senate sessions until July 20.

Well over 100,000 US businesses declared bankruptcy and shut down, including about 110 major firms.

Around half of US restaurants aren't operating. Social distancing limits the number of their patrons.

Most hotels either remain closed or have minimal occupancy levels, an untenable situation if continues much longer.

United Airlines announced it will furlough half its workforce, 36,000 staff being laid off.

Established in 1818, venerable US clothier Brooks Brothers, the nation's oldest, headquartered on Madison Ave., NY, in operation for over two centuries, declared bankruptcy and is seeking a buyer.

What's going on was planned, not natural. The most serious ever economic crisis for ordinary Americans, small businesses, and many others was made in the USA.

The self-styled champion of peace, equity and justice USA is the world's greatest abuser on all counts.