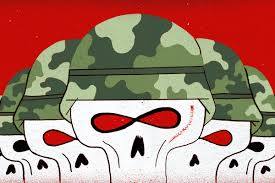 NYT Blames Russia and China for US Inflicted Misery on Syrians

Instead of denouncing US wars of aggression against Syria and other nations threatening no one, the Times (and other establishment media) cheerlead them.

The self-styled newspaper of record also blames victims for US-led high crimes committed against them, along with blaming their allies instead of praising their support.

The Times and other establishment media are hostile to world peace and stability, hostile to sovereign independent nations that are free from exploitive/repressive US control.

During an earlier committee hearing, he said whenever "the president uses (military) force, he has the support of the Congress" — no matter how egregiously the rule of law is breached, he implied in less than so many words.

The Times gave him feature op-ed space to lie, deceive, and otherwise distort reality — a specialty of congressional leaders and their media press agents.

US aggression continues endlessly against Syria and other nations with no prospect for near-term resolution.

Supported by most congressional members and establishment media, Trump's latest strategy in Syria is starving its population into submission.

They want aid entering the country going to ISIS, al-Nusra, and likeminded jihadists alone, not to millions of Syrians in areas they and/or US forces control.

Russian UN envoy Vassily Nebenzia called them "disconnected from the reality on the ground."

It's why both countries vetoed two unacceptable SC resolutions before allowing a less unacceptable one to be adopted — with no assurance that aid through a Turkey/Syrian border crossing checkpoint will reach Syrian civilians in needs.

Most likely, it'll be diverted to or stolen by US supported jihadists, aided by Pentagon troops and CIA operatives.

In his anti-Russia/anti-China/anti-peace/anti-Syria op-ed, Risch reinvented reality in the country, the Times giving him a propaganda platform to its shame.

He used it to falsely accuse Moscow and Beijing of "veto(ing) UN resolutions which would have ensured that lifesaving humanitarian aid could reach millions of suffering Syrians through vital border crossings" — a bald-faced Big Lie.

Most egregiously, he ignored preemptive US war on Syria and its people, flagrantly breaching the UN Charter, other international law, and the US Constitution.

He ignored US support for ISIS and likeminded jihadists. He falsely accused overwhelmingly popular Bashar al-Assad of committing "atrocities."

He lied accusing Russia of "bombing hospitals and civilian centers across Syria" — a Pentagon/NATO/Israeli IDF specialty.

He was silent about the Trump regime's earlier rape and destruction of Mosul, Iraq and Raqqa, Syria, turning both cities to rubble, massacring tens of thousands of civilians.

At the behest of Damascus, Russia began aiding the Syrian Arab Republic and its long-suffering people from US aggression in September 2015.

Its intervention turned the tide of battle, aiding government forces liberate most of the country from control by US-supported jihadists.

Pentagon troops and CIA operatives still occupy northern and southern parts of Syria illegally — their hostile to peace presence ignored by Risch in his propaganda piece.

The US and its imperial allies continue going all-out to prevent humanitarian aid from reaching Syrian civilians — what Russia is in the vanguard of supplying.

Endless US war on them in its 10th year exposed his Big Lie.

The same is true about US war on humanity at home and in multiple theaters abroad.

Instead of being on the side of the angels, the NYT supports Washington's imperial agenda — ignoring its high crimes against peace and overwhelming human cost.