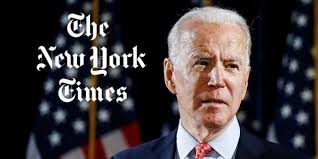 Time and again, the self-styled newspaper of record provides clear proof of its press agent for wealth and power credentials.

It never forgave Trump for defeating media darling Hillary. Bashing him for the wrong reasons continues relentlessly, ignoring the most important right ones.

In a pro-Biden puff piece no responsible editor would touch, the Times discussed day one of a Biden presidency.

Written by notorious establishment defender David Brooks, he assumed a Biden November triumph over Trump in November the way the Times assumed it for Hillary in 2016.

Like most other Times columnists and contributors, his stuff doesn't pass the smell test — polar opposite what good journalism should be, delivering truth and full disclosure at all times, rarely ever by the Times on major issues mattering most.

Ignoring Biden's near-half century of shilling for powerful interests, his support for US wars of aggression throughout his time in office, his deference to Wall Street and other corporate predators over the general welfare, his racist history and US gulag prison system backing, Brooks reinvented an unindicted war criminal multiple times over.

They won't "hang around a guy  they privately hate and who publicly destroyed their majority."

From now to then is a political lifetime. Current polls show Biden with a double-digit lead over Trump, a tough hurdle to overcome.

If Biden wins big in November as things look now, Dems most likely will control both houses, but in politics as in life, nothing is certain.

It's one thing to predict an outcome. Clearly backing Biden and congressional Dems, Brooks did it smugly and omitted what's most important, what I stress repeatedly.

Party label and style aside, Trump and Biden are two sides of the same coin under US one-party governance with two right wings.

Both are anti-peace, anti-equity, anti-justice, anti-rule of law, anti-democratic to the core — the notion considered abhorrent by the US ruling class.

Throughout US history, rule of the people never existed.

The nation has been and today more than ever is a plutocracy — run of, by, and for rich and powerful interests at the expense of the vast majority.

At a time when both right wings of the one-party state vie to see who'll control the executive and legislative branches in January, the Times and other establishment media maintain the ruse of democratic rule that never was and surely is nonexistent today.

The world's richest nation doesn't give a damn about its most disadvantaged people and their foreign counterparts — waging forever wars against them.

Instead of explaining the above, a sure-fire way to be sacked if tried, Brooks reinvented Biden.

He "was nurtured by his working-class family" background…elid(ing) culture war divides (sic)."

"He doesn't act superior to the 'deplorables' because his family taught him to despise status games (sic)."

In "Biden era politics, (things) will shrink back down to normal size (sic)."

What defines US-style "normality" Brooks left unexplained. Anyone aware of the historical record  understands it well — imperial war on humanity by the nation's privileged class against ordinary people and countries unwilling to sacrifice their sovereign rights to US interests.

Ignoring Biden's support for US preemptive wars from Vietnam to the present day, Brooks defied reality, claiming with him in the nation's highest office, "epic wars" will be a thing of the past (sic), adding:

His economic agenda is rooted in "when unions protected workers, when the less affluent had a ladder to climb (sic)."

Ignored by Brooks were years of Biden's support for neoliberal harshness, including punishing austerity — so the US privileged class benefits by exploiting most others.

A Biden presidency assures continuity, dirty business as usual, the same true for everyone both wings of the one-party state choose as standard bearers and to head key congressional committees.

It's the American way, supported by the self-styled newspaper of record, its management, editors, columnists, reporters, and contributors.

Days earlier, Psychology Today asked if he's too old to be president.

Historic figures were quoted on how most people are affected by the ravages of time.

Ancient Greek philosopher Solon believed that people aged 60 - 70 should "make preparations for a not untimely death."

Dante described "senility" from age-70 — the last of what he called four life stages.

Shakespeare's view of aging in As You Like It was most unsparing, saying:

In my 9th decade, I like to explain the latter state as my being no longer able to leap tall buildings with a single bound anymore.

While aging doesn't automatically mean cognitive decline, it's evident in many people late in life.

Whether Biden exhibits borderline dementia I leave for experts to say.

Notably some Dems and media figures backing the party raised the issue earlier.

Time and again, he makes stumbling remarks, creating the impression of losing it mentally — not an encouraging sign for someone with his finger on the nuclear trigger if advances this far.

Physical stamina is another issue. At age-78, age-82 at the end of his fourth year in office if elected in November, can he handle the rigors of long hours and crises when arise?

Can he interface and hold his own with other world leaders?

Many people later in life need help with things that earlier were easy to handle.

"Cognitive abilities wane, and the possibility of dementia rises."

The way to slow physical and cognitive aging is by following a healthy lifestyle that includes nutritious foods, avoiding the junk kind, daily mind and body exercise, getting plenty of rest, and maintaining a calm demeanor when things around us are going to hell in a handbag.

On the other hand, US presidents are figureheads, public and private power brokers running things behind the scenes.

Why not! In real life, elected presidents play the role of head of state, taking direction from others around them.

Truth isn't just stranger than fiction. At times, one resembles the other.

Psychology Today explained the concept of functional age. Some older adults retain their cognitive and physical ability to handle things better than others.

Whether Biden is one of this class I leave for psychologists and gerontologists to judge.

His political record is another matter entirely.

He's been unapologetically supportive of virtually everything just societies abhor — a longtime establishment figure for privilege at the expense of ordinary people at home and abroad.

In November, US voters get to choose between presumptive Dem nominee/old-time establishment pol Biden and brazen billionaire businessman/incumbent president Trump.

Whoever triumphs over the other, continuity is assured.

So is exploiting ordinary people so privileged ones benefit exclusively.

It's the American way, how it's been from inception with rare short-lived moments of governance delivering benefits for ordinary people.

Remaining ones are fast eroding, replaced by neoliberal harshness and growing tyranny — supported by both right wings of the one-party state and establishment media press agents.