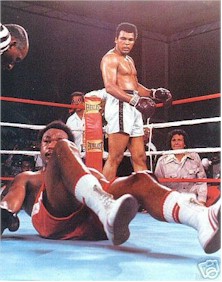 A familiar phrase, barely 30 years old.  Most often, I've heard the phrase used incorrectly to describe a confused or chaotic situation better described by the military phrase involving clusters and fornication.  “Rope-a-Dope”, however, truly describes a risky fighting tactic.  Its origin is rooted in one of the greatest displays of single combat of all time – The Rumble in the Jungle.

Rumble in the Jungle
On October 30, 1974, novice fight promoter Don King made his big-time debut by fielding two fighters in the same ring in Zaire.  In one corner, the expert technical fighter, Muhammad Ali prepared to fight the World Heavyweight Champion, the bruiser George Foreman.  Ali was fighting to regain the heavyweight title, while Foreman was fighting to keep it.

In the first round, Ali got the jump on Foreman with a fine display of technical skills.  Foreman was not fazed by Ali's strength, however, and herded Ali into the ropes where he could unleash his crushing blows.  In the second, Ali let Foreman take the lead, and lounged on the ropes while Foreman threw massive yet ineffectual blows to his elbows and body.

Foreman threw hard through five while Ali alternated between lying on the ropes and on Foreman, forcing Foreman to bear his weight in the clinch.  Ali watched for the rare opportunities to land punches to Foreman's head and taunted Foreman to throw the hard punches he was famed for.  By the end of the fifth round, Foreman was visibly fatigued from throwing hard punches; he staggered, almost out of the ring, while his face turned puffy from the few good punches Ali got to his head.

By the eighth round, Foreman's punches no longer had any power.
http://www.youtube.com/watch?v=10ZIxV9KWgY
Rope-a-Dope
The mele following the fight included accusations that Zach Clayton, the referee, miscounted (a problem Foreman later attributed to his corner), and later an accusation from Foreman that he had been drugged.  Ali used that accusation in an interview with Howard Cosell to coin the phrase “rope-a-dope”.

Rope-a-dope is a risky tactic.  Most fighters lacking the technical skills of Ali have been hurt badly attempting to use it.  It requires both the technical ability to block or deflect hard punches as well as the physical stamina to withstand the punches that are not deflected.  A tough pugilist, however, faces an extremely weakened opponent at the end of the fight.

Current Usage
As all combat tactics and techniques, rope-a-dope has seen use in business and politics with the same risk and requirements of technical skills.  Of note, Texas Congressman Ron Paul, a fan of Ali, has reputedly utilized the rope-a-dope in several of his eleven election campaigns.