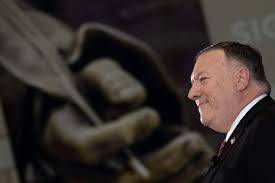 Judge him by his actions and rhetoric, defining the menace he represents.

Time and again, he shows that he's mentally unbalanced, recklessly dangerous, arrogant and contemptuous of the rule of law.

He's also able to manipulate geopolitical know-nothing Trump to go along with policies no responsible leader and government would tolerate.

Along with majority congressional hardliners in both wings of the US war party, he's going all-out to sabotage decades of Sino/US relations.

Worst of all and most dangerous, he's escalating hostile US actions against China that risks pushing the envelope toward direct confrontation.

He virtually called for toppling its government, urging an end to decades of bilateral relations by "triumph(ing) over (its) tyranny (sic)" — falsely accusing its ruling authorities of threatening the US and its people, a bald-faced Big Lie.

Like Trump, Pompeo is an abhorrent figure, a serial liar, an official with no credibility, a street thug masquerading as chief US diplomat.

Haass currently serves as Council on Foreign Relations president, a group historian Arthur Schlesinger, Jr. once called an organization that "front(s) (for) the heart of the American establishment."

He also warned about extrajudicial US actions that exceed constitutional limits.

"Worse was his misrepresentation of history and his failure to suggest a coherent or viable path forward for managing a relationship that more than any other will define this era."

He also "failed to note (that Beijing) has not fought a war with another country" for decades.

Haass is no peacenik, far from it. He ducked the issue of US forever wars and policies he earlier urged.

In his book titled "The Reluctant Sheriff," he argued that the US should assume this role internationally in "forg(ing) coalitions…for specific tasks" – serving its own interests, adding:

His later book titled "Imperial America" argued that US leaders should pursue "an imperial foreign policy…organiz(ing) the world along certain principles, affecting relations between states and conditions within them" – operating like "19th century Great Britain" to exert international control over other nations.

Separately, he argued that the US should have intervened more forcefully to topple Syria's Bashar al-Assad.

He left unexplained that preemptive attacks by one nation on others are the highest of high crimes against peace.

His concern about China is its ability to retaliate strongly to aggression if attacked, including with nuclear weapons if these WMDs are used against it.

"His outrageously deranged words have been criticized and condemned by all people who love peace and have a sense of justice, including those in the United States."

His "accusation of 'CPC designs for hegemony' is out of not only ignorant but biased."

Urging "an anti-China coalition" in his address last week was a call to arms, a recklessly dangerous act by Pompeo — a figure abhorrent of peace, fundamental freedoms, and other democratic values he and likeminded US hardliners tolerate nowhere, especially not domestically.

China's ruling party that began with a few dozen members now has a membership of over 91 million.

Its ruling authorities pursue the nation's development in peace.

Unlike the US and its imperial allies, waging forever wars on invented enemies, China threatens no other countries, working cooperatively with the world community of nations.

Wang stressed that "long gone are the days of ideological confrontation."

"We would like to develop China-US relations featuring coordination, cooperation and stability, but we reject any bullying and injustice."

"The Chinese people are not weak-kneed, and the world is not easily deceived."

"We urge a few US politicians to stop slandering the CPC and the Chinese people and undercutting China-US exchange and cooperation."

"We call on all peace-loving countries and people to step forward and say no to the insanity of Pompeo and (others in the US) like (him who) jeopardize world peace."