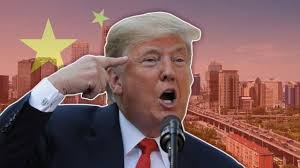 Saying the "trip represents an opportunity to strengthen our economic and public health cooperation with Taiwan, especially as the United States and other countries work to strengthen and diversify our sources for crucial medical products" is phony cover for the visit's real purpose.

It's part of US war on China by other means, going all-out to undermine its growing prominence on the world stage.

Beijing considers Taiwan its sovereign territory, treating it as a breakaway province to be eventually reunited with the mainland.

Decades ago, China's Deng Xiaoping said "(o)ne country, two systems" became official Beijing policy, part of its plan for eventual reunification of Taiwan with the mainland, the island state to be treated like Hong Kong and Macau, retaining their own administrative systems.

The issue was discussed with Richard Nixon during his 1972 visit to Beijing.

When formal Sino/US relations were established in January 1979, official US recognition of Taiwan ended.

The 1992 Consensus one China principle affirms US recognition of one China comprised of the mainland and Taiwan — an issue Beijing considers non-negotiable.

Trump unilaterally changed longstanding US policy, earlier saying "(e)verything (with China) is under negotiation, including one China.

Its Foreign Ministry responded strongly, demanding the Trump regime recognize "the high sensitivity of the Taiwan issue and abide by commitments made by previous US governments to the one China policy."

Azar's visit to Taiwan will be the highest-level one by a US official since 1979.

In 2014, Obama's EPA administrator Gina McCarthy visited the island state. So did the Clinton co-presidency's transportation secretary in 2000.

Azar is considered senior to them in the US presidential line of succession.

In response to the announced trip "in the coming days," China accused the Trump regime of "endangering peace," adding:

"China firmly opposes official exchanges between the US and Taiwan."

Beijing considers them the equivalent of a foreign nation visiting a US state without authorization from Washington.

It's the latest is an endless series of provocative US actions against the country.

Enactment of the US Taiwan Travel Act (2018) encourages high-level visits by foreign delegations.

"If the US ignores China's warning and firm stance on its sovereignty over the island, a war in the region would be inevitable," according to unnamed analysts.

On Wednesday, China's Foreign Ministry spokesman Wang Wenbin lodged "solemn representations" with the Trump regime over the announced visit, calling for it to be reversed, adding:

The US should "stop all official exchanges with Taiwan…and avoid undermining China-US relations and the stability of the Taiwan Straits."

His unacceptable actions poisoned bilateral relations beyond repair as long as he remains in office.

If Biden succeeds him in January, what's most likely based on current polls and economic collapse that's always a huge negative for incumbents, things won't likely improve much if at all.

"A conflict over Taiwan could escalate into an all-out war that could be devastating to all mankind."

"We must develop an understanding between Chinese and American leaders to avoid this great danger."

While war between two nuclear super-powers with important economic ties is unthinkable, US rage for dominating other nations makes it possible.

Terrifying moment three-year-old girl is whisked 100 feet into the air by giant kite during...