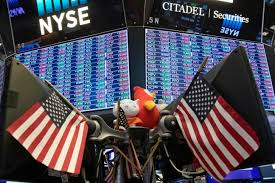 Trump Regime to Delist Chinese Firms from US Stock Exchanges?

On Thursday, the Wall Street Journal reported that the Trump regime intends to delist Chinese firms trading on US stock exchanges that don't "comply with US audit requirements," adding:

Unanimously passed Holding Foreign Companies Accountable Act Senate legislation adopted in May gave "Chinese companies that don't comply three years to delist in the US and find a new exchange."

Initially introduced in December 2018, it wasn't voted on by either house.

Wuhan University's Finance and Securities Institute director Dong Dengxin said it's highly likely that the measure will be signed into law by Trump if it reaches his desk before expiration of his term, adding:

His regime aims "to squeeze Chinese companies out of the US market. It is sabotaging its self-claimed free market, and is irresponsible to the investors."

China prohibits PCAOB from inspecting records of auditing firms in the country.

The White House intends delisting Chinese companies that don't comply with US demands by January 1, 2022.

According to an unnamed SEC official, if Chinese firms comply, "there would be very little impact. (Otherwise) you'd have a fairly significant impact."

SCMP reported that "the US investment community has pushed back since the Senate passage, calling the approach 'blunt' and saying such law should be " 'reserved as the last resort.' "

In July, the New York Stock Exchange (NYSE) expressed support for another way to evaluate foreign listed firms not subject to SEC inspection.

Congressional intervention "should be a last resort."

SCMP said "(s)ome large US investors have defended Chinese companies…saying they have a place in American capital markets."

Following passage of Senate legislation in May, the China Securities Regulatory Commission (CSRC) said the measure is targeting Beijing, adding:

It "jeopardiz(es) the interest of both sides. It is deterring foreign companies from being listed in the US and is weakening international investors' confidence in the US capital market."

According to the US-China Economic and Security Review Commission, 156 Chinese firms were listed on US exchanges last year.

As part of Trump regime war on China by other means, the Federal Retirement Thrift Investment Board that manages around $600 billion in US workers' pension funds said it halted new investments in Chinese firms because of White House pressure.

The Trump regime and congressional threat to delist Chinese firms that don't comply with US demands has nothing to do with protecting investors, as Treasury Secretary Mnuchin falsely claimed.

It has everything to do with China bashing, waging US war on the country by other means.

The Wall Street Journal reported that House members passed similar legislation to the Senate's measure "as an amendment to a defense-spending bill."

Hong Kong's secretary of justice and security, its current and former police chief, along with various mainland officials were also targeted, 11 individuals in total.

An unnamed Beijing official denounced the hostile action, saying "we are furious about this, and despise such tricks."

"The foreign ministry would definitely hit back, it has made it clear in the past that they would hit back in face of unreasonable acts."

If Trump is reelected in November, perhaps that's where things are heading or something worse.