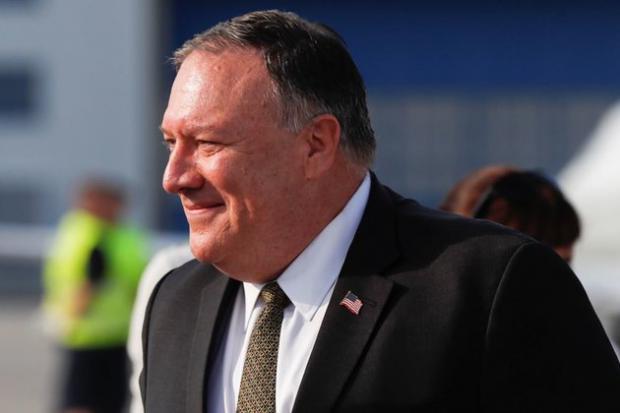 His modus operandi is "lying, cheating and stealing."

"Traditional pirates (rob) ships…Pompeo…pursue(s) his (self-serving agenda) by abusing the office" he holds.

He uses it as a platform for higher office, operating as a Trump regime "hatchet man…bullying countries" worldwide.

He's Trump's point man for waging war on China by other means, a reckless agenda, risking a rupture in bilateral relations or something worse.

Addressing parliamentarians in Prague on Wednesday, he discussed what he called "securing freedom in the heart of Europe (sic)" — a notion he and likeminded US hardliners tolerate nowhere, especially not domestically.

His address focused on bashing Russia and China with his customary litany of bald-faced Big Lies.

He falsely accused Moscow of "seek(ing) to undermine your democracy (sic), your security through disinformation campaigns and through cyberattacks (sic)."

He lied claiming Russia is "trying to rewrite your history (sic)."

He falsely accused China of posing "an even greater threat (by) campaigns of coercion and control (sic)."

He repeated the long ago debunked claim about COVID-19's origination in Wuhan.

The made-in-the-US bioweapon was exported to China and elsewhere worldwide, including in America from sea to shinning sea with diabolical objectives in mind explained in previous articles.

Ignoring months of US orchestrated violence, vandalism, and chaos in Hong Kong, he falsely blamed Beijing for causing what happened.

He lied about alleged mistreatment of Uyghur Muslims, another US manufactured myth.

He lies so repeatedly and egregiously that he likely no longer can distinguish between truth and state-sponsored propaganda.

The "way of life" he favors is unchallenged US global dominance, controlling other nations, plundering their resources, entrapping their people in serfdom — all of the above enforced by militarized control, the Pentagon operating as a global sheriff.

Pompeo and likeminded US extremists fool some people always, others some times, growing numbers opposed to Washington's imperial scourge.

As long as its global menace is unchecked, world peace, stability, equity and justice will remain unattainable.

On Tuesday, Trump claimed if Biden wins in November, Americans "are going to have to learn to speak Chinese (sic)."

Both US wings of the one-party state are hostile toward China and other nations Washington doesn't control.

US war on humanity at home and abroad rages under Republicans and Dems the same way.

In his book titled "Perpetual War for Perpetual Peace," Gore Vidal slammed US chicken-hawk "jingoes (who) favor (endless) war(s) for other Americans to fight," adding:

US "criminal acts…fuel (global) hatred…(H)ow (did things) arrive at this pass?"

"It needs, even more, to foresee disasters that might lie in the future" that otherwise may be inevitable with catastrophic consequences.