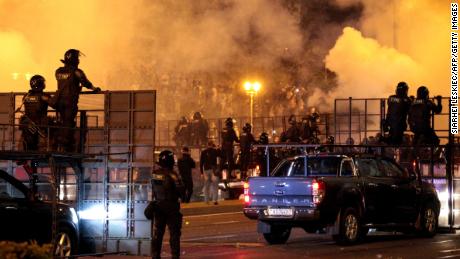 "We are closely following the developments in Belarus over the past few days."

"We are concerned about the incoming reports on incidents that involve violations of public order on the streets of a number of Belarusian cities that followed the presidential election."

The Trump regime and its imperial partners are involved in "splitting society and destabilizing the country."

"We have repeatedly seen the use of similar methods in other countries."

Lukashenko vowed that they'll be no (US orchestrated Ukrainian-style) Maidan coup in Minsk to replace him with pro-Western puppet rule.

US dark forces relish a chance for control of another nation bordering Russia.

Dozens of Russian citizens, including journalists, were seized in the Belarusian capital.

Reportedly all but one individual was released.

While most people protesting against elections results they consider rigged were peaceful, US recruited hooligans instigated violence.

What's gone on is reminiscent of what happened in Kiev from late 2013 to the ouster of President Viktor Yanukovych in mid-February 2014.

Whether things end in similar or different fashion in Minsk is yet to unfold.

Russia is involved to try preventing the US from gaining control over Belarus.

"We are confident that any attempts to trigger discord (between both countries) are doomed to failure."

Through his spokesman, UN secretary general Guterres failed to denounce unacceptable US manipulated violence in Minsk.

Instead, he issued his customary weak-kneed statement through his spokesman, calling for "Belarusians to address post-election grievances through dialogue to preserve peace in the country."

Commenting on US orchestrated aggression in Syria, MZ noted continued violence and instability in areas controlled by US supported terrorists.

These elements still control most of Idlib province — heavily armed, trained, funded and directed by the Pentagon and CIA operatives.

MZ: "Terrorists have stepped up the shelling of government troops and nearby towns and villages and continue their provocations in the 'security corridor' along the M4 motorway."

Joint (Russian/Turkish) patrols of the motorway have been suspended."

"Also, attempts to attack the Khmeimim Russian air base are of special concern."

"Another attack involving three drones is reported to have been repelled on August 10."

"It is clear that firm stability in the Idlid de-escalation zone can only be achieved after the terrorist hotbed there has been neutralized."

There's been increased US supported ISIS attacks in the area.

"The local population is angry over illegal extraction and smuggling of Syrian oil with support from the US."

"This is not only the deliberate plundering of the country's natural resources."

Endless war continues because bipartisan US dark forces reject restoration of peace and stability to the country.

The same goes for Israel. Terror-bombing Syrian targets at its discretion, the Netanyahu regime is heavily involved in trying to destroy its sovereignty — partnering in US war on the country.

With inflation exceeding 80% since last fall, widespread unemployment and poverty, much of Beirut in ruins, and a population ill-served by the nation's ruling class, the Lebanese people clearly want sweeping change.

A Lebanese journalist I made contact with emailed me the following:

"We simply want to live in peace, and we surely don't accept anyone to treat or be treated in a brutal way."

"Throughout history, the Lebanese people proved to be humanitarian with all nations."

"We always try to support oppressed individuals, and above all we frequently find ways to adapt in other societies and succeed in our careers."

"It's in our blood. If people of the whole world want to achieve freedom and justice on earth, they have to stand by the Lebanese" people in their time of overwhelming need.

MZ called for Lebanese politicians "to unite in order to overcome the aftermath of the disaster that took place in the port of Beirut."

"They have to take joint steps in order to de-escalate tensions, renounce violence and prevent a further descent into chaos and to a point of no return."

The US, Israel, France, and other nations aim to exploit the situation, "politicizing…financial aid" to serve their diabolical geopolitical aims.

Restoring normality to Beirut will take years. Meanwhile, the Lebanese people are enduring the hardest of hard times, Beirut resembling a war zone.

Resignation of the government is meaningless if elements replacing it continue what most Lebanese reject.

Corruption is deep-seated. The nation's ruling class has long been indifferent to the rights and needs of the Lebanese people.

Cost of damage in Beirut is estimated at between $10 - $15 billion.

Hundreds of thousands of city residents affected by the blast need food, shelter, medical care for the injured, and help in restoring their shattered lives.

On Thursday, parliament approved a state of emergency.

It makes an untenable situation worse by empowering the military to control things extrajudicially.

MZ said Moscow is "doing everything (it) can" to help the Lebanese people in "a friendly nation, including actively participating in the large-scale search-and-rescue operation in the port of Beirut and having the Russian Emergencies Ministry mobile field hospital doctors provide emergency medical assistance to the injured."