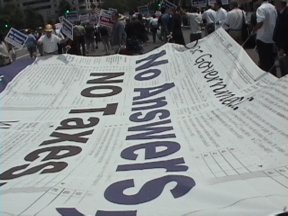 On January 4, 2008, the Judges of the Supreme Court of the United States, in conference, voted to deny the Petition for Writ of Certiorari in the landmark Right-to-Petition case We The People v. United States. On January 7 the Court issued its Order denying certiorari.

Without comment, the Supreme Court decided not to hear We The People v. United States, a case which, if heard, would have required the Court to declare -- for the first time history -- whether the Government is obligated to respond to proper Petitions by ordinary, private individuals for Redress of Grievances – specifically Grievances alleging unconstitutional behavior by the Government, and whether the individual having so Petitioned, has the Right to act to peacefully hold the Government accountable if the Government refuses to respond.

In denying to hear this first impression case, the Court has ignored its duty to interpret the meaning of the Constitution, and leaves undisturbed the decision of the DC Court of Appeals which, unfortunately, relied on two cases not on point involving employment related grievances by state public employees and state legislation governing same, not Grievances by private parties, and not involving alleged violations of the Constitution.

The decision by the Supreme Court has grave consequences for the future of individual Rights, Freedom and Liberty, popular sovereignty, government accountability and the great experiment in (self) government that is America. Any Right that is not enforceable is not a Right.
Click here to access the full article:
http://www.wethepeoplefoundation.org/UPDATE/Update2008-01-13.htm

Texas, Abortion and the Constitution