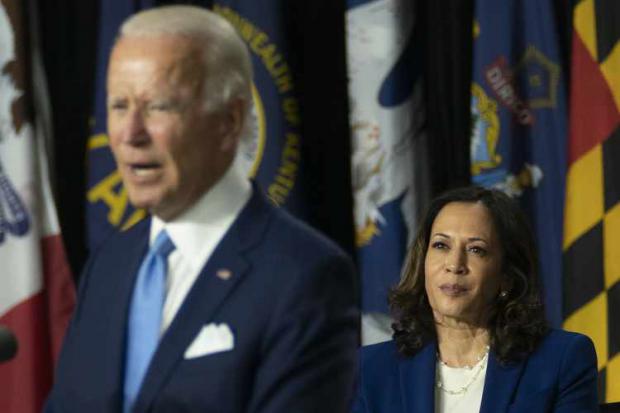 In 2016, the Times was a virtual Hillary press agent.

Hostile to Trump straightaway and throughout the campaign with nothing political about him to criticize at the time, it promoted her agenda that threatens world peace, supporting monied interests over popular ones, and tyranny masquerading as democracy.

The good news is she won't be a three-time Dem party presidential nominee in 2020, hopefully never again, her unpopularity likely sealing her fate.

The bad news is that Dems presumably will officially choose Biden and running mate Kamala Harris next week.

The US political season never ends. It'll be in high gear post-conventions this month.

According to the Center for Responsive Politics, US 2020 presidential aspirants, groups working on their behalf, "leadership PACs, super PACs, dark money outlets," and other sources raised over $2.7 billion so far.

As an incumbent, Trump amassed a sizable war chest before Biden entered the race.

Politicians in America are bought like toothpaste. Big money controls the process in cahoots with party bosses.

Voters have no say over over who runs things or their agendas.

Democracy in America is pure illusion, never the real thing from inception to now.

Longtime critic of US politics when alive and active, Gore Vidal once said the following:

"I do not think that the American System in its present state of decadence is worth preserving."

"There is only one party in the United States, the Property Party" — each wing similar to the other.

America's "democracy" in name only is a system "where numerous elections are held at great cost without issues and with interchangeable candidates" no different from each other.

"By the time (aspirants) get to be presidential material, (they've) been bought ten times over."

America is "rotting away at a funereal pace. We'll have a military dictatorship pretty soon…"

Candidates for president and key congressional posts are largely cardboard cutouts of each other on issues mattering most, differing only by party label and style.

The NYT is going all-out editorially to make Trump a one-term president.

Along with cheerleading Biden's campaign, it applauded his choice of Harris.

Ignoring her near-perfect record of voting along party lines — see below — she's "the future," the Times roared — "a VP that big business can back," adding:

Her gender, race and cultural roots are non-issues. Her choice as Biden's running mate is all about her support for Dem party politics across the board.

Longstanding con man Bernie Sanders abandoned his supporters by endorsing Hillary in 2016 and Biden this year.

After Harris was chosen as his running mate, Sanders tweeted that she'll "make history as our next vice president (sic)."

He ignored a ticket only militarists, weapons makers, big money, and elements hostile to equity and justice could love.

Appearing together for the first time on Wednesday, both Dem aspirants recited typical mumbo jumbo rubbish in kicking off their campaign.

Calling Trump the problem, they'll correct in office, they claimed, it was a Big Lie establishment media failed to expose.

Here's more in support of Harris from the Times:

Her "selection…is both historic and inspiring (sic)."

There's nothing "inspiring" about the dirty business as usual agenda she supports that's responsible for endless wars on humanity by hot and other means at home and abroad.

She "comes with the benefit of being tough as nails, a true fighter, and one who has already been tested in this cycle on the trail (sic)."

There's nothing justifiable about mean-spiritedness, about being a police state enforcer, about getting people imprisoned over nothing, about supporting big money over equity, justice and the rule of law.

She "brings to the table…the enthusiasm she generates."

The above sounds like a TV commercial that's selling stuff no one should buy.

She co-sponsored the Uyghur Human Rights Policy Act of 2020 that's all about China-bashing, unrelated to human rights.

She supported the USA FREEDOM Reauthorization of 2020 — the police state USA Patriot Act in new form that includes Big Brother spying on Americans.

As California AG, she said "(i)t's not progressive to be soft on crime."

Countless individuals she prosecuted, got convicted and imprisoned committed misdemeanors too minor to matter — like smoking marijuana, she admitted using herself earlier.

According to Roll Call, her "legislative record…shows a loyal (Dem) and Trump counterpuncher," adding:

Among other reasons, she was picked as Biden's running mate for being safe, including as president if makes it that far.

With 21 other Dems, she opposed what she called a "precipitous withdrawal" of US forces from Syria and Afghanistan — nations threatening no one the US attacked aggressively and continue a policy of permanent (illegal) occupation.

She was one of eight Dems to vote against the US, Mexico, Canada trade agreement to replace NAFTA.

While rhetorically expressing support for Medicare for all, she only backed a choice between a consumer public option or private insurance coverage.

Her position on healthcare is much like Obama's who time and again said:

Instead they got the so-called Affordable Care Act, a healthcare rationing scheme to enrich insurers, drug companies and large hospital chains.

Obama initially supported a public option, then dropped the idea to please Big Pharma and other healthcare industry interess

In February 2010, WaPo columnist Ezra Klein slammed what he called "(a) failure of (Obama) White House leadership on this issue — pledging one thing, then going another way.

Steps toward universal healthcare are opposed by most House and Senate members.

Roll Call said Harris "went back and forth" on this issue, showing that if it came up for a vote and hers mattered, she'd oppose what she rhetorically backed.

She supported Sanders' S. 1129 single-payer 10-year transition to Medicare for all — a lengthy period that assures it will never become the law of the land.

On communications, technology, and social media issues, she declined to endorse anti-trust actions against monopolistic practices of industry giants.

On law and order issues, she's hardline, opposing calls to to hold police accountable, saying supporters of this policy are "shameful."

Harris is a loyal Dem foot soldier now elevated in their ranks as Biden's running mate.

If elected, she'll be vice president in January, a heartbeat from the nation's highest office with a chance for the brass ring in a future election or sooner —  if Biden defeats Trump and is unable to complete his term.