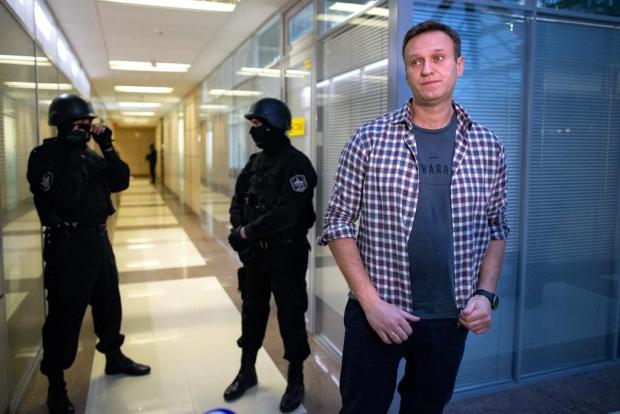 According to Sputnik News correspondent Evgeny Mikhaylov, he "earlier announced that he would close his (dubious) Anti-Corruption Foundation (FBK) after a series of scandals around its activities and a criminal probe into the suspected laundering of around 1 billion roubles ($15.3 million), obtained by the foundation via criminal means."

On Thursday aboard a flight from Tomsk to Moscow, he became ill, was taken to an Omsk hospital unconscious where he was placed in a medically induced coma.

According to his spokeswoman Kira Yarmysh, he's in serious condition after only having had a cup of tea before boarding his flight.

Screaming anti-Russia headlines suggested he was poisoned despite no evidence suggesting it. More on this below.

On Friday, Omsk hospital deputy chief medical officer Anatoly Kalinichenko said the following in response to his family's request for him to be flown to Germany for treatment:

"We do not object against his transfer to another hospital. It will not happen instantly. It will happen today."

"This process will be preceded by a number of medical actions" to assure he's stable so his condition isn't worsened by aerial transfer.

"A number of legal formalities must also be complied with."

Initially he was too unstable for transfer to Germany.

"Air transfer is (now) possible under the responsibility of his relatives and the German reanimatologists" who came to Omsk to examine him.

Doctors at Omsk believe his illness may have been caused by a sharp drop in blood sugar during flight, causing him to lose consciousness.

On Friday, Dr. Murakhovsky said "(t)oday we have worked out diagnoses."

"The main one, which we are inclined to favor, is a disorder in the carbohydrate balance, that is, a metabolic disorder."

No traces of poisons were found in his blood or urine.

Overnight Friday, Navalny was flown to Berlin's Charite Hospital for treatment, arriving at around 8:30AM GMT, the hospital tweeting:

Admitted for treatment, "a thorough medical examination is being carried out."

"Upon completion of research and discussion with the family, the attending physicians will make a public statement about the disease and further steps for treatment."

Navalny is a political nobody who's largely ignored or disliked by most Russian nationals.

In US criminal trials, means, motive, and opportunity must be proved beyond a reasonable doubt to indicate guilt.

Moscow had no reason to want Navalny killed. No evidence suggests a motive. He's a minor irritant of no consequence with scant public support.

Establishment media invent reasons to bash Russia and other nations on the US target list for regime change.

According to NYT propaganda, "it appeared that Mr. Navalny had been slipped a strong poison (sic)."

His personal physician Anastasia Vasilyeva was cited by the Times, saying — without evidence — that Russian authorities delayed his departure to Germany for poison in his system to be hard or impossible to detect, even though none was detected by Omsk doctors.

The CIA connected Washington Post played up "suspected poisoning" that seems highly unlikely based on the diagnosis of his illness.

Who'd want him poisoned? No evidence suggests Kremlin responsibility for his illness.

Other screaming headlines included the following:

USA Today: "Critic of Russian government may have been poisoned. It's the latest claim of treachery against Russia"

"The Russian government critic is in a coma after suspected poisoning."

What the Qatar controlled operation called the "inside story" about Navalny was riddled with disinformation and fake news like most of its other state-approved propaganda.

Why the fuss over political nobody Navalny who'll likely recover from whatever caused his illness?

When no legitimate reasons exist, phony ones are featured time and again in support of US interests over truth and full disclosure that's suppressed.

Note: In mid-2019, Navalny was arrested for involvement in a violent anti-government protest.

In custody, he had an allergic skin reaction, was hospitalized, stabilized, and returned to his cell.

At the time, he falsely claimed Russian authorities poisoned him.

According to an analysis by Russia's Sklifosovsky Toxicology Institute, "poisoning substances were not found."

Nor does any evidence suggest his current illness was caused by poisoning or other foul play.