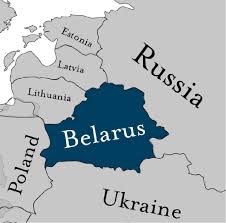 Belarus is a small nation of about 9.5 million people, bordering Russia and US vassal states Ukraine, Poland, Latvia and Lithuania.

Most Americans never heard of the country until screaming establishment media headlines followed its August 9 presidential election — won by incumbent Alexander Lukashenko by less than the official 80% majority.

Political nobody challenger Sviatlana Tsikhanouskaya became an overnight media darling because of US support.

US dark forces long ago targeted the Belarus for regime change, part of their strategy to surround Russia with Pentagon-led NATO forces.

Establishment media serve wealth and power interests at the expense of journalism the way it's supposed to be — what they long ago abandoned in favor of press agent support for their diabolical agenda.

Without their backing to manipulate the public mind, preemptive US wars, color revolutions, old-fashioned coups, and other hostile actions wouldn't get out of the starting gate.

Throughout most of August, establishment media featured endless propaganda reports on Belarus in the aftermath of its August 9 presidential election, a nation they largely ignored before.

The self-styled newspaper of record NYT never met a world leader not subservient to US hegemonic interests it didn't go all-out to demonize.

Its latest on Sunday Minsk  demonstrations ripped Lukashenko, pretended neighboring fascist US vassal states are democratic, and ignored manipulation of what's going on in the Belarus by US dark forces — supporting their attempted color revolution instead of exposing and denouncing it.

The only "disputed" thing about Lukashenko's August 9 reelection is his margin of victory — not according to the Times and other establishment media, pretending Tsikhanouskaya won the election she lost.

Thousands in "central Minsk…on Sunday (was less) a powerful show of defiance" against Lukashenko, largely another example of US orchestrated opposition against a leader free from its control who's targeted for regime change.

Claiming protests against him "knitted together a vast cross-section of Belarusian society" is unsupported by evidence the broadsheet failed to present because it doesn't exist.

Opposition is centered in Minsk, reminiscent of Obama regime-staged 2013-14 coup d'etat events in neighboring Ukraine — without US orchestrated shootings so far.

Since begun over two weeks ago, what's going on disruptively in Belarus has US dirty hands all over them that's all about wanting Belarus transformed into a client state.

Events in the country are unrelated to what James Petras called "(t)he lies of our (Financial) Times," a broadsheet that "transform(ed) (itself) from a relatively objective purveyor of world news into a propagator of wars and failed economic policies."

The FT falsely claimed that events in Belarus are "part of a global protest trend (sic)."

Citing Hong Kong as a key example, the FT ignored Trump regime war on China by staging violence, vandalism and chaos in its soft underbelly, a scheme to destabilize the mainland.

Claiming "(w)e are reliving 1968, but bigger" is polar opposite cold hard reality the FT suppressed in deference to US-led imperial aims to transform all sovereign independent countries into vassal states, their resources plundered, their people exploited as serfs.

WaPo also ignored reality by falsely claiming what's going on in Belarus is "not…akin to the pro-Western 'color revolutions (sic)'…not a redux of Ukraine in 2014 (sic)."

Since first orchestrated by the Clintons to topple Serbia's Slobodan Milosevic in 2000, US regimes from Bush/Cheney to Obama/Biden to Trump/Pence staged numerous color revolutions, some succeeding, others failing, Belarus the latest diabolical US scheme to topple a sitting government.

Turning reality on its head, the Wall Street Journal falsely called events in Belarus are a "democratic uprising (sic)."

The so-called Sunday "March for a New Belarus" is all about wanting control over the country by US dark forces for use as another dagger aimed at Russia's heartland.

Establishment media support the world's most ruthless despots as long as they're subservient to US interests.

They oppose democratic Venezuela, Nicaragua, and other nations because they're unwilling to subordinate their sovereign rights to Washington's hegemonic demands.

That's what their opposition to Lukashenko is all about, unrelated to how he's governed since first elected in 1994.

Unwilling to be anyone's puppet is why the Trump regime wants him toppled.