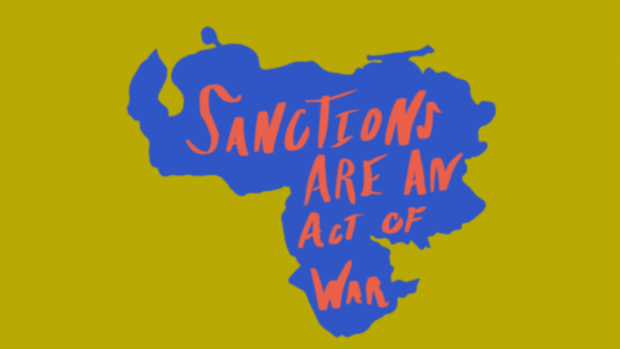 US Sanctions: Weapons of War by Other Means

Hegemon USA operates extrajudicially on the world stage in pursuit of its aims at the expense of world peace, stability, and sovereign rights of other nations.

It's the world's leading human rights abuser at home and abroad, both right wings of its one-party state operating the same way on issues mattering most.

Time and again, they falsely accuse nations on their target list for regime change of their own high crimes of war, against humanity, and other hostile actions.

Since the fall of the Berlin Wall and Soviet Russia's dissolution at the end of the 1980s, Cold War politics never ended.

Post-9/11, they've been back with a vengeance against all nations unwilling to subordinate their sovereign rights to US interests — what the scourge of imperialism is all about.

China's emergence as an economic, industrial, technological, and military powerhouse made it US public enemy No. One — despite no threat posed by the country.

Its ruling authorities support world peace, stability, and mutual cooperation with other nations, at war on none, threatening none — in contrast to US war on humanity at home and abroad by hot and other means.

Unlawfully imposed sanctions on targeted nations, entities and individuals are key US weapons of war by other means — China a prime target.

Along with blacklisting its key enterprises, US policy is all about aiming to marginalize, weaken and undermine the country's economic, industrial, and technological growth.

On July 31, the Trump regime imposed unlawful sanctions on on China's Xinjiang Production and Construction Corps (XPCC) and two of its officials — based on phony claims about alleged links to human rights abuses, citing no evidence proving the claim.

The US Treasury Department's  Office of Foreign Assets Control (OFAC) said the following:

Sanctions were imposed on "XPCC, Sun Jinlong, a former Political Commissar of the XPCC, and Peng Jiarui, the Deputy Party Secretary and Commander of the XPCC."

On Monday, the South China Morning Post (SCMP) called US sanctions on XPCC and its officials possibly "the biggest case in the history of the (US Treasury's) Office of Foreign Assets Control," adding:

Sanctions on the company and its officials risk "choking off (its) bank loans to curbing its farm exports (and jeopardizing) its investments."

The company is involved in many industries, including construction, infrastructure and property development, as well as farming.

Reportedly, it's involved with thousands of companies and other entities in 147 nations.

China expert Thomas Cliff calls the company a "state within a state" — founded by Mao Zedong in 1954 to develop the country economically, by building cities and towns, along with establishing and operating farms.

According to government data, it employs over three million people, "has 14 divisions and over 179 regiments…"

China scholar Bao Yajun calls XPCC a secretive organization with a military structure that reports to "Xinjiang Uygur autonomous region's government and the central authority in Beijing," according to the SCMP.

So far, the company hasn't publicly commented on US sanctions."

They deny the firm access to US technology and other products.

Political analyst Shih Chienyu said US sanctions on XPCC could greatly impact its international operations, forcing the firm to focus on operating domestically.

At the same time, he added the following:

"I think Beijing may still be considering the sanctions and other hawkish gestures as a (US) political move and not an economic one."

"It is not about turning off the tap to make you die of thirst yet."

"That's the US attitude towards Iran, but I don't think this is America's goal for China."

Over the weekend, China's Global Times called US sanctions counterproductive, "repeating few benefits while turning its allies against it" — citing Trump regime anti-Iran actions related to the JCPOA as an example.

The same holds for other countries targeted by US sanctions war, including Russia, Cuba, Venezuela, Nicaragua and North Korea.

Though their economies and people were harmed by US actions, they failed to dent the resiliency of these nations to remain free and independent of its control.