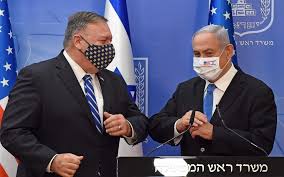 Pompeo in Israel on Regional Tour

Pompeo is meeting with leaders of four hardline regional regimes — Israel, Sudan, Bahrain, and the UAE.

As in all his foreign travels, his Middle East tour is all about furthering US hegemonic aims.

In occupied Jerusalem, he vowed continued US support for assuring Israel's military edge in the region where its only foreign threats are invented, not real.

As always before, he was silent about the Jewish state's unlawful nuclear, biological and chemical weapons that endanger the Middle East.

His remarks included his customary litany of bald-faced Big Lies.

"Iran will never have a nuclear weapons," he roared. The Islamic Republic never had a nuclear weapons program, abhors these WMDs, and wants them eliminated everywhere — notably in nuclear armed and dangerous Israel.

"(W)e are determined to use every tool that we have to ensure that (Iran) can't get access to high-end weapon systems (and) air defense systems," Pompeo bellowed.

On October 18, the UN arms embargo on Iran expires. Henceforth, it's legally entitled to purchase weapons from foreign nations and will do so, likely from Russia, China, and perhaps other countries.

The US has no legal authority to prevent its purchases and will likely fail if tries.

Pompeo again falsely claimed that Iranian purchases and sales of its own weapons to foreign buyers will "inflict real harm, not only in the Middle East but in Europe as well (sic)" — a bald-faced Big Lie.

His trip is also about furthering US aims to pour more advanced weapons into a region already boiling from endless wars by hot and other means — the US, NATO, Israel, and their regional partners bearing full responsibility for what continues endlessly.

Praising mid-August Israeli/UAE normalization of ties, he ignored that it furthers occupation harshness and Palestinian isolation — delaying, not cancelling, Netanyahu's intension to annex illegal settlements and outposts, along with the Jordan Valley into Israeli territory — about 30% of the West Bank.

"Outlaw @SecPompeo has no qualms about violating his own country's laws."

"Standing next to World's #1 nuclear threat, he declares his desire to flood our region with even more US weapons—all while trying to impede lawful normalization of Iran's defense cooperation with the world."

"The Americans showed that they have made a miscalculation and bogged themselves down in a quagmire they had created."

They "planned for one and a half years to get the UN arms embargo against Iran extended at the Security Council."

"They prepared a resolution with 35 articles (reduced in a second draft to 4 paragraphs that) fail(ed)" to get more than scant support from a single Security Council member — its virtual colony the Dominican Republic.

Separately, Zarif stressed that Iran will not let nuclear armed and dangerous USA and Israel "disrupt our region and the world's peace and security…"

Separately on Sunday, spokesperson for the Atomic Energy Organization of Iran Behrouz Kamalvandi said the July 2 explosion at the Natanz nuclear site was an act of sabotage, adding:

"(S)ecurity officials will announce at an appropriate time how and with what materials the blast took place and what the details are."

On Monday, IAEA chief Rafael Grossi arrived in Iran for his first trip to the country since assuming his post last December.

His visit is for talks "on issues relating to safeguards, protocols, and the JCPOA," Iran's Tasnim News reported.

According to Press TV, "(t)he Islamic Republic rejects any allegations of non-cooperation with the IAEA, insisting that it is prepared to resolve potentially outstanding differences with the nuclear agency."

Iran's representative to Vienna-based international organizations Kazem Gharibabadi said Grossi's "visit is not related to the so-called snapback mechanism and does not come at the US' request. (His) trip takes place on the basis of Iran's invitation."