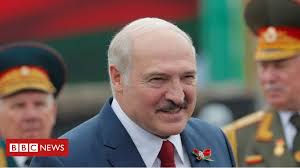 Despite ruling Belarus with an iron fist, most Belarusians support Alexander Lukashenko.

President since 1994, he was legitimately reelected by a 61.7% majority, according to the pro-Western election monitoring group Golos.

It published "data collected by US-backed civic youth organization Zubr 'Bizon' and Chestniye Lyudi ('Honest People'), an election monitoring group established by a group of programmers," Sputnik News reported. More on this below.

Lukashenko's victory margin exceeded the largest presidential landslide in US history since 1820.

Running virtually unopposed in 1820, James Monroe won by an 80% majority.

George Washington, the first US president, won unanimously in 1789 and 1792, receiving all electoral college votes.

Compared to today's money-controlled US political process, Washington did no campaigning, spending nothing to become US president twice.

Inventing the office he held from scratch, he was quoted saying: "I walk on untrodden ground."

He was the nation's larger than life figure, a general, not a politician who preferred to "liv(e) and d(ie) a private citizen on (his Mount Vernon) farm," he said.

He was called on to take the job he didn't want because his stature exceeded all others in the country at the time.

Today's America and world are vastly different than in his day, what no one in his time could have imagined.

Commenting on the state of the nation at the time, Benjamin Franklin was quoted saying that a republic was created if its ruling class ahead could keep it.

He understood that power corrupts and absolute power corrupts absolutely, what happened throughout the years to the present state of things that are far too debauched to fix.

According to Sputnik News, opposition candidate Svetlana Tikhanovskaya won 25.4% of the vote, not the officially reported 10%.

Her support was far less than the 60% majority triumph she falsely claimed, Sputnik further explaining:

"Golos' figures are based on data received after the processing of protocols from 1,310 polling stations, constituting about 22 percent of the total 5,767 polling places throughout Belarus, with protocols said to cover regions across the country, including cities, towns and villages."

"The protocols were said to account for about 1.8 million voters, or about 32.2 percent of the 5.8 million people who cast votes."

Despite results it reported, Golos claimed they're not reliable, adding:

Lukashenko won. Tikhanovskaya lost. Cross-border in Lithuania, she met with US and EU officials, manipulating her to serve their interests.

On Sunday, Sergey Lavrov accused anti-Lukashenko elements of seeking "bloodshed" in the country.

With establishment media support, Tikhanovskaya appeals more to the West than Belarusians who oppose a repeat of 2013-14 (US orchestrated) Euromaidan violence in neighboring Ukraine.

Tikhanovskaya "was not allowed to calm (things) down, and she began to make political statements, quite harsh ones, demanding to continue strikes, walkouts, protests," Lavrov explained — her remarks scripted by her US handlers.

Notably her remarks are made in English for a Western and Belarusian audience, not her native language.

Controlled by her handlers, her agenda is unrelated to strengthening democracy in Belarus, a notion both right wings of the US one-party state abhor and tolerate nowhere — not at home or abroad.

Russia is involved diplomatically to prevent a repeat of what happened in Ukraine.

The Kremlin supports the right of Belarusians to decide on who'll lead them — free from foreign interference.

Previous articles discussed the reintegration of Belarus into Russia — with or without Lukashenko.

By referendum judged open, free, and fair by international monitors, Crimeans voted overwhelming to correct an historic mistake by returning to Russia.

Belarusians deserve the same choice — to decide by independently monitored referendum whether or not to again become a Russian republic.

That's how democracy the way it should be is supposed to work.

As for my view, I support the right of the Belarusian people to decide this issue on their own, free from foreign interference.