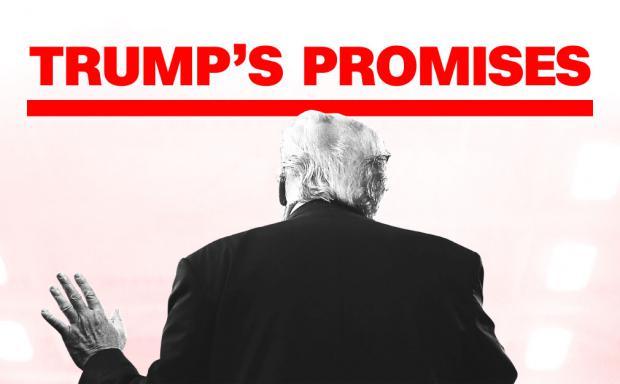 Trump's 50 Promises to be Broken

Trump elevated dissembling to a whole new level. Take nothing he says seriously.

His serial lying is so extreme that he may no longer be able to distinguish between facts and fiction.

His remarks focus on self-promotion, feeding his insatiable narcissistic appetite.

His abnormal traits include a "grandiose self-image, a very inflated ego, a continuous need for attention, a big urge to be admired."

When his needs aren't fulfilled or actions criticized, "he lashes out recklessly."

When popularity with his base fades or if Biden defeats him in November, watch out.

He won't likely go gently into that good night. Narcissists don't operate that way, notably not when forced to relinquish the public spotlight they crave.

"narcissists who fail will lash out…blam(ing) others for their failures," along with vilifying opponents who defeat them.

They see things as "winners and losers."

If Trump loses in November, "while the whole world is watching, that'll have a big impact on him" that will heighten his insecurity and rage against the system he's part of.

Dems and Republicans both falsely pledged to end forever wars that will continue endlessly no matter which wing of the US war party controls the executive and congressional branches ahead.

For the vast majority in Washington, world peace and stability are nonstarter notions they reject.

Domestic and geopolitical agendas of both right wings of the one-party state mimic each other on issues mattering most.

They're all about serving privileged interests by exploiting and otherwise harming ordinary people everywhere — at home and abroad.

The Trump campaign's claim that he's "fighting for you" defies his record in office.

He's unapologetically anti-peace, equity, justice, and the rule of law — pro-benefitting himself, his cronies, Wall Street, other corporate favorites, the Pentagon, the national security state, and favored foreign allies.

His "priorities" for a second term are continuing the wreckage of his tenure so far.

Below are some of Trump's hollow campaign promises.

After destroying millions of jobs, leaving nearly one-third of working-age Americans unemployed, the vast majority with jobs have rotten ones paying poverty or sub-poverty wages, needing two or more to survive.

Many tens of thousands of small, medium-sized, and some larger firms shut down this year because of state-sponsored economic collapse — with no prospect for recovery any time soon, the worst perhaps yet to come.

Americans owe $21 billion in unpaid rent — because of no income or not enough to pay for essentials to life and welfare.

In July, 27% of US households made no rent of mortgage payments for the same reason.

US bankruptcies are surging.

World trade was at the "lowest levels on record" in June.

Nearly one-third of laid off US workers called back by employers were furloughed again or fired.

Half of US laid off workers believe their jobs are permanently lost.

An unprecedented number of Americans filed for unemployment benefits since March — around 60 million.

At a time of growing economic misery for tens of millions of US households, Republicans and Dems are dithering and dickering while Rome burns.

The Economic Collapse blog explained that "(i)ndustry after industry is in the process of unraveling."

"Major economic bubbles are bursting all around us, and the economic pain that is on the horizon is going to dwarf what we are going through at this moment."

If the above assessment is accurate, the hardest of US hard times ever lie ahead with little or no relief likely for tens of millions of households unable to pay rent, service mortgages, afford medical care, or feed families.

Neither wing of the one-party state proposed ways to address economic collapse, turn things around, and help ordinary Americans in need.

His tax-cutting pledge is for corporate America and high-net-worth individuals like himself exclusively —a repeat of the great American 2017 tax cut swindle, part of the scheme to transfer wealth from ordinary people to privileged interests.

His pledge for a COVID-19 vaccine by end of 2020 ignores that all vaccines contain toxins that are hazardous to human health.

Rushed development of coronavirus vaccines likely means they'll be especially dangerous and should be avoided by everyone valuing their health and well-being.

Rushing them to market is all about Big Government aiding Big Pharma cash in big on a potential bonanza of profits without regard for human health and safety.

There's virtually no chance to restore US economic health in 2021. Trump's pledge for return to normality next year is hollow.

So is his promise to deliver "critical medicines and supplies" for US healthcare workers — what he failed to do since COVID-19 outbreaks began in January.

Bringing back "1 million manufacturing jobs from China" is pure fantasy.

So is excluding "federal contracts for companies (that) outsource" their operations to China.

For decades, corporate America outsourced millions of manufacturing and other jobs to many low-wage countries.

Republicans and Dems have done nothing to incentivize US businesses to operate domestically or impose financial penalties for offshoring jobs.

Trump wants China held "fully accountable for" the made-in-the-USA coronavirus it exported to China and worldwide.

Trump breached his first-term pledge to cut drug prices. Repeating the promise is hollow like the first time around.

So are his pledges to "lower healthcare insurance premiums…cover all pre-existing conditions…protect Social Security and Medicare, (and) provide world-class healthcare" to veterans.

He failed to deliver on all of the above so far. If reelected in November, more of the same is virtually assured.

"Drain(ing) the swamp" pledge is back that's far more greatly filled with benefits for privileged interests than when Trump's tenure began.

Claiming support for US workers is belied by his record in office.

He supports expansion of a US space force to let the Pentagon wage future wars with this capability.

Saying he'll "build the world's greatest infrastructure system" is belied by his record in office so far.

He's waging endless wars in Afghanistan, Syria, Yemen, and intermittently in Iraq — along with wars by other means on China, Russia, Iran, Venezuela, Cuba, Nicaragua, North Korea, and other nations unwilling to subordinate their sovereign rights to US interests.

Ignoring the Pentagon's open-ended budget, spending many trillions of dollars beyond what's congressionally authorized annually, Trump pledged to "maintain and expand America's…military strength" when it should be sharply cut back at a time when the nation's only enemies are invented, not real.

He also falsely pledged to "wipe out global terrorists" the US created and uses as proxy forces against targeted nations.

Repeating his promise to "make America great again" is all about continuing dirty business as usual.

It includes endless wars on humanity at home and abroad by hot and other means to benefit privileged interests at the expense of world peace, stability, equity, and justice for all — notions ruled out by both wings of the US one-party state.