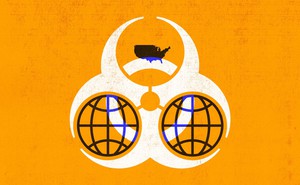 The US under both right wings of its war party threatens everyone yearning to breathe free everywhere.

Its hostile actions on the world stage risk greater wars than it's already waging by hot and other means against invented enemies.

No real ones exist. On Friday, Russia's Foreign Ministry warned its citizens abroad "that they could face a threat of persecution by the US law enforcement agencies and special services" for being nationals of the wrong country.

Incarcerating, abusing and humiliating them is part of war on Russia by other means.

Student Maria Butina was a high-profile example. In July 2018, she was arrested and falsely charged with acting as a Russian agent — what its Foreign Ministry at the time called "Russophobic hysteria."

In confinement from July 2018 – October 2019, she endured brutalizing physical and emotional mistreatment, amounting to torture.

Under a plea bargain deal despite guilty of no wrongdoing, she was released and allowed to return to Russia where she was able to speak freely about her ordeal for the first time.

Russia's Foreign Ministry explained that despite numerous attempts to normalize cooperation with Washington based on the Mutual Legal Assistance in Criminal Matters bilateral agreement, US law enforcement officials "continue to arrest Russian citizens" without just cause worldwide.

Since 2008, 56 arrests were made on trumped up charges with no validity, what Russia's Foreign Ministry called "abductions," adding:

In US custody, Russian nationals "face a biased attitude and real legal iniquity."

To obtain forced confessions to trumped up charges, "they are subjected to powerful psychological pressure and kept in unbearable conditions" that amount to torture under international law.

Despite all-out efforts by Russian diplomats to help their wrongfully imprisoned nationals in the US return home, its police state practices deny them due process and judicial fairness.

Russia's Foreign Ministry urged its nationals "to thoroughly weigh the risk of persecution by the US when planning foreign travel."

"This primarily applies to trips to the United States and the countries that have extradition treaties with it."

Separately, Russia's Information and Press Department warned its journalists in the US of force used against fourth estate members in the country.

Relating to social justice protests in Portland, OR, the US Ninth Circuit Court of Appeals overruled a district court's injunction against use of force, threats, and dispersal orders — directed at journalists involved in reporting on what's going on.

In July, the ACLU sued the DHS and US Marshals Service for deploying agents to Portland over the objections of local authorities and community members.

"(T)ear gas, rubber bullets, and acoustic weapons (have been used indiscriminately used) against protesters, journalists, and legal observers," said the ACLU in its lawsuit, adding:

"Federal officers also shot a protester in the head with a rubber bullet, fracturing the person's face and skull."

The lawsuit won at the lower court level aimed "to block federal law enforcement from dispersing, arresting, threatening to arrest, or use physical force against journalists or legal observers."

The Portland Mercury and freelance photographer Mathew Lewis-Rolland "shot 10 times in the back (by) federal agents" joined the lawsuit.

Wearing "high-visibility shirts that said 'PRESS' or 'legal observer,' " they were threatened or attacked by federal agents.

"Cowardly attacks on those who report police misconduct to the world have no place in a free society."

In its ruling that overturned the lower court, the Ninth Circuit Court of Appeals falsely claimed that law enforcement personnel cannot distinguish between members of the press and protesters — ignoring clearly visible ID of fourth estate members and legal observers.

In advising its own nationals, Russia's Foreign Ministry called the higher US court ruling "a dangerous precedent by legalizing police violence towards journalists," adding:

This "contradicts not only (the US Constitution's First Amendment), but also universally recognized democratic principles when it comes to freedom of the media and unrestricted activities of journalists."

"As of August 2020, human rights organizations have reported over 700 cases of unjustified arrests and assaults by law enforcement personnel against members of the press who are covering protests in the United States."

"This police violence is unacceptable."

It's one of countless examples of US police state practices, the country unfit and unsafe to live in — a fantasy democracy, never the real thing from inception.

You have it backwards. The global wealthy elite are being held in place by the USA. All you need do to understand this is look at the way the people of the world are being held down in this fake Covid scam by their governments. If the USA wasn't there showing freedom to world, the governments of the world would have made slaves of their people long ago. That's why people like Soros are financing organizations like BLM. He and the other elite are trying hard to bring down USA freedom.