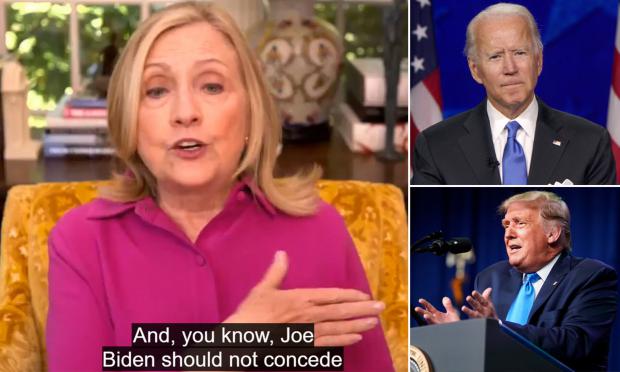 Eager to avenge her loss to Trump in 2016, she keeps resurfacing instead of fading away like old soldiers.

With Biden holding a commanding lead in most polls through late August, she went public again last week, saying the following:

"Joe Biden should not concede under any circumstances because I think this is going to drag out, and eventually, I do believe he will win if we don't give an inch and if we are as focused and relentless as the other side is," adding:

"I think that (Republicans) have a couple of scenarios that they are looking toward. One is messing up absentee balloting."

"They believe that helps them so that they then get maybe a narrow advantage in the Electoral College on Election Day."

"So we've got to have a massive legal operation, and I know the Biden campaign is working on that."

"We have to have our own teams of people to counter the force of intimidation that the Republicans and Trump are going to put outside polling places."

Political dirty tricks in the US cut both ways, a process profoundly not open, free and fair under one-party rule with two right wings.

Independent candidates are virtually shut out of contention, given no chance to compete on a level playing field.

According to investigative journalist Gregg Palast, "22% of all mail-in ballots don't get counted," citing a 2016 MIT study, adding:

The "safest way to vote" by absentee ballot is requesting one "2 months in advance."

If doesn't arrive by mid-October, pick one up "at your county board of elections, fill it out, and return it right there…and demand validation of your signature."

"In 2016, more than 141,000 ballots were rejected because someone challenged the signature."

Voter suppression is longstanding practice in the US, today done with electronic ease on corporate-controlled voting machines.

In his book titled "How Trump Stole 2020," Palest said "Trump & Co are stealing the election right now (by) ballot bandit(ry)," claiming he "stole 2016 and they're at it again."

US 2020 elections will be unlike any others in modern times with many, maybe most, voters exercising their franchise by mail - even though it's as safe to show up at polling stations as go grocery shopping most people do regularly.

"I'm not a good loser, I don't like to lose." Depending on how things turn out, he'll decide post-election whether to accept the result, saying:

His campaign manager Tim Murtaugh said "(w)e won't know what kind of shenanigans (Dems) will try leading up to November" — claiming if things are "free and fair…Trump will win."

In July, Biden accused Trump of trying to "indirectly steal the election by arguing that mail-in ballots don't work," adding:

He'll claim "they're not real…not fair." He might try to delay the election if polls show him way behind close to November 3, said Biden.

Last week Trump claimed the only way he'd lose is if things are rigged.

A statement by his campaign denied that he'll try to hijack the election.

Separately, Speaker Pelosi urged Biden not to debate Trump, saying he hasn't "comported himself in a way that has any association with truth, evidence, data, and facts."

Farcical US political debates are scripted theater without substance.

They feature well-rehearsed posturing, slogans, and one-liners over solutions to cutting-edge domestic and geopolitical solutions — along with promises made to be broken if elected.

On issues relating to war and peace, corporate empowerment, neoliberal harshness, and police state crackdowns on nonbelievers, both right wings of the US one-party state are on the same page.

Their rhetoric, style and party labels alone differ. In office they're much the same on issues mattering most.

Whenever US elections are held, dirty business as usual continuity always wins. It happens every time the same way.