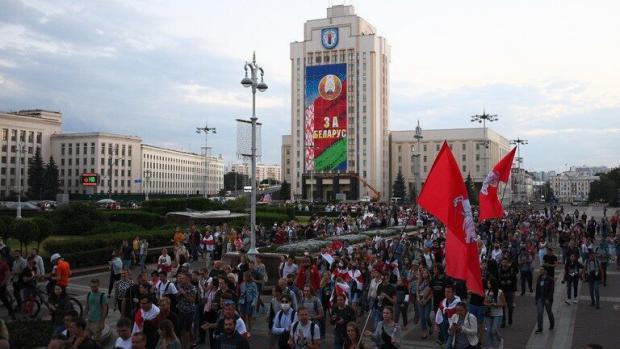 America's heartland is over 5,000 miles from Belarus. Flight time from Chicago to Minsk is over 10 hours.

In stark contrast, Belarus and Russia share a common border. Citizens of both countries can cross it freely.

Around 80% of Belarusians are ethnically Russian. Both countries share a slavic heritage.

They're each other's most important political, economic, trade, and defense partners.

In 1999, both countries signed a Union State treaty. Under its terms, their ruling authorities agreed that both nations retained their sovereignty, territorial integrity, constitutions, and statute laws.

At the same time, the treaty called for close political, economic, trade, and foreign policy coordination.

Parity was also agreed on. Union State decisions must be approved by both countries.

Eventual integration envisioned hasn't happened. Given events since President Lukashenko's reelection on August 9 — a US color revolution attempt to install pro-Western puppet rule — it makes most sense to resolve things.

After Belarus' August 9 presidential election, Pompeo vowed that the Trump regime would ensure a "good outcome for the Belarusian people (sic)," adding:

"(W)e'll take actions consistent with that." He falsely claimed that Lukashenko's reelection wasn't "free and fair" — citing no evidence supporting his accusation because there is none, other than an unnecessarily inflated victory margin.

The Trump regime is coordinating its anti-Lukashenko color revolution tactics with key EU nations and Brussels — as well as with Poland and Lithuania, both nations bordering Belarus.

Both right wings of the US one-party state reject election outcomes won by sovereign independent candidates not subservient to its interests.

In contrast to all-out US aims to replace Lukashenko with pro-Western puppet rule, Russia's response to events in Belarus conform to the rule of law.

Over the weekend, Vladimir Putin stressed that what's going on in the country is "an internal matter for Belarusian society and the people of Belarus," adding:

"We are acting in a much more restrained and unbiased way than many other nations in Europe and America."

He's monitoring events closely because Belarus is the "closest country to Russia ethnically, culturally and spiritually."

According to its provisions, Putin pledged to provide "necessary assistance, including military in case of an act of aggression," adding"

He and Lukashenko agreed on having Russian law enforcement officers on standby if needed — not to be deployed cross-border unless things spiral "out of control."

So far, Belarusian security forces are handling things with restraint — after initial days of cracking down hard on US-orchestrated protests following the August 9 election.

Putin clearly wants a repeat of Ukraine avoided. If necessary, he'll respond to events in Belarus according to the rule of law — polar opposite how US-dominated NATO operates.

He and Lukashenko agreed to meet again in Moscow on a yet to be announced date.

According to Putin spokesman Dmitry Peskov, both leaders stressed their commitment to strengthen bilateral cooperation.

The NYT sounded defeatist, saying "(p)rotesters conceded that they had no clear idea how to force Mr. Lukashenko's departure."

What's going on in Minsk was made in the USA, the Times and other establishment failed to report while expressing support for the US color revolution attempt.

The Wall Street Journal claimed that "many fear (Belarus') economic weakness could bind it more tightly to Moscow."

Fairness & Accuracy in Reporting (FAIR) noted that calls by US officials for a "muscular" or "robust" foreign policy involves "aggressively" confronting Russia, China, and other sovereign independent states it doesn't control — Belarus very much included.

On Monday, Reuters reported that political nobody/US designated Belarusian puppet-in-waiting Sviatlana Tsikhanouskaya  was invited by the Trump regime through its subservient Estonian imperial partner to address the Security Council on Friday via video link.

The struggle for Belarus' soul to remain free from US-led Western control continues.

According to geopolitical analyst at Russia's Bureau of Military and Political Analysis Vladimir Yeranosyan:

"There is no doubt that everything that is happening in Belarus is a textbook color revolution (attempt) with well-familiar mechanisms, algorithms, and manipulations in the field of social engineering and color revolution methodology," adding:

"There is the inertia as the wheel has been put in motion."

"People who have become a crowd allow themselves to be used as instruments of someone else's will."

"Those unhappy with the current state of affairs do not understand now that when utter chaos and havoc set in, their…hope for some illusory (positive change) will go down the drain."

"The most shocking thing is that the most primitive Maidan methods are being used in the beautiful Belarus which has always been admired by everyone as one of the most stable countries."

"Without a second thought, the revolution has been coded as a (made-in-the-USA) flower revolution."