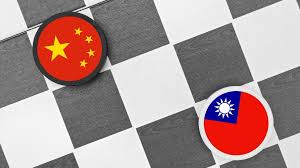 Sino/US relations are more fraught with dangers than at any time since Nixon's 1972 meeting with Mao in Beijing — followed by formal normalization of relations by Jimmy Carter and Deng Xiaoping in 1979.

According to his war secretary Mark Esper, "(t)he Pentagon is prepared for China," adding:

Beijing aims "to displace us (sic) — certainly from the region and preferably on the global stage (sic)."

"(I)f we don't wake up to the long-term challenge and the possible threat that China presents to us (sic), then we may find ourselves living in a world different (from) what we want to live in (sic)."

Pompeo called China the "central threat of our times," vowing US toughness to counter its growing prominence, a "threat" to Washington's hegemonic aims.

According to Deputy Secretary of State Stephen Biegun, the Trump regime seeks a NATO-like alliance of Indo-Pacific nations to counter China, adding:

It doesn't "have anything of the fortitude of NATO or the European Union."

"The strongest institutions in Asia oftentimes are not, I think, not inclusive enough and so…there is certainly an invitation there at some point to formalize a structure like this."

Today it has 30 with longterm aims of expanding the alliance worldwide to serve US imperial interests.

As long as it exists, world peace and stability will remain unattainable.

The risk of global war with nuclear weapons will haunt humanity at a time when Washington's only enemies are invented. No real ones exist.

China, Russia, Iran, and other sovereign independent countries on the US target list for regime change seek cooperative relations with other countries, confrontation with none.

Their military expenditures are a small fraction of what Washington spends for global militarization and belligerence.

NATO has always been about offense, not defense, notably since the Soviet Union dissolved nearly 30 years ago.

As long as the alliance exists and expands, a permanent state of war will threaten humanity.

The US "is not going to back down from its long-held principles that the world's ocean-ways and international waters should be free for navigation, and the same with space and with air rights in international airspace."

He added that so-called "quad" countries USA, Japan, Australia and India meetings are planned in September and October to counter China.

Pompeo and O'Brien aim to enlist other Indo-Pacific nations to ally with the US against China, a policy certain to heighten regional tensions more than already.

According to the Nikkei Asian Review, "(a) smarter way for Asia to move forward…would be to avoid ideological conflict, accept the region's realities, set aside or solve sovereignty disputes and focus on the hard-nosed issues of economic development for which the region has a good track record," adding:

This "approach is necessary because previous attempts to forge a common Western-led Asian strategic structure have had little success."

Since then, there's been no multinational Asian military alliance — what Washington wants reestablished to serve its regional imperial interests.

Earlier attempts to include India in a pro-Western Asian alliance fell short.

The US is an unreliable partner because of its global militarism and belligerence at the expense of cooperative relations among the world community of nations that mutually benefit them all.

Washington's notion of a "free and open Indo-Pacific" is all about its aim to dominate the region.

At this year's Association of Southeast Asian Nations (ASEAN) summit, former Singaporean Prime Minister Lee Hsien Loong warned that "(w)e  do not want to end up with rival blocs forming or countries having to take one side or another."

Asian nations should work cooperatively with others worldwide non-confrontationally in the interest of regional and world peace.

It's also in their interest to have the Indo-Pacific Asian-led, not dominated by a non-regional power.

Separately, a Pentagon warship provocatively sailed through the 112-mile-wide Taiwan Strait for the second time in two weeks — defying the Sino/US agreed on one-China principle, prompting its Foreign Ministry to express "deep concerns to the US side," adding:

"The Taiwan question is the most sensitive and important issue between China and the US."

"We urge the US to abide by the one-China principle and the three joint communiques, to be prudent and act appropriately with regards to Taiwan so that it doesn't harm China-US relations and the peace and stability in the Taiwan Strait's region."

"We sternly warn related parties that any statement and act that sabotages the one-China principle and stirs up trouble in the Taiwan Straits does not fit the fundamental interests of China and the US, and damages the well-being of compatriots on both sides of the Taiwan Straits, as it brings a real threat to peace and stability in the region, which is very dangerous."

Beijing rejects a statement by the Pentagon, saying the transit of its warships through the Taiwan Strait "demonstrates the US  commitment to a free and open Indo-Pacific," adding:

"The US Navy will continue to fly, sail and operate anywhere" in international waters and airspace.

Last week in agreement with China, Taiwanese President Tsai Ing-wen warned "of the risk of accidental conflict from the rise in (regional) military activities."

According to Chinese military expert Song Zhongping, provocative transiting of the Taiwan Strait by US warships poses a "real threat" to Beijing.

It risks possible collisions with Chinese warships that monitor its waters or an incident resulting in confrontation.

Along with its vessels, PLA satellites, radar, aircraft, reconnaissance drones, and warplanes monitor movements of US regional military forces close to Chinese territory.

If trespass into its waters or airspace occurs, a defensive response follows to counter the intrusion.

China Arms Control and Disarmament Association advisor Xu Guanghu noted that provocative US military activities in the South China Sea and Taiwan Strait help the PLA prepare for combat by treating the intrusions as "simulated enemies."

A PLA spokesman explained that its forces are on constant high alert to defend Chinese sovereignty and territorial integrity against threats posed by the Pentagon's regional presence.