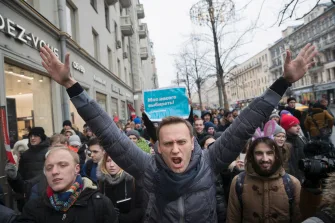 The Russians Did It Hoax Roars Again

Time and again when accusations against Russia surface, no evidence accompanies them as proof because none exists.

Most often when Russia faces dubious accusations, they're strategically linked to another issue.

No evidence or motive suggests Moscow's responsibility for what happened to Alexey Navalny.

Claims otherwise are fake on their face.

What happened to Navalny may also relate to events in Belarus.

The US and its imperial partners want him replaced by a pro-Western puppet they control in a nation bordering Russia.

Does blaming Moscow for what happened to Navalny help the US-led West's color revolution plot against Lukashenko?

It's highly unlikely, a much different situation when it comes to Nord Stream 2.

While Angela Merkel and likely most others in her government support the project, anti-Russia hardliners in the country oppose it, Navalny's status adding muscle to their position.

Threatened US sanctions on entities and individuals involved in the pipeline's construction represent a significant obstacle to its completion.

On August 27, Russia requested that Germany provide it with a toxicological analysis of Navalny's blood, urine, liver, kidneys and lungs that would show novichok traces if present.

With no response after 10 days, Zakharova accused Berlin of playing a "double game," failing to make public evidence backing its accusation — suggesting there is none.

Separately on Sunday, German Foreign Minister Heiko Mass threatened unlawful sanctions on Russia over what happened to Navalny that no evidence suggests the Kremlin had anything to do with as Merkel and her government know — Mass saying:

"If there are no contributions…from the Russian side in the next few days, we will have to discuss an answer with our partners," adding:

"When we think about sanctions, they should be as targeted as possible."

"I hope that the Russians will not force us to change our position on Nord Stream 2."

"If the Russian side does not participate in the investigation of the crime against Mr. Navalny, this would be a further indication of the state's involvement in the crime."

"If (it) has nothing to do with the attack, then it is in its own interest to back this up with facts."

It's Germany's turn to put up or shut up, as the saying goes.

As long as Berlin stonewalls Russia and the world community by failing to present its alleged "unequivocal evidence" of novichok poisoning, it's clear that there is none, that claiming Navalny was poisoned is a hoax.

On her Facebook page, Zakharova stressed that "Berlin is stalling the process of investigation for which it's calling. On purpose," she asked?

The answer is self-evident.

On the issue of Navalny's status and much more, Germany sides with Washington's imperial project, including its hot wars and war on Russia by other means — a reliable political, economic and trade partner it scorns to its disgrace.

Germany's right-wing Bild broadsheet slammed Merkel for saying Nord Stream 2 should be considered apart from what happened to Navalny, adding:

"Vladimir Putin views the gas pipeline as an important strategic weapon against Europe and as a vital source of funding for his war against his own people (sic)."

Along with their US establishment media counterparts, the London Guardian is militantly hostile toward Russia.

Over the weekend, it called for "hit(ting) back at Putin" based on phony claims that Navalny was novichoked.

"For years, we have misunderstood the game of chess that the Kremlin has been playing with us (sic)," adding:

"And now we cannot pull the sanction strings any tighter without garrotting ourselves."

Its "use…against a political opponent has genuinely shaken the…pillar (of) strategic selective engagement" with Russia, adding:

"At the moment it is hard to see where the common basis for a strategic engagement could be."

Der Spigel called for U-turning on Nord Stream 2 to hit Putin "where it hurts."

The UK owned and controlled BBC slammed Trump for not condemning Russia over what happened to Navalny.

The UK propaganda operation claimed "proof beyond doubt" of Russia being behind what happened — despite no evidence presented that suggests it.

Trump aside, his National Security Council pledged to "work with allies and the international community to hold those in Russia accountable" for what it had nothing to do with.

The Navalny incident has legs. Falsely accusing Russia for what happened is likely to continue roaring.

If Nord Stream 2's completion is suspended or German cooperation with Moscow on the project cancelled, dark forces in the US and West will benefit at the expense of cooperative relations with a valued Russian partner.