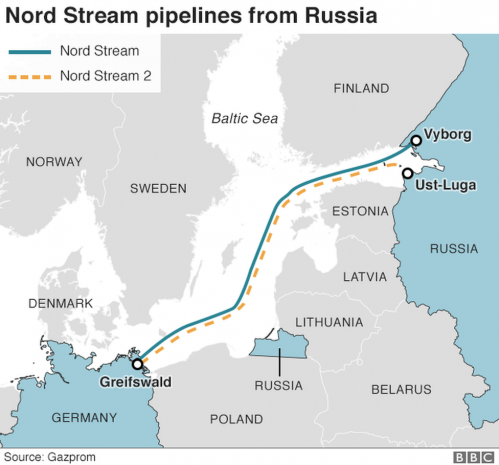 The project will be mutually beneficial for Russia, Germany, and other European countries that will have access to a steady source of supply from a reliable trade partner.

The alternative is 30% more expensive liquified natural gas (LNG) from US producers — thousands of miles distant from the continent.

As the saying goes, deciding between both alternatives is a no-brainer — unless politicizing the issue triumphs over economic considerations.

From inception, Germany's Angela Merkel and most members of her government supported the project.

A German military lab novichok nerve agent poisoning diagnosis flies in the face of Russian toxicologists who found no toxins in his system, diagnosing his illness as a metabolic disorder, perhaps from low blood sugar.

Exposure to novichok, the deadliest of all known toxins, nearly always causes death in minutes.

Hospitalized in Berlin, Navalny is recovering. If poisoned by a novichok nerve agent at a Tomsk, Russia airline terminal. he'd have died before boarding a flight to Moscow. He fell ill airborne en route to the city.

After days earlier repeating her continued support for Nord Stream 2's completion, Merkel wavered, saying it's "wrong to rule anything out" through her spokesman because of what happened to Navalny — despite no evidence or motive linking his illness to the Kremlin.

On Monday, her spokesman said she "agrees with the foreign minister's comments from the weekend' — after earlier stressing that the pipeline's completion and Navalny's condition are separate issues.

Is the lady for turning? Is U-turning on Nord Stream 2 under consideration?

Will Merkel and others around her bow to Washington's will on Nord Stream 2, its bipartisan hardliners wanting the project undermined to benefit US LNG producers?

Will she play politics over economic common sense, jeopardizing a valued political and trade relationship with Russia at the same time?

According to Reuters on Tuesday,  she and her economic minister Pete Altmaier "played down the possibility of halting the Nord Stream 2 gas pipeline from Russia to Germany as part of any sanctions imposed on Moscow due to" what happened to Navalny, adding:

She's "consulting" with her "European and NATO partners on how to respond if Russia fails to help clear up what happened to Navalny."

At a Tuesday meeting with German MPs, she "took a cautious line on the pipeline," according to unnamed lawmakers involved, said Reuters.

Opinion among participants was "divided."

"At the EU level, many would not explicitly make a connection between the Navalny case and stopping the pipeline," according to unnamed officials involved in the meeting.

According to German Eastern Business Association head Michael Harms, it's "hardly possible…legally to halt completion of the pipeline."

"All permits have been granted. The contracts are watertight — not only in Germany, but also in five countries plus under European regulations."

If Russia's Nord Stream 2 is sanctioned, its completion halted or abandoned, this action "will jeopardize about 12 billion euros of investments in the EU's energy infrastructure," according to a statement by Nord Stream 2 AG — the Swiss-based firm established to plan, construct and operate the pipeline.

The company added that "(t)his infrastructure was built to deliver gas from (the pipeline) to markets throughout Europe" that's essential to their economies.

According to Bundestag Committee on Economic Affairs and Energy head Klaus Ernst, if Nord Stream 2's construction is halted, German and European companies involved in the project will incur huge losses — along with harm to the continent's economies, adding:

"The opponents of Nord Stream 2 are now trying to use the events to sink the project in the Baltic Sea."

If happens, it "does not benefit Russia, Europe or Germany. It primarily benefits the USA, in whose economic interests it is that our relationship with Russia is deteriorating."

"Once again, Russia is blamed across the board and without sufficient evidence."

Bundestag energy committee member Steffen Koltre noted that European business and household consumers will pay much more for gas if the project is suspended or halted.

In the wake of Navalny's illness no evidence links to Russia, will the fate of Nord Stream 2 be decided by political or economic reasons?

At this time, the issue is undecided.

While it's likely that the project will be completed as planned, it's unclear whether Germany and the EU will resist or bend to heavy US pressure.

Putin spokesman Dmitry Peskov is optimistic that the pipeline will be completed as planned.

Statements by anti-Russia politicians calling for it to be suspended or halted are absurd, he stressed, adding:

Russia is ready to fully cooperate with Germany to determine what happened to Navalny.

Resolving things diplomatically is in the interests of both countries and Europe to assure completion of Nord Stream 2 as planned.