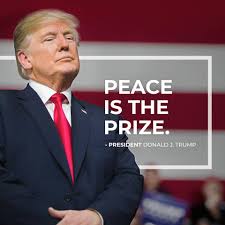 Time and again, the US and other Western societies honor their worst, scorning their best — notably on issues of peace, equity, justice, and the rule of law.

Since Nobel Committee members began awarding peace prizes in 1901, numerous US and other Western war criminals were named honorees.

Dubious recipients of the award included the following war criminals and warrior leaders:

Theodore Roosevelt who once said "I should welcome almost any war, for I think this country needs one."

Woodrow Wilson who breached his vow to keep the US out of WW I.

Trump was nominated for the Nobel Peace Prize in 2018, again this year by right-wing  Norwegian lawmaker Christian Tybring-Gjedde.

Defying reality, he said DJT "has done more trying to create peace between nations than most other Peace Prize nominees (sic)," adding:

He helped to formally establish Israeli/UAE relations, falsely claiming "this agreement could be a game changer that will turn the Middle East into a region of cooperation and prosperity (sic)."

He also praised his summit talks with North Korean leader Kim Jon-un — ignoring one-sided US demands in return for phony promises to be broken.

He hailed Trump's no-peace/Israeli-Palestinian/dead-on-arrival deal of the century that's more one-sidedly unacceptable than what any of his predecessors proposed.

The winner of this year's Nobel Peace Prize will be announced on October 9.

While predicting who'll get the award is a mug's game, it's highly unlikely to be Trump at a time when it appears that US dark forces want him defeated in November.

Whoever is named this year's honoree, Nobel hypocrisy most often scorns peacemakers in favor of belligerents.

The tradition is likely to continue next month — though occasionally there's an October surprise.

Throughout his tenure, Trump and hardliners around him have been more peace-wreckers than promoters.

He withdrew from UNESCO and the UN Human Rights Council, threatened to leave the World Trade Organization, and suspended US funding to the WHO.

New START with Russia is next on his target list to abandon, the nuclear arms control treaty expiring in February 2021.

He walked away from the Open Skies Treaty.

He's waging economic, trade, and sanctions war on China, Russia, North Korea, Iran, Venezuela, Cuba, Nicaragua, and other nations that are all about immiserating their people and suffocating them into submission to Washington's will.

All of the above are based on Big Lies, his regime's unlawful actions exposed by truth and full disclosure.

If an anti-peace prize existed, he, nearly all his predecessors, and most current and past congressional members would qualify as recipients.