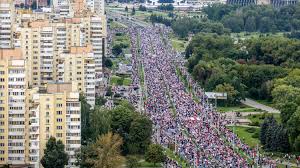 Weeks after Belarusian President Lukashenko's overwhelming August 9 reelection and foiling of an attempt by US dark forces to topple him in favor of pro-Western puppet rule, orchestrated street protests in the country continue.

What's going on was planned long before he won another term in office, likely to continue for some time, perhaps months longer, similar to US-orchestrated violence, vandalism and chaos in Hong Kong last year and sporadically in 2021.

The Trump regime and CIA aim to eliminate a Russian ally and gain another US client state at the same time — despite long odds against achieving their objectives.

Deputy Secretary of State Stephen Biegun is heading US efforts for regime change in Belarus.

On Friday, he defied reality, saying "the (US) wants to see a sovereign, independent, successful Belarus in which the Belarusian people themselves have the right to choose their own future (sic)."

"We commend the unwavering courage of the protesters who we've seen on the streets of Belarus, peacefully asserting their right to choose their own leaders in a free and fair election and not subject to unjustified violence or repression by their own ruler (sic)."

Most Belarusians support Lukashenko, despite his authoritarian rule.

A minority in the country were enlisted by US dark forces to take to the streets straightaway after his reelection.

Events were and continue to be orchestrated in Washington, similar to previous US new millennium color revolution attempts — some succeeding, others foiled.

Loyal to Lukashenko Belarusian security forces successfully defended the country's sovereignty so far against efforts by US dark forces to eliminate it.

Washington seeks control over all other nations, their resources and populations by brute force if other tactics fail.

It tolerates governance of, by, and for everyone equitably nowhere, not at home or abroad — democracy the way it should be considered an anathema notion.

The aim of US dark forces in Belarus and elsewhere is polar opposite wanting ordinary people to "be able to determine their own path free from outside interference or threats," as Biegun falsely claimed.

Belarus borders Russia. The US seeks control over the country to use as another dagger pointed at its heartland.

Hardline-run Lithuania is a virtual US colony, its ruling regime obeying a higher authority in Washington.

On Sept. 11, the Belarusian Telegraph Agency (BelTA) slammed Lithuanian MPs for unanimously voting on Thursday to recognize overwhelmingly defeated, political nobody, US designated puppet-in-waiting Svetlana Tikhanovskaya as Belarusian president — a farcical Guaido scenario 2.0 with no legitimacy.

Lithuania's unlawful action was the first of its kind against Belarus.

"We have to state with regret that the resolution of the Seimas of Lithuania (its parliament) on 10 September is an unceremonious and awkward attempt to intervene in the domestic affairs of Belarus."

"It is another testimony to the clumsy efforts of the Lithuanian side to give seriousness and meaning to their political actions."

"More than that, by doing this they undermine trust in all the proposals of external mediation laying bare their real, not declarative goals" — acting as a US proxy.

So far, EU authorities in Berlin, Paris, Rome, and Brussels oppose blacklisting Lukashenko as urged by US puppet regimes in Poland, Lithuania, Latvia and Estonia.

On Saturday, Belarusian Defense Minister Viktor Khrenin said the Pentagon deployed a tank battalion to Lithuania around nine miles from the border between both countries, adding:

"The movement of NATO troops is taking place in territory adjacent to us, within the framework of the Enhanced Forward Presence and Atlantic Resolve operations."

"The fact that about 500 people, 29 tanks, and 43 Bradley Fighting Vehicles will be in such close proximity to our border cannot do anything but worry us."

He issued a statement saying the following:

"I would like citizens to think about whether their actions violate rights of other people or not before taking such actions."

"Maintaining public order is a necessary condition for a dialogue in the society."

"Regardless of foreign control, there are many active organizers and proponents of the policy of these Telegram channels inside the country."

"They control tens, hundreds, thousands of people. They organize these protests, organize in advance."

"Many cells were created before the presidential election: cells of 3-5 people at small enterprises and cells of up to ten people at large enterprises."

"They have been preparing for (street actions to take place) after the parliamentary elections. We lived in a calm country and thought that things will stay calm. No way! And today they've popped up."

Lukashenko called on public prosecution officers and the Constitutional Court to "take more powerful, more aggressive prosecution measures in response to" what's been going on for weeks.

Events in Belarus are what a made in the USA color revolution attempt is all about — so far foiled by security forces.

On Monday, Lukashenko will meet with Vladimir Putin in Sochi, Russia.

According to St. Petersburg Politics Foundation head Mikhail Vinogradov, "Belarus is of huge importance" to Moscow. "Putin doesn't want to end up on the losing side."