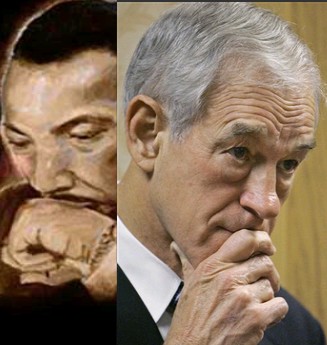 Money Bomb Monday
Monday, January 21st, 2008 will be Ron Paul's third money bomb.  We raised $4 million the first time, $6 million the second time, and now in the first money bomb of the year, coinciding with another despised hero of our time, how much money are we going to raise to keep the fight going onto March?  Ron Paul is going all the way to the convention.  How much his message will be heard directly depends upon you -- not just in your activism but in your wallet.  The fight is never over.  The fight has just begun.  Beware the Ides of March.

Dr. Ron Paul has personally asked for this one to be big!! We need the $$ for a national campaign and to show the Nation that we are as strong as ever. Please watch this video for a little inspiration and give what you can this Monday. Also spread the word to friends and family. We need this to put us over the top!

Please use RPAZ01 in the project code when donating! This will show Ron Paul what kind of support he has from Arizona!

And from the desk of Amanda:

They addressed the concerns of supporters about how the campaign is spending money and assured listeners that there is a well thought out and deliberate strategy to win the nomination. "Be patient, Ron Paul's has been in this a long time, he knows what he's doing. He's certainly the tortoise who is going to win the race, so please be patient, he's smart!" "And keep in mind we are only 3 or 4 states into it and we have a tremendous amount of time left and we still have this money." Jesse indicated the campaign is working toward a big win on February 5th and they're hoping people don't forget the upcoming money bomb on the 21st of January. He said Ron Paul needs the money to accomplish their goals and they also don't want the old media to spin the lower numbers as an indication decline in his campaign.
Addendum:
January 21, 2008


What a shot in the arm the Nevada caucuses were, where we took the silver as #2, beating McCain, Huckabee, Thompson, and -- of course -- Giuliani. We also got four more delegates. In South Carolina, we beat Rudy again. A big thank you to all our wonderful donors, volunteers, and voters. So many people worked so hard to spread our message of liberty, honest money, peace, and free-market prosperity. I owe you all my deepest gratitude.  So do our fellow citizens. So do all future Americans.  Most of the mainstream media continue to pretend that we do not exist. Yet soon the race will be down to four candidates-Romney, McCain, Huckabee, and me, and there is no stopping us, as Tim Russert grudgingly pointed out the other night. Thanks to you, we are in this all the way through a brokered convention.

Nevada, by the way, is known as the Silver State for a reason-its great mining industry produced the precious metal for the beautiful silver dollars minted at the fabled Carson City mint. These constitutional coins, include .775 ounces of silver, in accord with the Coinage Act of 1792. Today these coins, worth $1 in my father's day, have about $14 in silver. That is, the dollar is worth 1/14th of what it was, thanks to the counterfeiting Federal Reserve.

The Fed has again taken our country into a terrible crisis. Who else is talking about honest money that cannot be printed up at will by DC bureaucrats? My opponents in both parties are all some variety of print-and-spend Keynesians. Only we are telling the truth, about who is to blame for this recession, and how we can build real prosperity with sound money, no IRS, no deficit, and strict obedience to the Constitution. And, of course, no hyper-expensive, hyper-dangerous empire all around the globe.

When I met with some great ladies in Charleston, all of whom wore beautiful hats, I talked about the young people flocking to our banner.  "Don't forget the young at heart," said one. Darn right! A youthful outlook, work ethic, and optimism characterizes all of us. Frederic Bastiat predicted many years ago that liberty would be saved by the young. He might have added the young at heart as well, and how right he was!

I continue to be astounded not only by all our revolutionaries, but by our fellow travelers. Democrats and even the workers for my Republican opponents come up to me to talk about our ideas. They are fascinated, and want to learn more. Reaching so many people doesn't necessarily mean a victory in the next primary, but it counts for the real changes we want in our country, now and for our children and grandchildren.

Of course, I am mainly paying attention to the next primary!  We are working hard in Florida, in Louisiana for the caucuses, and then for Super Tuesday in more than 20 states. Meanwhile, the whole world is watching how we do tomorrow in fundraising, on a day dedicated to the memory of Martin Luther King, the great champion of non-violence at home, peace abroad, and civil disobedience against tyrannical government.

Please make your most generous donation  https://www.ronpaul2008.com/donate/ .  We can't let this movement be stopped, nor slowed. I promise you that I will continue to pour all my heart and mind and strength into the battle. I know you will too. Let's work together for all we love, and all we hope for: freedom!  Surely, it is worth all our efforts.