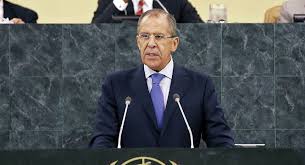 Addressing the world body from Moscow in its 75th anniversary year, Lavrov praised its post-WW II founders — despite failure of the organization to fulfill its founding principles.

Established in 1945 to prevent the scourge of another devastating global war, the UN was largely co-opted to serve US-led Western interests.

Its secretary-general and other key officials are installed by Washington with input from its imperial partners.

Instead of pursuing a new era of world peace and stability, endless wars by hot and other means rage with no end of them in prospect.

Instead of adhering to UN Charter principles, its secretariat, other organs, and key departments consistently breach them.

Instead of opposing US-led aggression, key UN officials support it by failing to denounce what no one should be silent about.

Instead of supporting victims of aggression, they tacitly back perpetrators by failing to demand accountability for their high crimes.

Instead of demanding respect for the sovereign rights of all nations, free from foreign interference according to international law, the UN secretary-general and other key officials ignore US/NATO/Israeli aggression, state terror, and other high crimes of war and against humanity — tacitly supporting what demands condemnation.

Lavrov denounced Western revisionists, saying "attempts to revise history and denigrate the role played by the nations that made a decisive contribution to victory over fascism are totally absurd" and offensive to the indispensable role they played.

Without Soviet Russia's contribution on the Eastern front, Nazism might have triumphed.

"New hope (arose) with the fall of the Berlin wall" — dashed again by US new world order objectives to rule the rule unchallenged.

"(M)ilitary military conflicts continue unabated" today with no end of them in prospect.

Support by Russia and other nations for restoration of peace and stability is ignored by both wings of the US war party and their imperial partners because they're "not willing (to observe the rule of law and respect) for the legitimate interests of other states."

US "rules-based world order" includes flagrant breaches of international and constitutional law, including "unilateral sanctions in violation of the UN Security Council prerogatives, and exhibiting intolerance and hatred."

"The world is tired of dividing lines, of separating states into friends and foes, and demands stepping up all-encompassing and inclusive mutual assistance and cooperation."

"In other words, the goals articulated 75 years ago at the founding of the United Nations are becoming increasingly relevant."

"(T)here is no alternative to genuine multipolarity and…collective efforts to find solutions to global issues with the UN playing its central coordinating role."

As he's done before, Lavrov called for "(s)ettling conflicts exclusively by peaceful, political and diplomatic means within the framework of internationally recognized negotiating formats," adding:

It's vital to "stave off attempts to weaken arms controls, disarmament and non-proliferation frameworks for the sake of global stability."

Separately, Lavrov denounced unacceptable US demands and ultimatums, its unlawful go-it-alone sanctioning of Iran and other countries.

The Security Council "clearly stated that there is no legal position or moral reasons for anything close to the snapback and all the statements to the contrary are null and void."

US JCPOA-related actions against Iran left it isolated on the world stage, opposed even by its allies.

"The Americans lost any talent in diplomacy…They used to have excellent experts," said Lavrov.

"Now what they're doing in foreign policy is to put a demand on the table, whether they're discussing Iran or anything else."

"(T)hey give a deadline and then they impose sanctions, then they make the sanctions extra-territorial."

Most often, the EU operates the same way — extrajudicially.

US snapback sanctions on Iran are null and void.

"There is no such thing as an arms embargo against Iran" when the UN ban expires on October 18, said Lavrov, adding:

At that time, they'll "no limitations whatsoever" on selling conventional arms to Iran or buying weapons it wishes to sell.