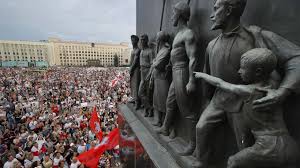 Time and again, the UN Office of the High Commissioner for Human Rights (OHCHR) sides with Western interests against nations its officials want transformed into vassal states.

In response to the OHCHR's support for the made-in-the-USA coup plot against Belarusian President Lukashenko, Russia's Foreign Ministry denounced its action, saying:

"We assume that the (anti-Belarusian) UNHRC resolution was jammed through by the West in violation of principles and norms of the international law (making it) legally void."

The largely pro-Western Human Rights Council voted 23 - 2 in favor of the unlawful resolution, 22 of the body's 47 member states abstaining.

"We note with regret that a group of countries led by the European Union imposed on the HRC another lopsided and politicized discussion, the goals of which were very far from the real concern for human rights."

"This debate represents a blatant interference in the internal affairs of a sovereign state, incompatible with the principles of international law and the provisions of the UN Charter."

"We view the debate and the adoption of the politically-driven draft resolution as an unacceptable attempt to influence, by gross political pressure, the results of the election in Belarus and its assessment in the international community."

"We assume that neither the UN Human Rights Council nor individual countries or groups have the right or authority to evaluate electoral processes in UN member states" — especially when grossly distorting their right by considering the winner the loser in support of a US designated puppet it wants installed.

Russia also slammed the Austrian representative. Presiding over HRC proceedings, he allowed its gross violation of international law by failing to block what went on, saying:

"We strongly condemn such actions, which are incompatible with the neutral status of the presidency in the UN collective bodies."

Though not a current HRC member, Belarus also denounced the unlawful meddling in its internal affairs.

The action requires unanimity among its 27 member states.

Cyprus blocked what other EU states support in cahoots with the US coup plot against Belarusian sovereignty.

In mid-August, Cypriot envoy to the EU Nicholas Emiliou voted against imposition of bloc sanctions on Belarus because other member states failed back Nicosia's demand to sanction Turkey for oil and gas exploration in what the Cypriot government considers its own Mediterranean waters.

"Cyprus remains committed to its original stance. The ministers failed to agree on a blacklist. The issue has now been postponed until the summit meeting due at the end of this week," adding:

"The ambassador level meetings over the past weeks showed that the situation is not simple."

"As you may know, the ambassadors' latest meeting was on Friday and it ended inconclusively, so it was very easy to predict there will be no agreement at the Council's session on Monday."

"Now the issue will be discussed at the summit meeting on Thursday and Friday" this week.

"(T)oday there are already sufficient grounds to assert that a multilateral policy…no longer provides the external conditions we need for the favorable development of Belarus."

The country's "top priority (should be) strengthening political, economic and military relations with Russia, within the framework of the Union State" between both countries.

He also stressed that Belarus should focus away from the West toward becoming part of a "Euroasian macroregion."

Ahead of US designated puppet Svetlana Tikhanovskaya's meeting with EU foreign ministers in Brussels, Belarus' Foreign Ministry's press secretary Anatoly Glaz slammed what he called  "brazen and blatant interference in the internal affairs of our country and total disrespect for its citizens," adding:

"Why conduct an election if one from the outside can simply appoint a certain subject convenient in all respects and pretend to build a relationship with him or her?"

"After such steps…no one will have to prove that the course to undermine the sovereignty of Belarus is being implemented."

"Our principled and clear position on the matter has already been communicated to the EU representative in Minsk, as well as to the relevant persons in Brussels."

Days earlier, reciting remarks scripted by her US handlers, Tikhanovskaya called for the "international community" to intervene against Belarus' legitimate government — expressing support for breaching the UN Charter and other international law, how the US and its imperial partners operate globally.

"We call on the European Union to reconsider this course, which leads to the erosion of the legal basis of the international order, and in the case of Belarus, hinders normalization in the country."

"Our position regarding the sanctions mechanism used by the European Union (and US) is well-known."

"It is illegitimate in terms of international law and represents unacceptable interference in internal affairs."

"And in the context of the situation in Belarus, it contradicts the goal of restoring stability, establishing a dialogue, launching the constitutional process, and easing tensions, which EU representatives have said so much about."