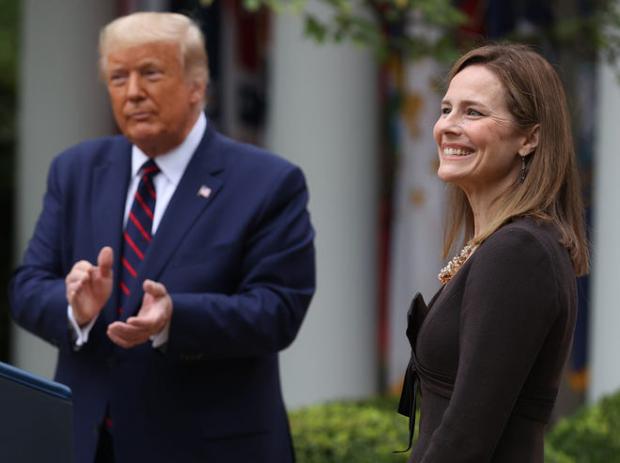 If confirmed by the GOP-controlled Senate as expected pre-November elections, it'll shift the High Court to a far-right 6 - 3 majority, potentially for many years to come.

More on Barrett below.

In his book titled "Democracy for the Few, Michael Parenti called the US Supreme Court the "aristocratic branch" of government.

Its appointed members have lifetime tenure if they wish, able to use their power for good or ill, more often the latter than former.

Parenti explained that majority High Court justices most often side with privileged interests over the general welfare.

Throughout most of the New Deal 1930s, SCOTUS "was the activist bastion of laissez-faire capitalism."

The Warren Court was an exception to the rule, supporting civil liberties and economic rights of all Americans, not just for the privileged few alone.

Its notable Brown v. Board of Education ruling (1954) held that "separate educational facilities are inherently unequal" — a major step ahead of 1960s civil and voting rights legislation.

From inception to now, privileged interests have run the US for their own benefit at the expense of ordinary people at home and abroad.

America was always ruled by men, not laws, who lie, connive, misinterpret and pretty much do what they want for their own self-interest and powerful constituents.

It aims to subvert social justice in defense of wealth and powerful interests exclusively.

In 1803, Marbury v. Madison was a defining High Court ruling.

According to then-Chief Justice John Marshall, it established the principle of judicial supremacy, the High Court being the final arbiter of what is or is not the law.

By judicial majority, justices define the Constitution — the highest law of the land — according to how they interpret it.

The Court ruled that black slaves and their descendants had no constitutional protections, no due process or equal protection rights under law, no right to become US citizens, no right to abolish their property status.

In Santa Clara County v. Southern Pacific Railroad (1886), SCOTUS granted corporations personhood under the 14th Amendment with all accruing rights and privileges but none of the obligations.

In Korematsu v. United States (1944), the Court ruled for Franklin Roosevelt's Executive Order (EO) 9066 constitutional, ordering the internment of Japanese Americans during WW II — because of their race and cultural heritage.

In Bush v. Gore (2000), the Court overruled the majority vote (and later the Electoral College majority for Gore) to make GW Bush president.

In Citizens United v. Federal Election Commission (2010), the Court ruled that government can't limit corporate spending in political elections — solidifying US money-controlled elections over democracy the way it's supposed to be.

Notably throughout US history, for every Justice William Brennan and Thurgood Marshall, they've been numerous John Jays (the first chief justice), Roger Taneys, William Howard Tafts, Scalias, Burgers, Rehnquists, and Roberts — along with countless other right-wing extremists like those on today's High Court.

If confirmed as expected, Amy Coney Barrett will strengthen their ranks.

According to the New Civil Rights Movement (NORM), Trump nominated "right wing extremist" Barrett for SCOTUS without "interviewing any other candidates," adding:

She's "anti-LGBTQ, anti-choice, and would vote to strike down Roe v. Wade and same-sex marriage."

"She has made clear she does not respect stare decisis, the legal tenet that says Supreme Court decisions are settled law."

Aged-48, she could serve on SCOTUS for decades.

The New York Intelligencer called her nomination and likely confirmation "the triumph of Phyllis Schafley," adding:

"Schafley's far-right, anti-feminist ideology has taken over the Republican party" — Barrett cut out of her mold.

She's a member of People of Praise, "a 'covenant community' that promotes strict gender roles with an emphasis on the submission of women, and which once called female members 'handmaidens.' "

She's an anti-feminist in favor of abolishing the right of women over their own bodies.

A former clerk to right wing Justice Antonin Scalia, she's ideologically like him.

In 2019, she dissented from a majority 7th Circuit ruling that affirmed the 8th Amendment's prohibition of cruel and unusual punishment.

Months earlier, she argued against entry to the US of immigrants who may one day need public assistance.

Her staunch Catholicism isn't an issue.

What's disturbing is her ideological extremism against equity and justice under international and constitutional law.

She hasn't ruled directly on abortion, but votes she cast indicated opposition to Roe.

She backs gun ownership rights for convicted felons with a proviso.

In one case, she argued that absent evidence of violent behavior, a businessman found guilty of mail fraud retained his 2nd Amendment right to "keep and bear arms."

At the same time, she said "legislatures have the power to prohibit dangerous people from possessing guns. But that power extends only to people who are dangerous."

In a campus sexual violence case, she supported the right of an accused student to challenge how school authorities handled the case, saying:

"The case…boiled down to a 'he said/she said' " situation, adding that school officials may have believed the female student "because she is a woman."

Perhaps they disbelieved the accused "because he is a man."

Of concern to supporters of equity and justice for all is how Barrett may rule on women's reproductive rights, retaining or ending Obamacare, and virtual house arrest if ordered again to deal with increased COVID-19 outbreaks if occur.

It's a somewhat more contagious form of seasonal flu/influenza, why misdiagnosis is widespread.

In terms of the human toll and cost, it's far more serious than COVID-19.

Yet no lockdowns are ordered or contemplated, no media-promoted fear-mongering or mass hysteria.

If November's presidential election outcome is contested, Barrett will have a say on its outcome.

It may be a heavily contested repeat of Bush v. Gore that could leave things unresolved for weeks or longer.

As a Trump appointee to the 7th Circuit Court of Appeals and SCOTUS, will Barrett be biased in his favor if confirmed by the GOP controlled Senate?