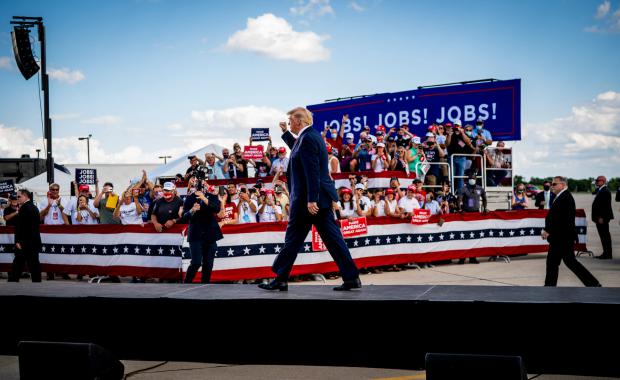 Trump Regime Hostile to US Workers

Both right wings of the US one-party state support endless wars by hot and other means, corporate empowerment, privileged interests over the general welfare, and police state toughness on nonbelievers.

This article is largely about Trump. Like most others in Washington, he rejects governance of, by, and for everyone equitably.

A Biden/Harris regime if defeats him in November will likely go beyond his disdain for ordinary people everywhere by risking global war, what Trump avoided — so far.

Throughout his public life, he backed one US preemptive war after another on nonbelligerent nations threatening no one — showing contempt for world peace and stability.

Her gender, race and cultural roots are non-issues. Her choice as Biden's running mate is all about her support for Dem party dirty business as usual policies across the board.

Given clear signs of Biden's cognitive impairment, will electing him elevate Harris to the nation's highest office? Perhaps that's a key reason behind her choice as running mate.

His mangled, incorrect remarks at times give pause about whether he's able function in office properly and be able to finish his term.

Whether Trump gets an encore or Biden/Harris succeed him in January, dirty business as usual won't miss a beat.

Of most concern is who'll do more damage.

As strongly as I oppose Trump, I fear a Biden/Harris combo is more dangerous — notably upholding a longstanding US tradition of Dems waging more preemptive wars than Republicans.

That said, the Economic Policy Institute (EPI) explained "50 reasons" why the Trump regime has been bad for American workers.

Topping MY list is made-in-the USA economic collapse, worse than the Great Depression with no jobs creation or other government programs initiated to turn things around.

Sharing the top spot on my list is made-in-the-USA COVID-19. Combined with engineered economic collapse, they're a diabolical scheme to transfer unprecedented amounts of wealth to privileged interests.

Below are some of the reasons EPI cited:

Instead of protecting and fighting for workers as promised, Trump has "systematically done the opposite."

He consistently supports privileged interests exclusively at the expense of public health and welfare.

From day-one in office, he's been anti-worker.

He "failed to support adequate fiscal stimulus" during economic collapse and mass unemployment when large-scale federal aid is needed.

He suspended funding for Social Security on the phony pretext of pandemic relief.

Throughout his tenure, he's been against government involvement in healthcare, wanting Americans on their own to provide what's increasingly unaffordable for millions of US households.

He narrowed the scope of worker rights to bargain collectively for better wages, benefits, and working conditions — supporting corporate America and profit-making exclusively over ordinary people needs and rights.

He's unapologetically hostile to immigrants, asylum seekers, and refugees of the wrong race, religion and ethnicity.

He's been racist throughout his private and public life, as well as disdainful toward women, treating them as sex objects.

All politicians lie. Trump does it to the extreme, making it impossible to believe most everything he says.

He "failed to act to protect the health of workers during the pandemic," said EPI.

On his watch, OSHA "rejected a petition by unions representing affected workers and by the AFL-CIO for mandatory rules to protect workers from exposure to the coronavirus on the job."

He called for states to deny unemployment insurance benefits to workers unwilling to return to unsafe jobs and/or unsafe working conditions.

He "excluded millions of workers from paid leave provisions in the Families First Coronavirus Relief Act (FFCRA)" — including millions of healthcare workers and first responders.

His NLRB suspended all union elections in March, then permitted them by mail ballots provided employers agree to this arrangement.

He backed policies making it harder for workers to organize.

He encouraged offshoring of jobs to low-wage countries while rhetorically opposing the practice.

He made it easier for employers to avoid paying extra for overtime work.

He denied workers a minimum wage increase by opposing the House passed Raise the Wage Act — to increase the federal minimum wage to $15 an hour by 2025.

He weakened standards for mine safety inspections.

He backed tax cuts for corporate and high-net-worth individuals at the expense of ordinary Americans.

He "made it easier for contractors who violate basic labor and employment laws to be awarded contracts paid for by taxpayer dollars."

Think Biden if elected will change things for the better? Think again.

As unacceptable as things are now, I greatly fear a Biden/Harris regime will escalate ongoing US forever wars and launch new ones.

Perhaps Iran will be a prime target, maybe belligerence along Russia's borders, perhaps confrontation in the South China Sea and/or Taiwan Strait.

Dems in power will also likely continue neoliberal harshness that benefits corporate America and the rich at the expense of the great majority.

I support either voting independent to make a statement or staying home.

As for Trump v. Biden, I reject both, but if forced to choose between them, I'd go with the incumbent over what I fear would be the most recklessly dangerous regime in US history if Biden beats him — making the country less safe and more unfit to live in than already.