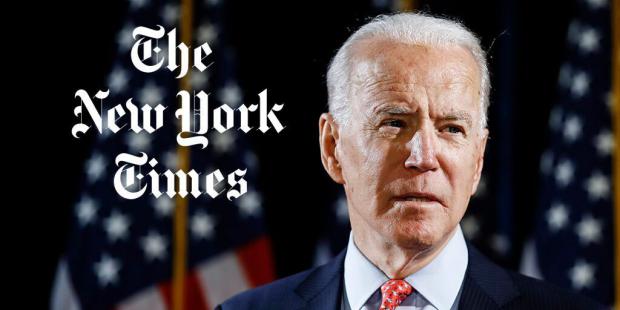 As part of its one-sided pro-Biden/anti-Trump coverage, the Times claimed that DJT filed "no income taxes at all in 10 of the previous 15 years — largely because he reported losing much more money than he made," adding:

"His reports to the IRS portray a businessman who takes in hundreds of millions of dollars a year yet racks up chronic losses that he aggressively employs to avoid paying taxes."

According to tax attorney Stephen Fishman, business owners can deduct losses from income.

The business may be structured to allow operating losses from personal income.

If Trump's returns complied with the US tax code, he committed no violation of federal law.

Short of directly accusing him of tax fraud, the Times suggested it, saying he "aggressively…avoid(s) paying taxes."

So do virtually all enterprises and their management, employing financial experts to assure maximum tax avoidance.

Left unsaid by the Times is that federal or other tax avoidance is legal if in compliance with the tax code.

Since Trump announced his candidacy for president in June 2015 to the present day, the Times waged no holds barred editorial war on him for the wrong reasons, ignoring key right ones.

After unapologetically functioning as Hillary's press agent in 2016, the Times never forgave Trump for defeating her.

Seeking revenge ahead of the November 3 presidential election, the self-styled newspaper of record is operating as a virtual Biden campaign mouthpiece.

The broadsheet systematically ignores his near-half century of shilling for powerful interests, his support for US wars of aggression throughout his time in office, his deference to Wall Street and other corporate predators over the general welfare, his racist history and US gulag prison system backing.

Defying reality, the Times falsely claimed that "no evidence (shows) improper influence or wrongdoing by the former vice president" regarding his son Hunter's dubious dealings as a Ukrainian Burisma Holdings board member.

He was paid around $50,000 monthly to give the company access to the Obama/Biden White House at the time when it was accused of involvement in a UK money laundering operation.

In a sworn statement ignored by the Times and most other establishment media, Shorkin accused Biden of "directly manipulat(ing) the political leadership of Ukraine on false pretexts…"

"If the prosecutor general is not fired, you're not getting the money" — referring to a US billion dollar loan guarantee for Kiev.

Biden added: "Well, son of a bitch. He got fired. And they put in place someone who was solid at the time (sic)."

There's more that the Times conveniently ignored in support of the former vice president.

In November 2014, months after the Obama/Biden regime's coup in Ukraine, replacing democratic governance with pro-Western fascist tyranny, Biden and coup point person in Kiev Victoria Nuland arrived in the city.

They discussed US plans for escalated war without mercy on Donbass freedom fighters, citing nonexistent "Russian aggression" in Ukraine — a longstanding US specialty, not how the Russian Federation operates.

They promised US political and military support for endless war in Donbass — still ongoing intermittently over six years later.

US-installed Nazi-infested fascist rule in Ukraine is a cancer in Europe's heartland.

Biden was Obama regime point man in charge of transforming Ukraine into a US vassal state.

There's plenty about Trump to criticize, far more disturbing about Biden's wrongdoing as US senator and vice president since the 1970s.

Instead of fair and balanced reporting, what journalism is supposed to be, the Times one-sidedly cheerleads Biden, ignoring his rap sheet of shame, while bashing Trump relentlessly.

Character assassination is its modus operandi.

So is yellow journalism — inventing reasons to maintain a steady anti-DJT drumbeat in support of the former vice president.