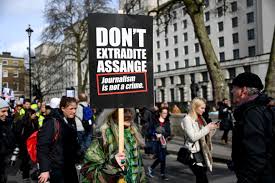 A public figure for nearly half a century, Biden is no ordinary undemocratic Dem.

Businessman/geopolitical know-nothing Trump has been manipulated by dark forces surrounding him throughout his time in office.

Ignoring the rights and welfare of ordinary Americans, he's served privileged interests exclusively throughout his tenure.

The choice between him and Biden is none at all, assuring same old, same old whoever serves as US president for the next four years.

Ordinary Americans have no say over who leads them or how the country is run — for privileged interests exclusively at the expense of most others.

Instead of explaining America's dismal state, a fantasy democracy at war on humanity at home and abroad, establishment media support what demands denunciation — notably the self-styled newspaper of record NYT, its daily editions a national disgrace.

Its management and editors one-sidedly back Biden over Trump — a repeat of their press agent services for Hillary in 2016.

It's how the Times operates on all major issues, notably geopolitical ones, especially about sovereign independent governments the US aims to topple.

In the run-up November 3 election day and what follows, all-out Times support for Biden over Trump continues, a steady drumbeat of one-sided reporting — polar opposite what journalism is supposed to be.

It was long ago abandoned by the Times and other establishment media, advocacy and propaganda replacing it.

In 2016, Hillary reportedly was wired with an earpiece in her first "debate" with Trump, material fed her to respond.

Was Biden wired the same way on Tuesday to offset his cognitive decline, forgetfulness, distortion of facts, and bumbling remarks?

Omitted from Times reports is any of the above or that Biden matched Trump's disgraceful performance in a process pre-scripted against him.

Both figures engaged in 90 minutes of bare-knuckled brawling sans truth-telling on issues raised.

Filled with misinformation and disinformation, they're unrelated to informative give-and-take discussions of major domestic and geopolitical issues.

They aim to solidify base support and win over undecided voters.

The US political process was tainted from inception, so-called "debates" doing nothing to improve what's too debauched to fix.

Times editors accused Trump of "vandalizing the principles and integrity of our democracy (sic)."

No democracy exists to vandalize. Dems and Republicans share equal responsibility for a process lacking legitimacy.

Defying reality about unindicted war criminal/dirty politician Biden, the Times described him as a figure "trying his best to do his job, trying to bring some normalcy to" to America (sic).

So-called Tuesday moderator Chris Wallace bias for Biden over Trump was on display for viewers to see.

According to Real Clear Politics, his "overt defense of Joe Biden throughout the debate on Tuesday night was so obvious, so blatant, he should be proscribed from ever moderating a debate again," adding:

He was "Biden's protector, his advocate…Questions were designed to aid Biden, to coddle him."

"No wonder Trump felt duty-bound to interrupt. (He) was debating both Wallace and Biden."

"Wallace's intent was clear: sabotage Trump," shaming himself before a national audience."

Followers of my writing know I sharply criticize Trump time and again.

I also support democracy the way it should be, what's nonexistent in the US.

What's going on in the run-up to November 3 looks like the deck is unfairly stacked against Trump.

US federal elections are notoriously opposite what a free, fair, and open process is supposed to be all about.

When held, dirty tricks are commonplace.

It's been this way since the early 19th century. Examples are numerous, losers becoming winners time and again.

According to historian Robert Caro, it wasn't "the only (US) election…ever stolen, but there was never such brazen thievery" to that time.

With USPS involvement this year because of expected large-scale mailed in ballots, not counting them all is an added concern.

Despite losing to Al Gore in 2000 and John Kerry in 2004, GW Bush served two terms as president — electronic ease and majority Supreme Court justices elevating him to power.

Will something similar happen this year if results are close and aren't known until days or perhaps weeks post-election?

Can he do it again in November or is the deck stacked for Biden to succeed him?

The Times and most other establishment media are going all-out for the challenger over the incumbent — featuring yellow journalism.

Whatever the result on November 3 — including for which wing of the one-party state controls Congress — ordinary Americans will lose like most often before so privileged ones can benefit at their expense.

It's the American way, a deeply corrupted system far too debauched to fix.