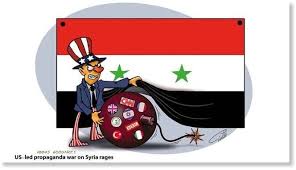 With no public debate or acknowledgement, hardliners in Washington usurped power.

Days after 9/11, Clark learned from Pentagon commanders that plans were made to "destroy the governments in seven countries."

Besides Afghanistan, Yemen, and partnering with Israeli wars on Palestinians, they include Iraq, Syria, Lebanon, Libya, Somalia, Sudan, and Iran.

"Our first objective is to prevent the re-emergence of a new rival, either on the territory of the former Soviet Union or elsewhere…"

"This is a dominant consideration underlying the new regional defense strategy and requires that we endeavor to prevent any hostile power from dominating a region whose resources would, under consolidated control, be sufficient to generate global power."

Adopted by both right wings of the US war party, his doctrine is all about waging endless wars by hot and other means for unchallenged control over all other nations, their resources and populations — what the scourge of imperialism is all about.

The Obama regime's preemptive war on nonbelligerent Syria over nine years ago was and remains part of Washington's aim for controlling the Middle East and its vast hydrocarbon resources — in cahoots with junior partner Israel and key NATO countries.

Russia's legitimate involvement from September 30, 2015 to the present day — at the request of Syria's government — turned the tide of battle from defeat of its forces to liberation of most of the country.

Illegal occupation of northern Syria by US and Turkish forces, along with Pentagon troops in the country's south, prevent conflict resolution.

"A total of 865 gang leaders and more than 133,000 militants, including 4,500 militants from the Russian Federation and the CIS countries (US supported jihadists) have been eliminated," adding:

"The operation in Syria has demonstrated the fundamentally increased capabilities of the Russian Armed Forces, the ability to successfully defend national interests in any part of the world, as well as the readiness to provide military assistance to its allies and partners."

"A total of 98% of military police units' personnel, 90% of Russian pilots, and 60% of sailors gained real combat experience" in Syria.

Over 44,000 sorties were conducted to the present day. Long-range cruise missiles were used against high-priority targets.

Surface and sub-service vessels carried out around 100 strategic strikes against ISIS and other US supported jihadists — dozens more by long-range bombers to destroy their infrastructure.

Shoigu believes that the threat posed by ISIS in Syria is neutralized.

Its Khmeimim airbase facilities are suitable for all its combat and support aircraft.

Its Tartus naval base can accommodate numerous ships. Its state-of-the-art facilities include vessel servicing, maintenance and repair capabilities.

Russian operations prevented the Syrian Arab Republic from becoming a US vassal state.

Its involvement also helps maintain a regional balance of power.

Despite important strategic accomplishments in the past five years, war in the country continues because of foreign occupation.

According to Southfront, "Russian troops broke through a US blockade and entered eastern Syria, erecting a checkpoint along a road in Hasaka," adding:

"The Russian military convoy, despite the opposition of the Americans, managed to break through into the eastern part of northern Syria."

Russia's new military checkpoint blocks movement of US troops, weapons and equipment from Iraq into Syria.

It also blocks transport of stolen Syrian oil by the US into Turkey.

"In cooperation and coordination with Turkish regime-backed terrorists, the Turkish Grain Board (TMO) started to loot the wheat and barley crops which are stolen from (Syrian) farmers" — citing local sources, adding:

They're smuggling them cross-border into Turkey.

Shoigu's claim about the elimination of ISIS in Syria was somewhat exaggerated.

US sanctions war on Syria is all about wanting its people starved into submission — notably by last June's so-called Caesar Syria Civilian Protection legislation (Caesar Act) that has nothing to do with protecting its people.

The measure threatens sanctions on nations, entities and individuals that maintain legitimate economic, financial, military, and intelligence relations with Damascus — their legal right under international law.

On Wednesday, the Trump regime imposed new sanctions on Syria.

According to a Treasury Department statement, 13 Syrian entities and individuals were blacklisted.

US war by hot and other means on the Syrian Arab Republic aims to eliminate its sovereign independence.

Russia's involvement in the country is a powerful counterforce against US imperial objectives.