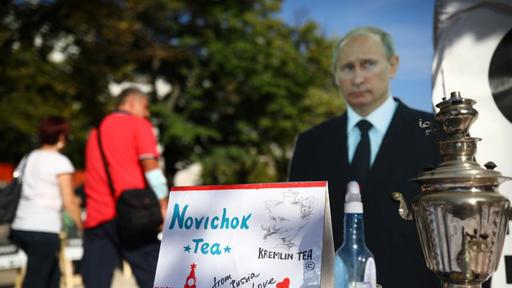 Backed by the CIA and NED, convicted embezzler, phony anti-corruption fighter, self-serving opportunist, political nobody with scant public support Navalny operates as a pro-Western agent for regime change in Russia.

Claims by Germany that he was poisoned by a deadly novichok nerve agent — able to kill anyone exposed in minutes — are belied by his recovery.

Whatever caused his illness had nothing to do with toxic poisoning.

No evidence or motive suggests Russian responsibility for his condition, nothing connecting Putin to his illness onboard a flight to Moscow.

What's unlikely is possible because of heavy Trump regime pressure on Berlin, wanting US LNG producers benefitting at Russia's expense.

"This is not a bilateral case, but a crime (sic) that occurred on Russian territory and that violates the Chemical Weapons Convention (sic), which makes it also an international issue (sic)," adding:

"We will wait for the results from the OPCW and then we will discuss the necessary response within the European Union."

"We urged Russia, and I am doing this once again today - to carry out a full-scale and transparent investigation into the attack (sic)."

No evidence of Navalny's poisoning exists, clearly not by a deadly nerve agent, none indicating he was attacked.

Failure by Merkel's government to provide Russian investigators with facts to show Navalny was harmed by toxins prevents them from probing the issue fully.

On October 1, Der Spiegel published an interview conducted with Navalny.

Ignoring heroic efforts by Russian doctors in Omsk to save him, he credited medical providers in Berlin instead.

"There was a meeting…(It was) a private visit and a conversation with the family. I'm very grateful to Chancellor Merkel for visiting me in the hospital."

It's unusual and suspect for a head of state to visit a political nobody under any circumstances without an ulterior motive in mind.

Earlier Merkel said that during Navalny's stay in Germany he's a "guest of the chancellor" — falsely calling his illness "attempted murder, (a) crime intended to silence him (sic)."

Der Spiegel quoted him saying he's doing "much better than three weeks ago, and things are getting better each day."

According to German doctors, he'll likely regain 90 - 100% of his former self physically.

What Der Speigel failed to say is that if he was poisoned by novichok exposure, he'd be dead.

Telling the publication that "(t)here aren't many people you can observe who are still alive after being poisoned with a nerve agent" ignored what would have sealed his fate if poisoned by novichok exposure — what clearly didn't happen.

"I assert that Putin was behind the crime (sic), and I have no other explanation for what happened (sic)," adding:

"When my hands shake, it's not from fear. It's from this stuff. I would not give Putin the gift of not returning to Russia."

As a Russian citizen, Moscow said he's free to return whenever he wishes — with nothing to fear if comports himself according to law.

The same standard applies for all Russia citizens.

Asked if he thinks Berlin should suspend or reject Nord Stream 2's completion, he said it's "Germany's business," adding:

It policies toward Russia should "take into account the level of insanity that Putin has reached (sic)" — again likely reciting remarks scripted by his CIA handlers.

On Thursday, Peskov said Moscow has credible information showing that Navalny operates in cahoots with the CIA, explaining the following:

"This is not the patient who works with the Western special services."

"These are the Western special services who work with him. This is a more precise wording."

"Yes, we do have such information. I can even be more specific: CIA staffers are working with him today. It is not the first time that he receives different instructions."

As for (likely CIA-scripted remarks he made about Putin), they're "absolutely groundless and unacceptable," Peskov stressed.

"We consider some of the statements in the (Der Spiegel) article insulting, extremely insulting and unacceptable."

"We want to investigate the case with the Berlin patient and determine the reasons for what happened."

"To do that, we need to get the information from those who found traces of (alleged) poisoning in the analysis."

Navalny is a fifth column traitor, a CIA collaborator, a con man/Judas goat, a Russian Benedict Arnold, a figure with no legitimacy.

What German and other EU officials know they won't publicly admit.