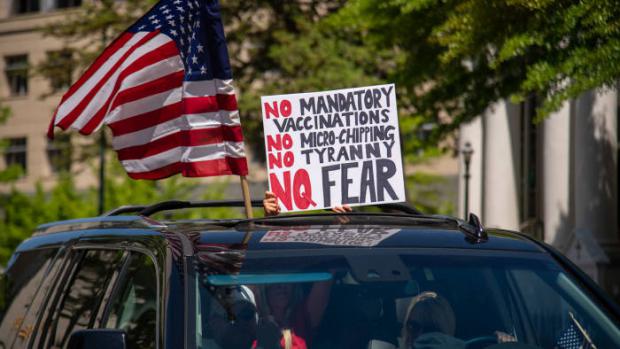 On Friday, Trump tweeted the following:

"Tonight, (he and his wife Melania) tested positive for COVID-19. We will begin our quarantine and recovery process immediately. We will get through this together!"

On Thursday, counselor to Trump Hope Hicks tested positive for the illness.

According to a White House statement, Trump is experiencing "mild symptoms."

On Friday, Pence and his wife tested negative for COVID-19.

White House physician Dr. Sean Conley said he expects Trump to "continue carrying out his duties without disruption while recovering."

He and wife Melania are quarantined for 14 days.

It's unclear how contracting COVID-19 will affect his reelection campaign, including two more "debates" with Biden, the next one scheduled for October 13.

According to the average of most recent Trump v. Biden polls, only about 7% of voting-age Americans are undecided, Real Clear Politics reported.

Will Trump's illness be more likely to help, not hurt, his reelection prospect, perhaps gaining a few sympathy support points?

On Friday, likely continuing through the weekend, and perhaps longer, his infection from COVID-19 is dominating news coverage in the US, West, and elsewhere — in America over other domestic and geopolitical issues.

Best wishes for a speedy recovery are pouring in from world leaders.

One observer darkly said that Trump finally tweeted something positive — a negative for his health, notably for someone his age (74) and overweight condition.

Will he blame Beijing for made-in-the-USA COVID-19 that infected him?

He can also use his illness to claim he's "working so hard to serve the country that even he contracted the virus" and perhaps gain increased voter support.

It's unclear whether it will "help revive his imperiled reelection bid" or help him.

Trump and his wife Melania "paid the price for his gamble to play down the COVID-19."

Vladimir Putin wished him a "speedy recovery…voic(ing) sincere support in this tough moment."

Iranian state television announced the news of his illness with an unflattering DJT image.

How will Trump and his wife Melania be treated? A COVID-19 cure exists.

Hydroxychloroquine (HCQ) combined with either azithromycin or doxycycline and zinc is highly effective.

HCQ has been around for decades. It's widely available in generic form, cheap, and safe when used within 10 days after COVID-19 infection is diagnosed.

"I want (skeptics) to show…how it doesn't work."

"How is it going to work for 350 patients for me, and they are all alive, and then somebody says it doesn't work?"

Immanuel explained that she had 100% success in treating 350 COVID-19 patients by using HCQ combined with azithromycin and zinc.

She and other doctors she knows are taking HCQ prophylactically.

Despite being in direct contact with COVID-19 ill patients regularly, none contracted the disease.

Trump earlier said he took HCQ prophylactically. Will he go on it again together with one of the above two-mentioned antibiotics and zinc — in lieu of toxic meds and/or an experimental Pharma vaccine.

According to CNBC on Thursday, "(h)igh fever, body aches, headaches and exhaustion are some of the symptoms participants in Moderna and Pfizer's coronavirus vaccine trials say they felt after receiving the shots."

What's unclear but perhaps likely is that individuals experiencing these symptoms may face longer-term or permanent health problems.

All vaccines contain toxins and are harmful to human health.

Rushing development for widespread availability late this year or in early 2021 so Pharma can cash in big on a potential profit-making bonanza is playing Russian roulette with human health — risking mass casualties.

One test subject said he was mildly ill for a few days with a low-grade fever after being vaxxed.

Eight hours after his second shot, he experienced a moderately high fever, shakes, chills, a severe headache, shortness of breath, and a pain in his arm where vaxxed feeling like a "goose egg on (his) shoulder."

No one should voluntarily permit dangerous toxins to be injected into their bodies.

All vaccines are hazardous to human health because of toxins they contain.

Often they cause diseases they're promoted as protection against.

Nothing in medical science indicates that vaccines are safe.

Squalene adjuvants and other toxins they contain harm the human immune system, making it susceptible to numerous illnesses and diseases that range from very annoying to life threatening.

Their rush to cash in big will likely harm countless numbers of people because of their greed.

Vaccines are all about profit-making regardless of the risks to human health.

It's unaccompanied by media promoted fear-mongering mass hysteria and lockdowns when ordered — convincing most people to voluntarily accept house arrest, turning normal daily life upside down, contributing to economic collapse in the US and elsewhere.

Americans are being conned into being vaxxed to protect against COVID-19.

Going along risks harm to their health in lieu of safe, inexpensive, and effective HCQ together with either azithromycin or doxycycline and zinc.

Noted vaccine expert Dr. Viera Schiebner stressed that "(t)here is no evidence whatsoever of the ability of vaccines to prevent any diseases."

"To the contrary, there is a great wealth of evidence that they cause serious side effects."

The conclusion is clear. Avoid hazardous to human health vaccines to stay safe.