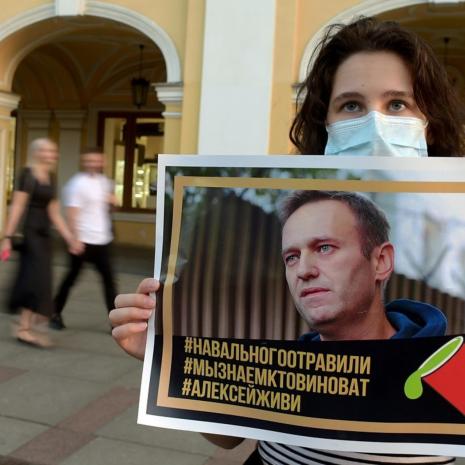 According to Sergey Lavrov on Monday, Russian "(d)octors in Omsk did not find any traces of chemical warfare agents. They honestly said this," adding:

"But I would like to draw your attention that the fact that  Charite clinic (German doctors) also did not find any toxic substances in its analyses."

"Instead, they were 'found' later in the Bundeswehr's clinic" by the country's military.

"We still do not know: did the French and the Swedes carry out the test themselves, or were they simply given them by the Germans."

"And the fact that our partners are trying to keep everything a secret, to muddy the waters, is something that worries us greatly."

"We want to find the truth, and we will seek to do so."

The books are cooked against Russia — by dark forces in Germany and the EU in cahoots with the US, part of their long war on Moscow by other means.

Lavrov has no doubt that the bloc will impose unlawful sanctions on Russia over this issue — based on Big Lies, despite knowing that Moscow had nothing to do with Navalny's illness that was unrelated to novichok or other toxins.

Reuters and German media reported that Berlin expects EU sanctions on Russia for the Navalny incident.

The issue will be discussed by bloc leaders at a summit scheduled for October 15 and 16.

Asked last week if EU sanctions on Russia will include suspending or halting its Nord Stream 2 gas pipeline to Germany, Merkel's Foreign Minister Heiko Mass suggested it won't be targeted.

Over 100 European companies are involved in the project, half the number in Germany, he said, adding:

"(M)any European workers would suffer from a construction freeze."

"We have taken note that the latest portion of far-fetched and groundless accusations and threats made by the highest-ranking German politicians against Russia included a paradoxical idea of Russia's alleged unwillingness for dialogue with Germany within the framework of the existing specialized bilateral mechanisms."

Russia's ministry called unacceptable remarks "outright lies" — by liars who know they're lying but do it anyway, risking harm to relations with Russia.

Instead of cooperating with Moscow on the Navalny issue, Berlin refuses to provide its officials with information on his case.

"We continue to insist that Germany respond to these requests," said Russia's Foreign Ministry.

"No answers have been provided to our questions at the level of political dialogue or through diplomatic channels."

"The Russian Embassy in Berlin has received the German Foreign Ministry's refusal to grant consular access to Navalny."

"German doctors who came to Russia were given free access to Alexey Navalny and the results of his treatment at the Omsk Hospital and signed the documents on the patient's transfer into their professional care."

Moscow urges fact-based dialogue with Germany on this issue — no further stonewalling by its authorities.

In the aftermath of what happened, anti-Russia establishment media propaganda rages.

None exists so they invented it, citing a novichok-tainted water bottle in his Tomsk, Russia hotel room he allegedly drank from.

Without protective clothing, they removed the bottle, sending it to a Germany military lab for analysis.

If tainted by novickok as claimed, exposure would have been lethal in minutes, likely while still inside the room.

If Navalny was poisoned by novichok from the water bottle — causing death in minutes from exposure — he'd have perished before ever leaving his room for a flight to Moscow.

What's obvious is suppressed by establishment media on matters relating to nations on the US target list for regime change and much more.

Russian elections when held mock farcical US ones.

In the US, there's only one with two right wings — the war party, what some observers call the money party because Big Money controls the process, along with party bosses.

Ordinary Americans have no say over who leads them or hold high congressional posts — its system a fantasy democracy, never the real thing.

In September, CIA asset Navalny was nominated for this year's Nobel peace prize.

Time and again, it goes to belligerents and other unworthy honorees, peacemakers shunned.

It won't surprise if convicted embezzler, anti-Russia traitor, Western media darling Navalny is named winner of the prize on Friday.

It's longstanding Nobel tradition to honor the worst while spurning those most worthy.