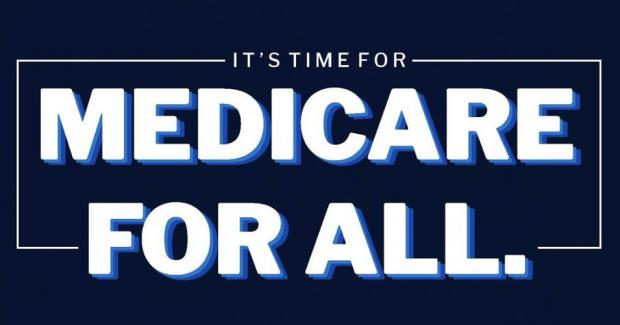 Medicare for All When Most Needed

Republicans and Dems support world-class healthcare — based on the ability to pay.

They oppose government-funded, tax supported Medicare for all — a fundamental human right they ignore.

Obamacare is all about a healthcare rationing scheme that benefits insurers, Big Pharma, and large hospital chains — at the expense of assuring healthcare the way it should be for all Americans.

It's up to people power to go all out for what should have been the law of the land long ago:

Universal healthcare, all Americans covered, no one left out, including for prescription drugs, dental care, physical therapy for injuries, non-hospitalized rehab for health issues as needed, and nursing home care.

Public Citizen's "Holes in the Safety Net" report explained that at a time of economic collapse in the US, millions of ordinary Americans lost jobs and healthcare coverage.

A national emergency exists for millions without it.

According to Public Citizen (PC), over half of US agricultural workers are insured.

Lack of healthcare coverage for meat-packing workers is around 15%.

For most US workers with coverage, it's inadequate.

Farm workers have been especially hard it. They can't social distance at work and live in close quarters, said PC.

Many are undocumented immigrants, lacking adequate working conditions and protections.

Meatpacking plants are Covid hot spots because workers operate in close contact with others.

They're hampered as well because Covid droplets linger in poorly ventilated workplaces.

Outbreaks occurred in over 500 meat and poultry facilities nationwide.

According to PC, among 20 work sectors whose employees "are least likely to have health insurance…11…are subsets of the construction industry."

Many workers are part-time or on contract with few or no benefits.

Many workers in other sectors are unable to social distance properly, wash hands as needed with soap and water, or use an alcohol-based hand sanitizer for protection.

As a time of mass unemployment, underemployment, contracting serious illness can be financially devastating.

"(T)he argument for Medicare for all has never been stronger" than today, said PC, adding:

"Throughout history…essential (US) workers have always kept this country afloat despite overwhelmingly inequitable circumstances."

"It's time to show…gratitude by passing Medicare for all to ensure (they're) protected."

What's essential for them holds for all Americans, especially during the hardest of hard times.

Physicians for a National Health Program (PNHP) is in the forefront of advocacy for a fundamental human right long denied millions of disadvantaged Americans.

Federal, state, and local public health is woefully underfunded when what they provide is most needed.

Inadequate federal aid was provided to states and local governments.

According to PNHP, around 30 million Americans had no healthcare pre-Covid outbreaks. Another 44 million were way underinsured. Conditions today are much worse.

About one-fourth of "non-elderly adults were either uninsured, or avoided seeing a doctor in a given year because of costs," PNHP explained.

"Uninsured patients (arriving in US) emergency rooms with pneumonia or exacerbations of obstructive lung disease are more likely than those with insurance to be discharged (and sent home untreated) instead of admitted" for hospitalization.

In 2018, the average cost of hospitalization of pneumonia "for patients with complications and co-morbidities was $20,292."

Because of stiff deductibles and co-pays for most insured Americans, high-cost illnesses can be "ruinous" to millions of Americans who struggle daily to juggle financial commitments.

The US the world's only developed country without some form of universal healthcare coverage.

High US healthcare costs are double the amount of other developed countries.

They're the leading cause of personal bankruptcy.

Most Americans with jobs live from paycheck to paycheck with scant or no savings.

They're woefully unprepared for economic hard times, especially what's likely to be protracted like now.

At all times — but especially hard times like now — universal healthcare is essential.

Along with food, shelter and clothing, it's a fundamental human right.

When based on the ability to pay like the US system, millions lack essentials to health and welfare.

Medicare for all is an idea that arrived long ago.

During what may be a second Great Depression — exceeding the worst of the earlier one and be long-lasting — lack of healthcare when essential is cruel and can be a matter of life or death.