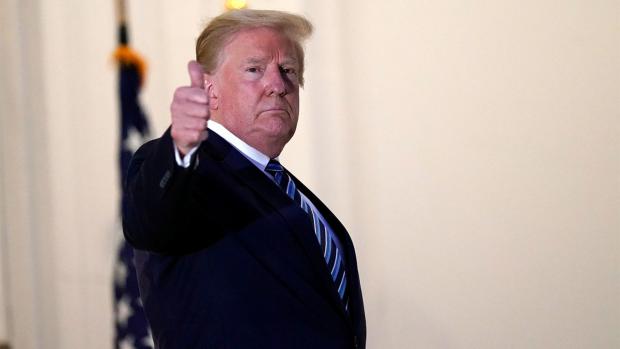 On Monday, after three days of hospitalization for reported Covid illness, Trump was discharged.

He returned to his White House residence away from staff to continue recovering.

Is he ill from Covid infection, seasonal flu/influenza, or something else?

According to the Centers for Disease Control and Prevention (CDC):

"Detection of viral RNA may not indicate the presence of infectious virus or that 2019-nCoV is the causative agent for clinical symptoms."

The above means that a positive for Covid test result does not necessarily confirm illness from the disease.

It may indicate seasonal flu/influenza or a common cold — in both cases ranging from mild to more severe.

It begs the question: Why are unreliable tests used that are unrelated to accurate disease diagnosis?

Why is the medical community using and relying on them?

Is their widespread use all about creating mass hysteria fear-mongering — establishment media part of the diabolical scheme?

Ordinary people in the US and abroad were manipulated into accepting mandatory or voluntary house arrest.

It wrecked economies, their livelihoods and welfare.

It potentially harmed their emotional and perhaps physical health — while transferring enormous amounts of wealth to super-rich interests.

Independent health experts are unsure whether official reports about Trump's illness are accurate or otherwise.

If the timeline is accurate, he became ill eight days ago as of Tuesday October 6.

If seriously ill from Covid disease, he shouldn't have been discharged.

According to Thailand Medical News, Covid disease by age group 70 - 79 is as follows:

Mixed messages on Trump's health status leaves unanswered whether his illness is serious, mild, or something in between.

It's unclear precisely what illness he contracted.

Reportedly on Friday, he experienced a high fever and low blood oxygen level, prompting his medical team to order hospitalization.

According to medical experts, oxygen levels below 94 may indicate severe Covid illness.

On Friday and Saturday, Trump's reported oxygen level dropped to 93, why reportedly he was given supplemental oxygen.

His experimental drug regimen is potentially hazardous to human health, especially for someone his age (74) and obesity (around 240 pounds).

He's on remdesivir shown to cause kidney disease.

According to nephrological experts, including Johns Hopkins University researchers, over half of seniors in their mid-70s or older have mild or more advanced kidney disease.

It's part of the aging process. Body parts wear out gradually over time.

Trump's use of redemsivir that's unrelated to curing Covid illness — if reports about his drug regimen are accurate — is playing Russian roulette with his kidney functioning and overall health.

Dr. Conley said Trump was given dexamethasone on Saturday, perhaps Sunday as well.

It's a steroid drug used for patients diagnosed seriously ill from Covid disease.

It's highly atypical for patients with mild Covid symptoms.

In July, the New England Journal of Medicine published a mixed assessment of the drug.

It can be beneficial in treating severe Covid illness. It works by suppressing abnormal immune responses that can damage bodily organs. It doesn't cure Covid disease.

At the same time, its side effects are potentially harmful to human health — why the drug should only be administered in extreme cases.

"Dexamethasone is the most mystifying of the drugs we're seeing him being given at this point" — if reports are accurate.

"The steroid is normally not used unless the patient's condition seems to be deteriorating."

"It raises the question: Is (Trump) sicker than we were told, or are the doctors overreacting in a way that could be potentially harmful?"

As of Monday, Trump is back at the White House around a week after reportedly falling ill.

There's a thin line between Covid disease and seasonal flu/influenza — the latter not accompanied by mass hysteria, fear-mongering, lockdowns and economic collapse.

What's going on this year is an instrument of social control, repression, and transferring wealth to the nation's privilege class at the expense of most others.

A steady drumbeat of fear-mongering reports drown out alternative views.

Community Health Sciences and Surgery Professor Joel Kettner earlier said the following in response to what's going on in the US:

"I'm not talking about the pandemic because I've seen 30 of them, one every year. It is called influenza."

Less than 800 died from the illness. Since 2004, no further cases were reported anywhere.

At the time, the CDC said: "SARS is no longer a threat in the world today."

"I am deeply concerned that the social, economic and public health consequences of this near-total meltdown of normal life — schools and businesses closed, gatherings banned — will be long-lasting and calamitous, possibly graver than the direct toll of the virus itself."

"The unemployment, impoverishment and despair likely to result will be public health scourges of the first order."

What's gone on throughout 2020 confirmed his worst fears.

A Greater Depression is unfolding in real time. Things may worsen ahead and be long-lasting for ordinary Americans and others elsewhere.

According to a JTN/RMG poll conducted from 10/1 - 10/3, at least two days after Trump's reported illness, Biden is ahead by 8 points.

Whatever the results of US November elections, harder than ever hard times affect most ordinary Americans.

Things are most likely to be long-lasting and greatly detrimental to their health, welfare and futures — no matter which wing of US duopoly rule runs things.