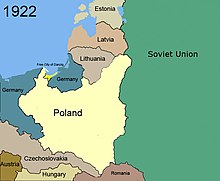 Poland is notoriously subservient to US imperial interests — especially on issues relating to Russia.

Both countries share a 144-mile-long border. The US uses Poland as a dagger targeting Russia's heartland.

The same is true for fascist Ukraine, Latvia, Lithuania, and Estonia.

UOKiK head Tomasz Chrostny demanded that these companies terminate its agreement with Russia to complete the project.

In total, five targeted European companies were fined $100 million. A statement by Chrostny said the following:

"Companies (involved in the project) should terminate the agreement within 30 days after receiving the decision (sic)."

"The goal of these companies was common — to finance and construct the gas pipeline."

"It is implemented on account of breaching anti-monopoly laws of Poland (sic)."

"This is a blow that is extremely sensitive for Polish consumers (sic)."

"This is not a decision against a specific company, but it is against violation of the law that undermines competition norms and can lead to monopolization (sic)."

"The construction of Nord Stream 2 is a clear violation of market regulations (sic)."

"(O)nce (the pipeline) is operational, it's likely that gas prices will increase, and there'll be a risk of interruption to supplies (sic)."

The action by Warsaw is all about serving Washington's anti-Russia agenda, unrelated to Polish laws or harming its consumers.

In response to the unacceptable action, Gazprom vowed to retaliate.

Putin spokesman Dmitry Peskov said he "ha(s) no doubt that the corporation will do everything that is possible and needed from the point of view of legal support of some counter-actions."

Commenting on Moscow/Warsaw relations, he said they're "not up to par."

A Gazprom statement said the following:

"The decision of UOKiK violates principles of lawfulness, appropriateness and fair proceedings, while the unprecedented fine amount indicates the decision to oppose implementation of the Nord Stream 2 project by all means."

Gazprom "did not breach antimonopoly laws of Poland."

"In the case of appealing against the UOKiK decision, it is not subject to performance until the relevant court judgment is carried into effect."

Nord Stream 2's route does not cross into Poland's territory. Its ruling authorities have no legal right to challenge the project.

In 2019, Polish President Andrzej Duda met with Trump on working together to undermine completion of Nord Stream 2.

According to US envoy to Poland Georgette Mosbacher, Washington wants the country to be a center in Europe's heartland for re-exporting US LNG to other regional nations.

Actions by Poland to try undermining the project are highly likely to fail like everything else the US did to try halting its completion.