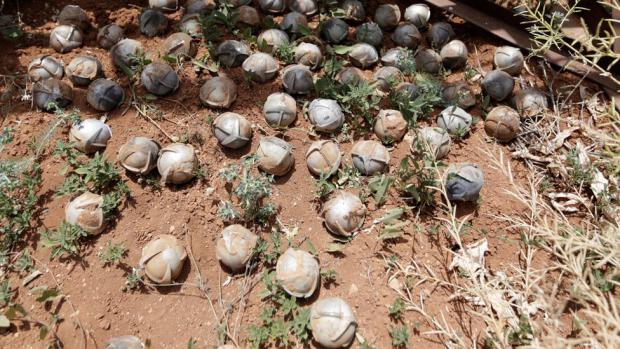 According to reports on the ground, Azeris are using Israeli-supplied cluster munitions in Nagorno-Karabakh.

More on this below.

The 2008 Convention on Cluster Munitions (CCM) bans production use, transfer, and stockpiling of these terror weapons that scatter submunition bomblets over a wide area.

Nobel Peace Prize laureate Jody Williams called CCM "the most important disarmament and humanitarian convention in over a decade."

The US and Israel notoriously use these and other banned weapons in their preemptive wars.

Both countries failed to join over 100 others that are parties to the CCM.

Cluster munitions can be fired by artillery, rockets, and missiles, or air-dropped by warplanes.

Most often, they open when airborne, dispersing multiple submunitions (bomblets) over a wide area.

Acting like landmines, they remain dangerous for years unless professionally destroyed.

In November 2017, a Trump regime war department memo indefinitely delayed implementation of a ban on these weapons.

Current US policy gives military commanders discretion to use them "until sufficient quantities" of "enhanced and more reliable" versions are developed and deployed.

Despite years of research, no  safer substitutes were found.

The US, NATO, and Israel use chemical, biological, radiological, and other banned weapons in all their wars of choice — the human toll never an issue, nor the rule of law.

The Cluster Munition Coalition promotes nonuse of these weapons — a futile initiative as long as they continue to be used by US-led Western countries and Israel.

Remnants of unexploded Israeli Mo95 submunition bomblets were found on the ground.

No evidence indicates that Armenian or NK forces have these terror weapons — either self-produced or obtained from foreign suppliers.

Reports on the ground indicate that Azeri forces used these weapons nearly straightaway after launching war in NK on September 27.

According to Southfront on October 3, "the Armenian Unified Infocenter shared photos showing the remains of Israeli-made M095 submunitions found in a civilian settlement that was the target of an Azerbaijani rocket strike."

"According to the Infocenter, the Azerbaijani Armed Forces carried out the strike using a LAR-160 multiple rocket launch system (MRLS)."

"At least 30 LAR-160 MRLS are reportedly in active service with the Azerbaijani Armed Forces. The Azerbaijani systems are apparently armed with Mk."

"II cluster rockets, which are known to carry M095 submunitions."

Use of these terror weapons against combatants or civilians — designed to indiscrdiminately kill or maim over a distance of several hundred yards — constitutes a war crime.

Preemptive wars of course are the ultimate high criminal actions — the US, NATO, Israel, and their imperial partners guilty time and again.

"In the context of the Nagorno-Karabakh conflict, Russia is a trusted and pro-active mediator between the conflicting sides. Russia plays a crucial role here, and it demonstrated its commitment to finding a peaceful solution to the conflict by brokering a ceasefire on 10 October."

"We must admit that this was a courageous and timely move, even though the Azeri side remained aggressively stubborn and destructive."

After nearly a month of Azeri launched war in NK, it continues because Baku and Turkey's Erdogan want conflict, not resolution.

"We support the friendly and fraternal Azerbaijan in every way possible and we will continue to do it. This struggle will continue until Karabakh is liberated from occupation."

On Friday, he expressed willingness to work with Moscow on conflict resolution — adding that he wants a seat at the table along with Minsk Group countries Russia, France and the US.

At the same time, he added: "Azerbaijan is putting its righteous demand forth" — wanting control over NK instead of Armenia.

That's a prescription for continued conflict, resolution only possible through diplomacy and compromises by both warring sides.