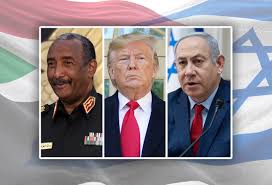 On October 23, Sudan became the third Arab state to normalize relations with Israel.

The UAE in August and Bahrain last month took this step — what Hamas called "a stab in the back of the Palestinian cause…serv(ing) only the Israeli occupation and crimes."

A Palestinian Authority (PA) statement also slammed what it called surrendering to Israeli occupation and annexation of West Bank territory.

Following Sudan's announced normalization with Israel, the PA "condemn(ed) and reject(ed)" it.

Hamas called on the Sudanese people to "fight all forms of normalization and have nothing to do with the criminal enemy."

The Trump regime arranged the deal through typical US pressure tactics and a benefit at a stiff price handed to Sudan's transitional government.

Khartoum was delisted from the State Department's state sponsors of terrorism list.

It's comprised of nations unwilling to sell their soul to the US and its imperial allies.

Currently, they include North Korea, Iran and Syria — nonbelligerent states threatening no one.

In stark contrast, the US, other NATO countries, Israel, and their imperial partners threaten humanity by their endless wars and other hostile actions.

Sudanese Prime Minister Abdalla Hamdok and chairman of the country's transitional Sovereignty Council Abdel Fattah al-Burhan agreed to bow to the will of Washington and Tel Aviv.

They agreed to pay $335 million in compensation for two 1998 truck bomb explosions at US embassies in Dar es Salaam, Tanzania and Nairobi, Kenya — causing large numbers of deaths and injuries, few US citizens harmed.

When the incidents occurred, US envoys were not in the facilities.

Weeks before both incidents, Israeli intelligence told US embassy officials to ignore information suggesting a security threat to both facilities.

Security cameras were conveniently turned off. Israeli special forces and Mossad agents were first on the scene after these incidents.

At the time, bin Laden and al-Qaeda were accused of the bombings.

Bin Laden was a CIA asset, al-Qaeda a US creation. If responsible for what happened, they were acting on orders from Washington.

No evidence links Sudan to what either the US, Israel, or regimes in both countries were responsible for.

The US falsely accused bin Laden of all sorts of incidents, including 9/11, the mother of all state-sponsored false flags he had nothing to do with.

"We don't know yet who was at the wheel of those car bombs. But we do know that the long fuse leading to these terrorist flare-ups was lit in Israel."

The US Dar es Salaam embassy earlier was an Israeli compound.

Following a call from Trump and Netanyahu with Hamdok and Burham, a pre-drafted statement said the following:

Sudanese "leaders agreed to the normalization of relations between (their country) and Israel and to end the state of belligerence between their nations," adding:

They "agreed to begin economic and trade relations, with an initial focus on agriculture."

They "also agreed that delegations would meet in the coming weeks to negotiate agreements of cooperation in those areas as well as in agriculture technology, aviation, migration issues and other areas for the benefit of the two peoples."

"The United States will take steps to restore Sudan's sovereign immunity and to engage its international partners to reduce Sudan's debt burdens."

"The United States and Israel also commit to working with their partners to support the people of Sudan in strengthening their democracy (sic), improving food security, countering terrorism and extremism and tapping into their economic potential."

It's unclear what the US and Israel will do for Sudan, other than exploiting the country and its people.

The unacceptable deal hasn't gone down well in Khartoum.

On Sunday, Sudanese parties rejected normalization with Israel, some officials saying they'll form an opposition bloc against the deal they reject.

Street protests occurred over the weekend in Khartoum.

"We see that our people, who are being systematically isolated and marginalized from secret deals, are not bound by the normalization agreement."

"Our people will abide by their historical positions and work through a broad front to resist normalization and maintain our support for the Palestinian people in order for them to obtain all their legitimate rights."

It "contradicts the Sudanese national law…and contributes to the elimination of the peace project in the Middle East and to preparing for the ignition of a new war."

He withdrew from a state-sponsored religious conference on Saturday in protest.

Sudanese Baath Party leader Muhammad Wadaa warned that he and other parties involved in the transitional government will withdraw support if official Sudanese normalization with Israel occurs.

Protesters in Khartoum chanted "no peace, no negotiation, no reconciliation with the occupying entity," expressing support for Palestinians.

A statement by Iran's Foreign Ministry said the following:

"Pay enough ransom, close your eyes on the crimes against Palestinians, then you'll be taken off the so-called 'terrorism' blacklist."

"Obviously the list is as phony as the US fight against terrorism. Shameful!"

Israel's creation and establishment of the CIA happened around the same time in the late 1940s.

The spy agencies of both countries have a long history of state-sponsored criminality.

It's unsurprising that Israel's dirty hands may have been all over the 1998 US embassy bombings in Dar es Salaam and Nairobi.

Maybe Mossad and the CIA partnered in what happened.